In a realistic setting, each cell usually does not have a theoretical uniform distribution of the cell performance due to the cell design and manufacturing, especially for planar-type SOFCs. Electrochemical and mechanical thermal stress on the cells can affect the performances of the cell when the temperature and current gradients across the cell are not uniform. Therefore, direct observations are very important for the conformation of the SOFC reliability.

This research evaluates the overall performances of the current distribution of planar-type SOFCs. With these distributions, clear understanding of the performances can be found of overall cell and at a certain location of the cell, which can help with improvements of the cell and the stacks.

In this research, 5cm x 5cm anode-supported SOFC was used for conducting the experiment. The fuel for anode and the oxidant for cathode were 25 and 50% hydrogen and air. The operating temperature of the furnace was set at 800ºC.

For the equipment, there is a quartz window on the cathode side with thirty-two 0.3mm diameter holes for the voltage probes. For current distribution, distributions of voltages on the cathode current collector, φ, were measured using a digital multimeter.

Although the potential differences are theoretically uniform over the current collector, a slight gradient exists, which makes a lateral current flow towards the current lead. Using the charge conservation equation, the current across the cell can be calculated from the measured potential distribution of the cell.

For the set-up of the potential probes, 0.2mm platinum wires were spot-welded onto the silver mesh at 32 different locations. Figure 1 shows the position of the probe on the silver mesh current collector. To measure the lateral voltages, voltages between the probe #1 and the rest of the probes were measured in respect to the overall current applied across cell. The lead-in current was located next to probe #1 and the lead out current was on the anode side at the lateral position next to probe #13. The current applied to the overall cell were at 0, 1, and 5A (0, 0.0625, and 0.3125 A/cm2).

After measuring the potential across the cell and calculating the current, having only 32 points is not enough to calculate for the current distribution. Only 16 points in the middle of the cell can be calculated, which does not show the smooth transition of the distribution clearly. In addition, a simulation will be also done to compare the data with this experiment. 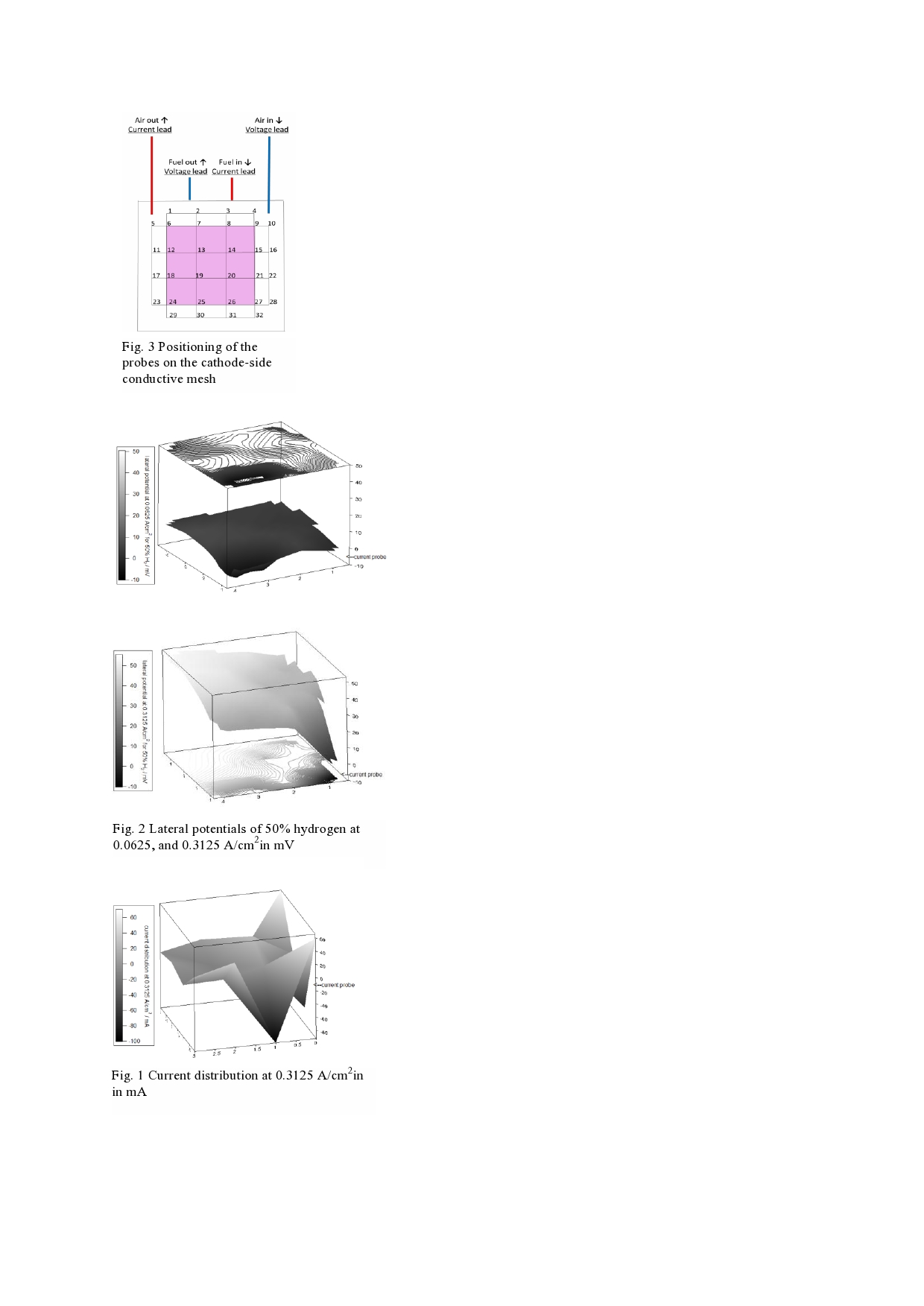