Hall 2 (Scottish Exhibition and Conference Centre)
R. Kikuchi, D. Minori, A. Takagaki, T. Sugawara, and S. T. Oyama (The University of Tokyo)
Direct internal reforming SOFCs (DIR-SOFCs), which directly utilize hydrocarbons as fuels in the anode, can achieve high power generation efficiency due to chemical recuperation of the anodic reaction heat by endothermic reforming reactions. DIR-SOFCs often suffer from carbon deposition on the anode and the resultant severe degradation of power generation performance and stability [1]. Nickel contained in SOFC anodes as an electronic conductor acts as catalytic sites for carbon decomposition in the first step of hydrocarbon fuel conversion. Accordingly, these Ni-related issues can be lessened by reducing the Ni content in the anode. In this study titanate-based Ni-cermet anodes such as Ni-LaxSr1-xTiO3+d (LST) have been investigated as an alternative anode to conventional Ni-YSZ cermets. LST is a mixed ionic and electronic conducting material with a relatively high electronic conductivity of the order of 10 S/cm2[2]. Ni-LST anodes were fabricated by a conventional method using a ball mill and by an impregnation method, and the stability as well as tolerance to carbon deposition of the anodes were evaluated.

Titanate-based perovskites ware prepared via Pechini method. A desired amount of the respective nitrates and acetates were mixed with titanium isopropoxide and citric acid, and then dissolved in ethylene glycol. The mixture was heated to 150ºC on a hot stirrer to complete the polymerization of the mixture. The resultant powder was calcined in air at 800ºC for 3 h to form a perovskite oxide. The obtained powders were mixed with NiO particles at a desired ratio, and ball-milled for 24 h, followed by calcination at 1200°C for 5 h in air. The thus prepared cermets were pulverized into powder, and then mixed with polyethylene glycol to form slurry, with which an YSZ disk of 20 mm in diameter and 0.5 mm in thickness was painted in a circular shape of 6 mmφ as an anode using a screen. Then the disk was calcined at a desired temperature for 5 h in air. In addition, Ni cermets were prepared by an impregnation method. LST powders prepared by the Pechini method were impregnated with an aqueous solution of nickel nitrate on a steam bath at 80°C, dried, and then calcined at 1000 ºC in air for 2 h. Thus obtained Ni-LST powder was used to prepare the anode in the same manner as conventional cermets. Current-voltage characteristics of the anode was evaluated at 1000 ºC by feeding humidified H2 and dry O2 to anode and cathode, respectively, at 100 ml/min. Direct internal reforming power generation performance was measured by feeding steam-to-carbon ratio of 0.1 under constant current load of 200 mA/cm2. The durability of the cells was evaluated by AC impedance spectra measured under open circuit condition at 1000 ºC with a Princeton VersaSTAT3 in humidified H2 feed before and after the power generation at S/C = 0.1. 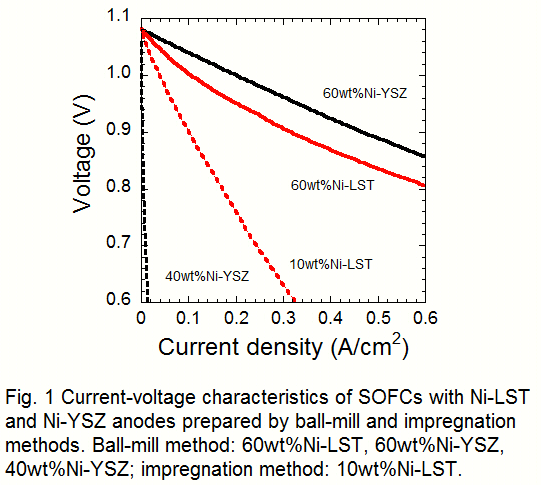