Hall 2 (Scottish Exhibition and Conference Centre)
L. Bardini, A. Pappacena, M. Boaro, and A. Trovarelli (Universitŕ degli Studi di Udine)
An approach to favor the penetration of solid oxide fuel cell (SOFC) technology into the market is the reduction of the operating temperature of cells and extending their use with renewable fuels. In this regard ceria-based materials have been shown to be valid components for SOFC anodes and electrolytes, allowing operation at intermediate temperatures (IT-SOFC) and being a good catalyst of oxidation[1]. However, in order to make ceria-based fuel cells competitive with respect to their counterparts operating at high temperature, the conductivity and catalytic properties of ceria must be improved. One successful approach is to add a metal co-catalyst in the anode. Tin has not yet been investigated for this purpose, despite evidence of its having a strong interaction with ceria, which has a positive impact on ceria’s oxygen storage capacity and catalytic properties [2,3]. We investigated for the first time the effect of tin on the catalytic properties of ceria towards the oxidation of hydrogen in intermediate temperature solid oxide fuel cells (IT-SOFC). Ceria and tin oxides were infiltrated in a porous Ce0.8Sm0.2O2-d (SDC) scaffold (150 μm) and tested in button cell configuration. The cell was electrolyte supported and the electrolyte (380 μm) used was a commercial SDC powder. LSCF/GCD cathode (20 μm) was applied by painting with vulcan carbon as the pore former.

It was found that when tin oxide is present alone it is reduced to metal which, being in liquid form due to the relatively high temperature, segregates to the surface of the anode. This in turn negatively affects performance by causing a significant increase in polarization resistance. When cerium and tin are both present in SDC anodic scaffolds, on the other hand, a 10-fold increase in power output when compared to ceria alone, with a concomitant decrease in cell polarization resistance (Figure 1). The performance was found to be stable over a period of 20 hours at 600°C with the open circuit voltage (OCV) remaining at 0.92V, 400mV higher than the OCV developed by a cell infiltrated with ceria alone. Tests were performed up to 700°C without registering significant degradation for the ceria/tin anodes.

X-ray diffraction experiments in a hot chamber were made to confirm that even in the presence of ceria tin is present in operating conditions as a molten metal while no evidence of the presence of solid solutions was found; SEM/EDX analysis shows that tin localizes preferentially on the ceria particles. This is in stark contrast with the behavior of tin when alone in the anodic scaffold, in which case EDX spectra reveal that the metal is more uniformly spread inside the anode, and rapidly segragates to the surface. This highlights the stabilization of molten metallic tin in the presence of ceria and suggests the existance of a synergystic relationship between ceria and tin which includes an increased oxygen exchange rate for ceria, which leads to increased cell performance, and a stabilization of tin as a molten metal on ceria nanoparticles. Ex situ characterizations of the tin/Ceria-SDC composites are in progress to understand the nature of this interaction and to evaluate the use of Tin/Ceria based materials with alternative fuels. 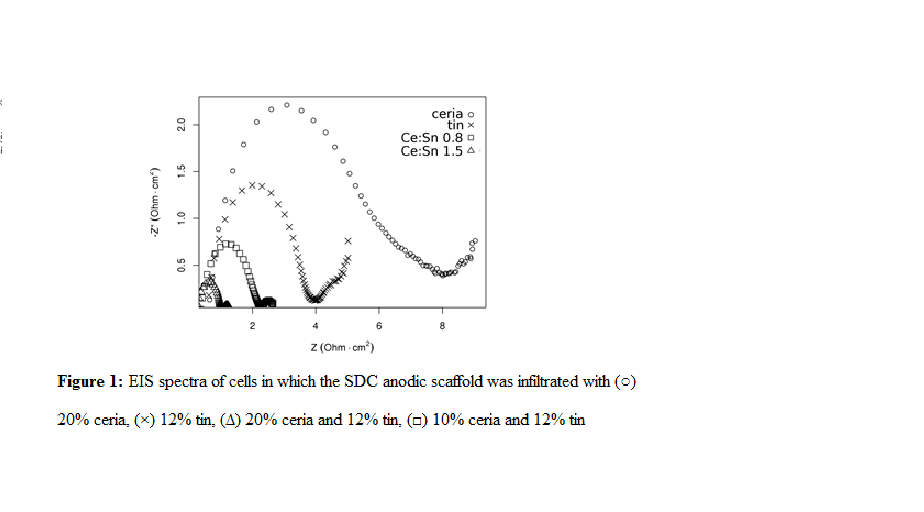