Platinum-based catalyst, the stat- of- the-art in oxygen reduction catalysis in PEMFC is also one major factor, impeding the commercialization of this energy conversion technology. This is mostly due to high Pt cost and insufficient durability during prolong FC operation time. Recently, there is a growing interest in Pt free oxygen reduction reaction (ORR) catalysis for acidic fuel cells.  Ruthenium chalcogenide catalysts have been reported to present highly stability and fair activity in acid environment [1,2].

In this study, ruthenium selenide, phosphide and ternary RuCoSe were synthesized using various methods, following by a rigorous study of their activity, as oxygen reduction catalysts in acid solutions.

The synthesis of selenide-based nano size particles was carried out in a rather straightforward manner, using microwave assisted polyol and sodium borohydride reduction method and inorganic RuCl3, CoCl3 and Se or H2SeO3. However, the preparation of RuP and Ru2P has been found to be much more challenging. These methods include reaction at high temperature in closed vessel under autogenic pressure.

ORR study on ruthenium-based catalysts in 0.5M sulfuric acid solution was studied using rotating disk ring electrode RRDE method coupled by surface and bulk and Raman, XPS and EDS and XRD spectroscopic methods coupled with SEM and TEM microscopy. We have found that there are more than single active sights. The number of these sights is controlled by the bulk and surface composition as well as surface oxides formed on the particles at high potentials. Interestingly, most of the O2 reduction proceed directly to water via 4e- reduction process.  Calculated rate consents suggest that reduction by 2e to H2O2plays a major role at high potential, whereas at low potentials the reaction proceed by direct reduction of 4e-.

Extremely high selectivity in the presence of methanol was measured (methanol tolerance) was found in Ru2Se (figure 1).

Figure 1. Oxygen reduction on Ru2Se and Pt in the presence of methanol (electrode polarized to 0.4 V) 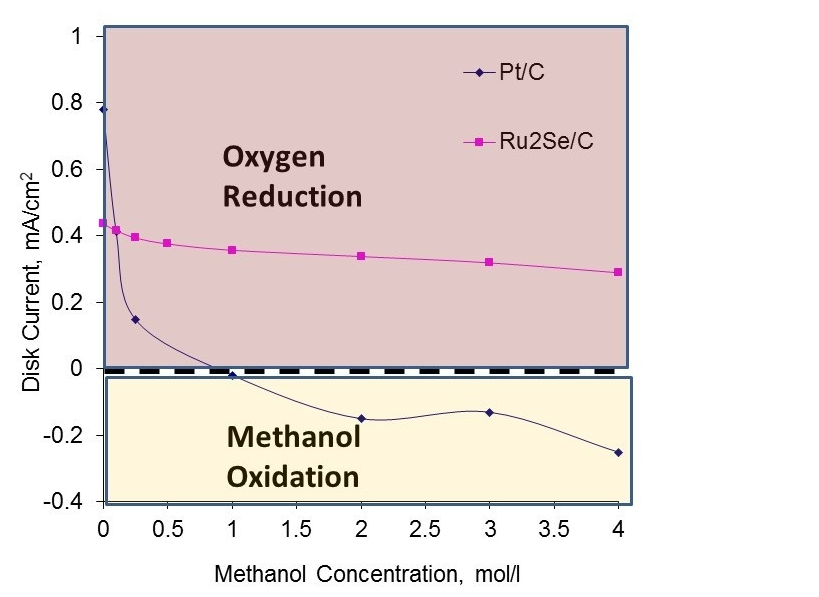