Alsh (Scottish Exhibition and Conference Centre)
G. Corre and A. Brisse (European Institute for Energy Research (EIFER))
Hydrogen production through water electrolysis is one of the key processes required in the conversion of electricity to fuels. Carbon free hydrogen produced through water electrolysis can be used as a fuel for hydrogen powered applications (such as fuel cell cars) or grid injection, or as a reactant in downstream processes to produce synthetic fuels such as SNG or methanol. Among available technologies, high temperature electrolysis potentially offers significantly higher electrical to chemical conversion efficiencies compared to alkaline and PEM electrolysers, with values in excess of 100% achievable if additional thermal energy is supplied to the system. High temperature electrolysers are essentially solid oxide fuel cells operated in reverse. Hence, the development of solid oxide electrolysers (SOE) has hugely benefited from the intensive research carried out for the development of Solid Oxide Fuel Cells (SOFCs) in the past decades.  A 25 cells stack manufactured by Topsoe Fuel Cells has been tested at EIFER in high temperature electrolysis mode at about 750°C and current densities of 0.57 and 0.72 A/cm2. The applied steam conversion rate was 50%, with a 90 % absolute humidity gas feed.

The total duration of the test was almost 9100 hours, split between 8300 current hours and 800 standby hours induced by incidents that occurred during the test. Incidents included losses of the steam and current supplies. After each incident, the stack performance was recovered, indicating a good robustness of the stack towards unexpected and potentially damaging conditions.  The main issue during the test has been the considerable increase of the voltage drop between the positive end plate and the bottom stack repeat unit (SRU), before a sharp improvement occurred after about 2000 hours of operation, which has influenced the stack temperature distribution and in turn individual SRU degradation. The maximum observed voltage drop culminated at 2.73 V, before stabilising around 0.6V. 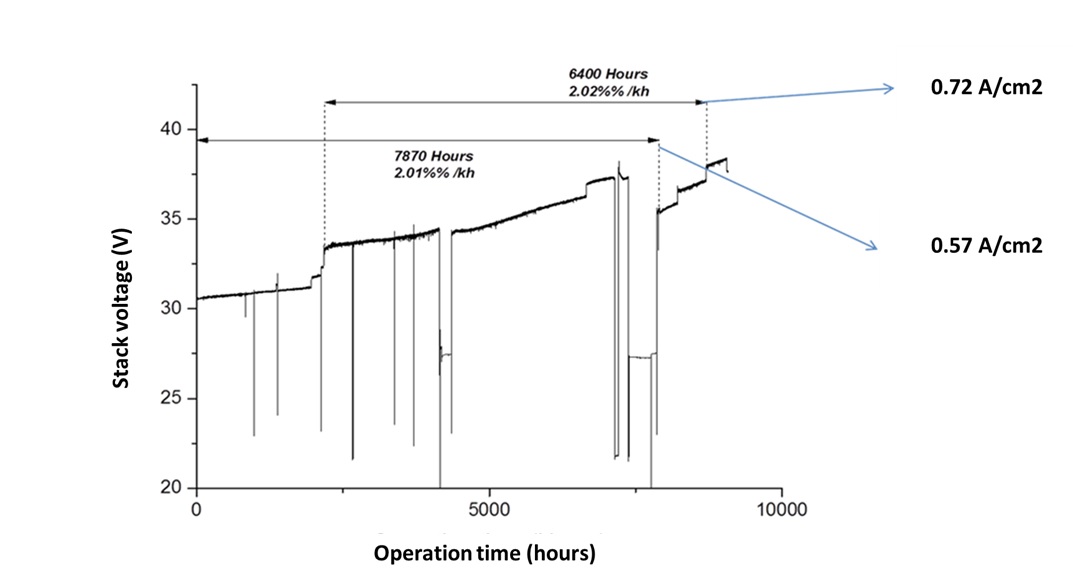