Lomond Auditorium (Scottish Exhibition and Conference Centre)
F. Greco, A. Nakajo (Ecole Polytechnique Fédérale de Lausanne), Z. Wuillemin (HTceramix SA), and J. Van herle (Ecole Polytechnique Fédérale de Lausanne)
Thermo-mechanical issues in planar solid oxide fuel cells (SOFC) must be understood and overcome to meet the reliability standards for market implementation. This study presents a modelling framework constituted by a thermo-mechanical and electrochemical model of a SOFC stack. Rate-independent plasticity and creep of the component materials have been considered. Modified periodic boundary conditions have been implemented to simulate the behaviour of a single repeating unit (SRU) in a stack.

The analysis starts with the simulation of stack conditioning procedures, which aims at capturing the stress build-up/relaxation throughout the several steps in the stack components production and assembly.

The simulated stresses after the initialisation sequence provide the initial stress state for the simulation of stack operation, which consists in importing into Abaqus software the temperature profiles from thermo-electrochemical simulations. The study includes long-term steady-state operation in both co-flow and counter-flow configuration, interrupted by thermal cycling. The temperature profiles implemented in the long-term operation cases correspond to operation under internal steam-methane reforming.

No critical stresses were found in the sealant joining the cell to the SRU. In contrast, the stresses in the manifold sealants were found to be relevantly high. Similarly to the evolution of contact pressure, long-term operation increases the risks of sealant failure during thermal cycling.

Figure 1: On the top side, temperature field in co-flow configuration plotted on the deformed shape of a short stack (deformation along the z-axis magnified by 300:1), state: “Start Operation”. On the bottom side, contact pressure at the interface anode/GDL fuel along the symmetry line of the SRU. Lines 3b, 4 and 5 are referred to the case of long-term operation in co-flow configuration. 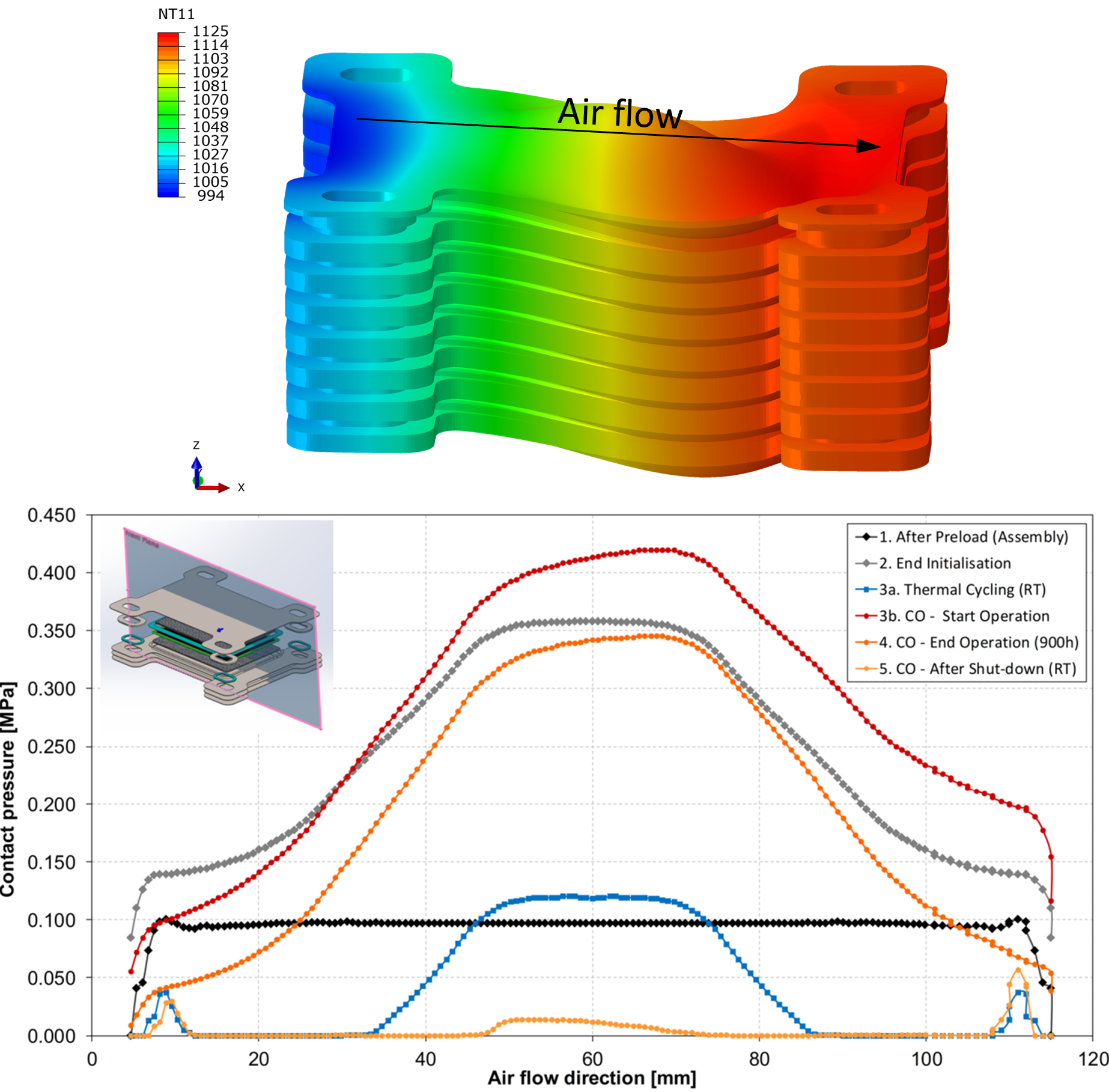