Hall 2 (Scottish Exhibition and Conference Centre)
B. R. Sudireddy, J. Nielsen, K. T. S. Thydén, A. H. Persson, and K. Brodersen (DTU Energy, Technical University of Denmark)
Even though solid oxide fuel cells (SOFCs) have a high potential with respect to efficiency and fuel flexibility they are not yet competitive in terms of cost and durability with conventional chemical energy conversion technologies. The potential cost reduction can be achieved through the development of metal supported SOFCs (MS-SOFCs) by using the cheaper support materials such as stainless steel. Furthermore, MS-SOFCs  offer some  advantages compared to conventional electrode and electrolyte supported SOFCs such as higher thermal conductivity, ductility in support, which are advantageous in tolerating the vibrations, transient loads, thermal and redox cycling [1-2].

The DTU MS-SOFC design based on ferritic stainless steel requires incorporation of electrocatalyst into the anode functional layer by infiltration methods [3]. Previously, the preferred electrocatalyst has been gadolinium doped ceria (GDC) with small amounts of Ni, which in the following is referred to as Ni:GDC. Recently, studies on Nb-doped SrTiO3 anode based all ceramic electrolyte supported SOFCs have shown that Ru:GDC electrocatalyst is relatively superior in terms of performance and durability than Ni:GDC [4].

In the present study, MS-SOFCs infiltrated with Ru:GDC electrocatalyst are investigated. The Ru:GDC precursor solution was infiltrated into the anode backbone and heat treated in air at different temperatures to remove the organic materials while preventing the corrosion of the metal particles. The morphology and microstructure of the infiltrated electrocatalyst layer was characterized using high-resolution electron microscopy. The electrochemical characterization involved polarization curves and electrochemical impedance spectroscopy (EIS) in the temperature range of 650-750ºC. The polarization curve for Ru:GDC infiltrated MS-SOFC on single cell level (active area 16 cm2) is presented in Fig. 1. The fuel utilization corrected polarization resistance, Rp, of 0.322Ωcm2 was measured at 650ºC in 20%H2O/H2. This is the lowest Rp reported for any MS-SOFC design to the knowledge of the authors. The durability was lower than expected and this could be due to the loss of percolation of the electrocatalyst. The relatively dense microstructure of the anode functional layer might have resulted in very thin electrocatalyst layer that could become non-percolating layer over the time at the operating temperature. 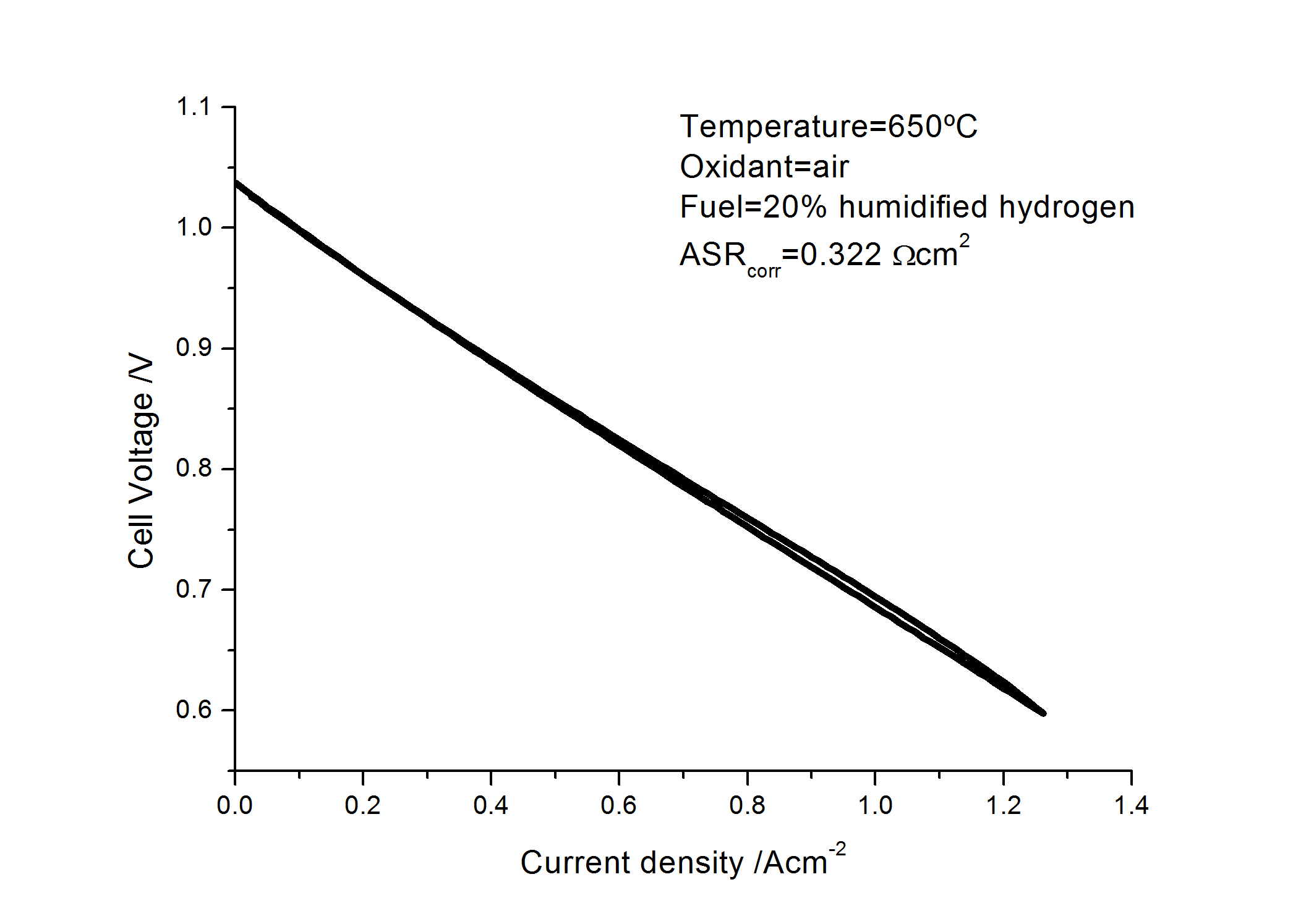