Dochart (Scottish Exhibition and Conference Centre)
N. Muthuswamy, M. E. M. Buan, D. Chen, and M. Rřnning (Norwegian University of Science and Technology)
Recently, nitrogen doped carbon nanofibers (N-CNFs) prepared in the presence of Fe have shown promising activity for the oxygen reduction reaction (ORR). However, the turn over frequency (TOF) at a given potential is low compared to traditional Pt/C catalysts1. This could be due to lower active site density and poor accessibility of the active sites to oxygen molecules. Therefore, it is necessary to understand the nature of the active sites present in the N-CNFs in order to increase their active site density. It has been proposed that the presence of pyridinic nitrogen may be playing an important role for the ORR activity compared to other nitrogen groups such as quaternary, pyrrolic and pyridinic oxide2. In this work, a chemical vapor deposition method has been employed to selectively tailor the N-type groups present in the surface of the N-CNFs. Characterization of the elemental composition and N-groups present in the surface of the N-CNFs was done by XPS analysis and correlated with the ORR activity.

The synthesis was carried out in a tubular quartz reactor by decomposing CO and NH3 over Fe catalyst supported on exfoliated graphite. The synthesis temperature was varied from 550⁰C to 750⁰C while keeping all other synthesis parameters constant. The activities for the ORR were examined by performing linear sweep voltammetry in 0.5M H2SO4. The H2O2 formation during the ORR was analyzed using a RRDE.

The synthesis performed at the lowest temperature showed no growth of N-CNFs, but by increasing the synthesis temperature the N-CNF yields increased. However, the N-content in the surface of the N-CNFs decreased with increasing the synthesis temperature, where only 1.4at% was obtained for N-CNFs obtained at 750⁰C compared to 3.4at% at 600⁰C. It could therefore seem that higher temperature was not favorable for the incorporation of nitrogen in the carbon matrix. Furthermore, the N-CNFs obtained at 750⁰C contained more quaternary nitrogen, while synthesis at lower temperatures favored the presence of pyridinic nitrogen groups as shown in Figure 1. This could be related to the microstructure of the N-CNFs since CVD synthesis is expected to yield more platelet CNFs at lower temperatures, thus exposing more edges and increasing the amount of pyridinic nitrogen. The most active ORR catalyst in acidic medium was the one obtained at 650⁰C with high current density of 2.9 mA/cm2 at 0.7 V vs. RHE. Further investigations using HR-TEM and by applying post treatment methods on prepared N-CNFs will be employed to explore the active sites and textural properties of N-CNFs further. 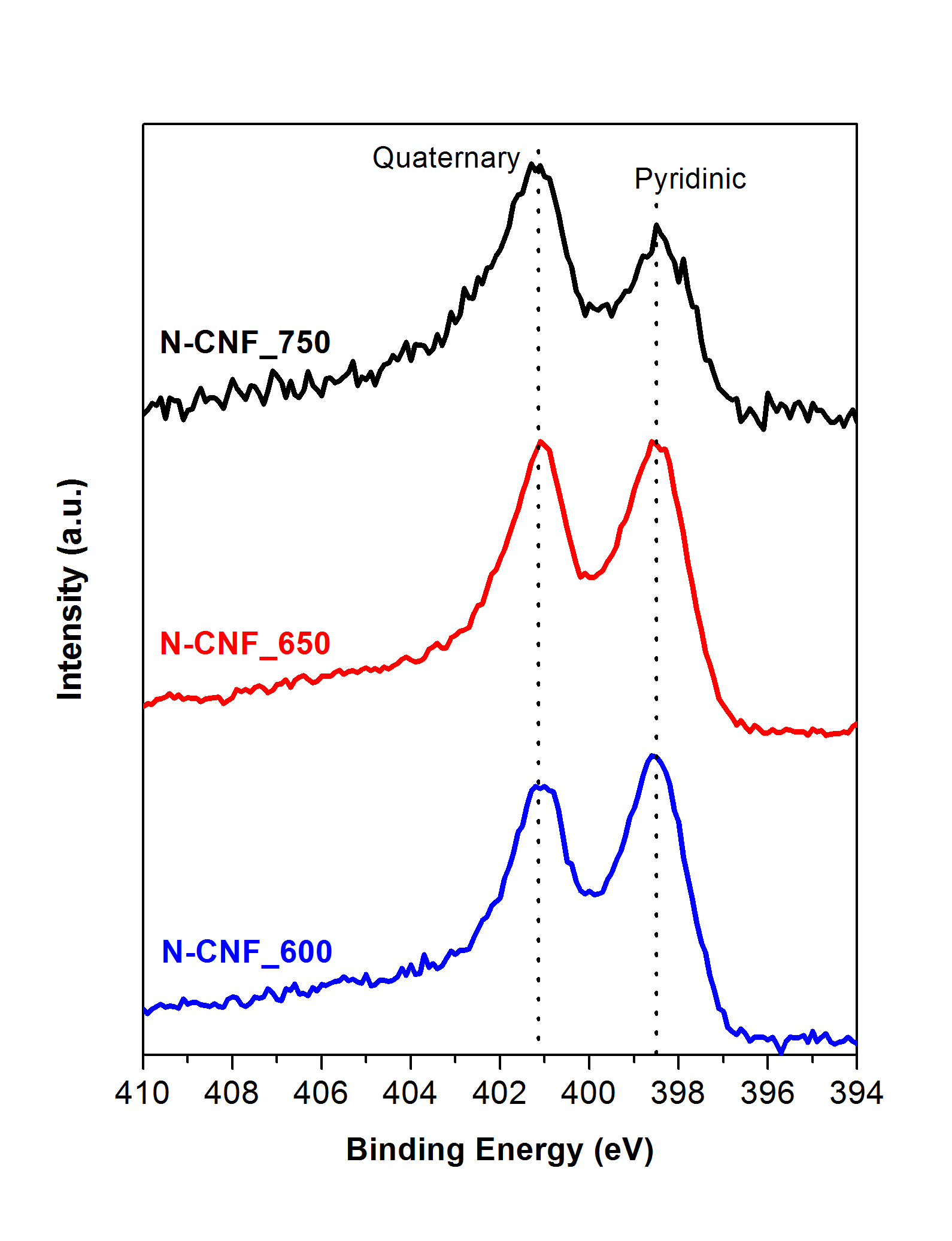