Single cell performance of solid oxide fuel cell (SOFC) is largely limited by oxygen reduction reaction (ORR) at cathode, 1/2O2 + VO¨ + 2e’ → OO×.  Therefore, understanding the mechanism of ORR is fundamental issue in improving SOFC performance. The above reaction equation tells us that higher chemical potential of electron is advantageous to the ORR kinetics, which implies that catalytic activity is significantly influenced by electronic band structure of cathode material. The authors also point out that the electronic structure is related to the basicity (a(O2-)) determined by the reaction, 1/2O2 + 2e’ → O2-, which also has an impact on the cathode activity. Though the discussion based on electronic structure has been initiated, the comprehensive understanding on the relationship between ORR activity, electronic structure and basicity has not been achieved.

To better understand the ORR mechanism, PrOx-based cathode is employed as a model system, which is a simple material and sensitive to doping and surface modification.  In order to examine the influence of density of surface-adsorbed oxygen, the authors also investigate the PrOx-based cathode surface-modified with BaPrOx (BPO), which includes a strong basic element, Ba. The cathode reaction properties of those cathodes are evaluated and the ORR mechanism will be discussed.

PrOx thin film electrodes have been prepared by an RF-sputtering technique in an oxygen-including atmosphere on both sides of the substrates (electrolyte) of single-crystal yttria-stabilized zirconia (YSZ). For surface modification with BaPrOx (BPO), a thin layer is deposited on the PrOx thin film by RF-sputtering under the same condition. A reference electrode is fabricated by painting Pt paste and firing at 1273K before the above thin film fabrication. The performance of these thin film electrodes has been evaluated in terms of interfacial conductivity by three-terminal AC impedance measurement under controlled temperature and oxygen partial pressure (Po2). The samples are analyzed by the X-ray diffractometry (XRD), Raman spectroscopy and X-ray photoemission spectroscopy (XPS).

The Nyquist plot typically shows, in addition to a contribution of the electrolyte resistance at highest frequency, a small semi-circle at intermediate frequency and a large one at the lowest frequency.  The latter can be ascribed to the surface reaction, and the resistance is normalized as area-specific conductivity (σLF) to serve for a measure of cathode reaction activity.In the Po2 dependence of σLF at 700˚C, all of the examined electrodes, with two different thickness (90 and 270nm) and a BPO modification, show a 1/2 power dependence.  In addition, this behavior is perfectly the same as that of (La,Sr)CoO3-based cathodes [1].  Although the bulk properties such as defect structure and electrical transport are totally different among those oxides, the universally observed Po2 dependence suggests that the rate-determining step is the following reaction, O2(ad)2- + VO●●→OOx + O(ad)- [2].

Figure 1 shows the temperature dependence of σLF at Po2=1 atm.  It is noted that the activation energy indicated is averaged value for the temperature above 550˚C.  The PrOx electrodes with 90nm- and 270nm-thickness show different magnitude and activation energy in σLF, suggesting that especially at lower temperatures, these may have different rate determining steps. For the 270nm-thick and 270nm+BPO electrodes, a discontinuous drop of σLF are observed between 500-550˚C, which can be related to the phase transition of PrOx from β-phase (Pr6O11) to α-phase (PrOx).  The 270nm+BPO electrode shows higher σLF than the single-layer PrOx electrodes. This implies that the ORR activity of the BPO-modified electrode is improved by enhancement of surface basicity and resultant increase in the density of surface-adsorbed peroxide ion. 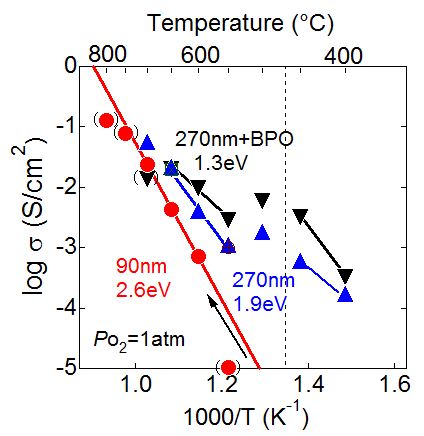