Dochart (Scottish Exhibition and Conference Centre)
J. Hartvigsen, J. Smith, and F. Dogan (Missouri University of Science and Technology)
The a novel electrolysis technology was developed by Advanced Hydrogen Products is a patented method of maintaining separation of product gases (hydrogen and oxygen) by using fluid flow through porous electrodes rather than a gas impermeable membrane. This eliminates the need for any type of membrane. Eliminating the need for a membrane in alkaline electrolysis allows the device to operate at temperatures above 120 °C, where most ion conducting membranes would degrade and fail. Operating at higher temperatures reduces the anode and cathode overpotentials substantially. The reduction in overpotentials allows non-platinum group metals to be used, while increasing the electrical efficiency at comparable current densities. In addition, the device is operated at high pressure for electrochemical compression of the product gas.

The method by which separation occurs is by flow of the alkaline electrolyte solution through the porous cathode and anode electrodes where hydrogen and oxygen gases are generated.  The product gases are then separated from the electrolyte that is re-circulated back into the electrolyzer stack.

The new method has advantages over traditional methods.  By not having a membrane it is able to operate at a much higher temperature than current membrane separators allow. Not having a membrane is also beneficial since the membranes are costly and more prone to failure than other parts.

The new electrolyzer method also reduces the Ohmic losses due to bubbles. Note that additionally, the electrolyte conductivity is also increased by not having a membrane. The pure electrolyte has a conductivity of at least 3 times greater than most immobilized electrolytes.

The initial tests at low temperatures have been shown that gas crossover was low enough that the oxygen product side failed to ignite when given an ignition source and that hydrogen was produced due to ignition of the hydrogen product side. Based on the increase in exchange current density, resulting from the increased temperature, the hydrogen production method should achieve a current density of 1A/cm2 at 1.5V and 2A/cm2 at 1. 75 V[1]. A high temperature bipolar plate model is currently being built.

The current state of the art in electrolysis is limited by the catalysts and operating temperature of the membrane. Alkaline electrolysis has a long history, and as such is generally the most cost effective of electrolysis methods. Although it has lower current density, it has much lower material costs, making it the most effective choice in water electrolysis. In the area of renewable energy integration and grid-stabilization, low capital cost is very important for cost effective hydrogen production. Most current separation membranes are unable to operate above 100 °C. Investigation into higher temperature membranes has been the subject of research since the 1970’s (Fig. 2). As of yet, no membrane has been developed that is cost effective above 100 °C. This results in choice between using a larger amount of lower cost materials such as nickel, or a smaller amount of higher cost materials such as platinum. By eliminating the membrane, the operating temperature can be increased and dramatically improve the efficiency of the system. An increase in the operating temperature from 80 °C to 240 °C results in the exchange current density of nickel that is comparable to platinum. Significant savings will result from efficiently producing high current-densities utilizing non-precious metals. 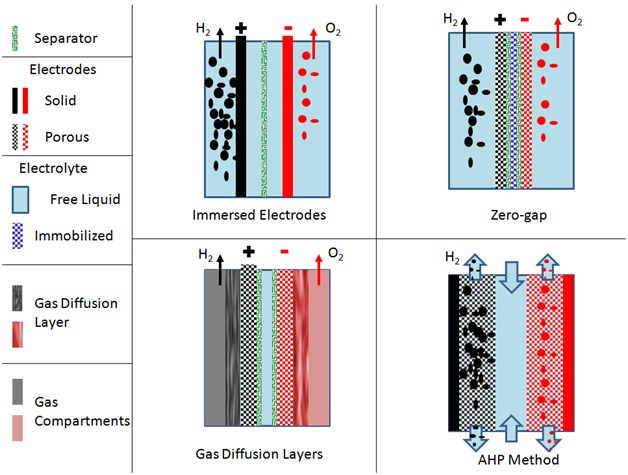