Grand Ballroom West (The Diplomat Beach Resort)
I. Diaz-Aburto, M. Colet-Lagrille, A. Akbari-Fakhrabadi, and F. Gracia (Universidad de Chile)
The electrochemical oxidation of carbonaceous fuels in solid oxide fuel cells (SOFCs) appears as a promising alternative for energy generation, considering the high chemical to electrical energy conversion efficiencies of these systems [1]. However, carbonaceous fuels usually contain a significant amount of sulfur, which can poison SOFCs anode materials such as nickel-yttria stabilized zirconia (Ni-YSZ) composites [2,3], which in addition suffers from carbon deposition [2,4]. For this reason, it is necessary to develop alternative materials to be used in carbon-air fuel cells (CAFCs) applications.

In this respect, ceria (CeO2) appears as a material of interest for fabrication of CAFCs anodes due to its catalytic activity in the oxidation of carbonaceous fuels and its good tolerance to sulfur poisoning [5]. However, ceria-based materials present low electronic conductivity for SOFCs applications, thus it needs to be improved by doping ceria with other metal oxides, such as molybdenum trioxide (MoO3) which shows similar catalytic and stability properties than ceria [6-9].

Recently, ball milling followed by solid-state reaction processes has been reported in the literature as a method for the synthesis of Mo-doped ceria (CMO) nanoparticles (Ce0.9Mo0.1O2+δ) for SOFCs applications [10]. However, this method is associated with contamination of the products and low synthesis rates. Therefore, this research project proposes the combustion method as an alternative to produce these CMO nanoparticles.

As-prepared powders and calcined powders (700 °C / 2 hours in air) were characterized by XRD, TEM, UV-visible spectrophotometry, EDS, XPS and TGA. Figure 1a shows the XRD pattern of as-prepared and calcined powders. These results together with TEM analysis (Figures 1b and 1c) show that CMO nanoparticles crystallize in the fluorite-type structure, similarly to its CeO2 parent, and have an average size of 14 nm. It was not detected MoO3 signals or any secondary phase in these XRD patterns. To determine the effect of molybdenum as a dopant, the lattice parameter was calculated using Rietveld refinement and compared with that for pure ceria. The results obtained (see Table 1) show that the lattice parameter of the CMO nanoparticles synthesized present a different lattice parameter from pure ceria, which evidences the presence of a dopant in the matrix of ceria. UV-visible spectrophotometry analysis (Figure 2a) confirm this result by showing a shift of the absorbance spectra towards higher wavelength values which can be related to a change in the electronic structure of ceria. The presence of molybdenum in the CMO nanoparticles was evidenced as well by EDS and XPS analysis (Figure 2b and Figure 2c), the last of which showed a Mo 3d double peak which indicates the presence of Mo6+. Finally, the thermal stability of the synthesized material was confirmed by TGA under a nitrogen atmosphere at 950 °C (Figure 3).

Currently, dense pellets made from CMO nanoparticles are being produced by pressing and calcination for mechanical strength (elasticity modulus, micro-hardness and fracture toughness) and electrical-ionic conductivity (electrochemical impedance spectroscopy) tests. The density of the pellets obtained was 6.954 g cm-3, which is similar to the value reported in [10].

The authors thank the Chilean Government for a CONICYT studentship for IDA. 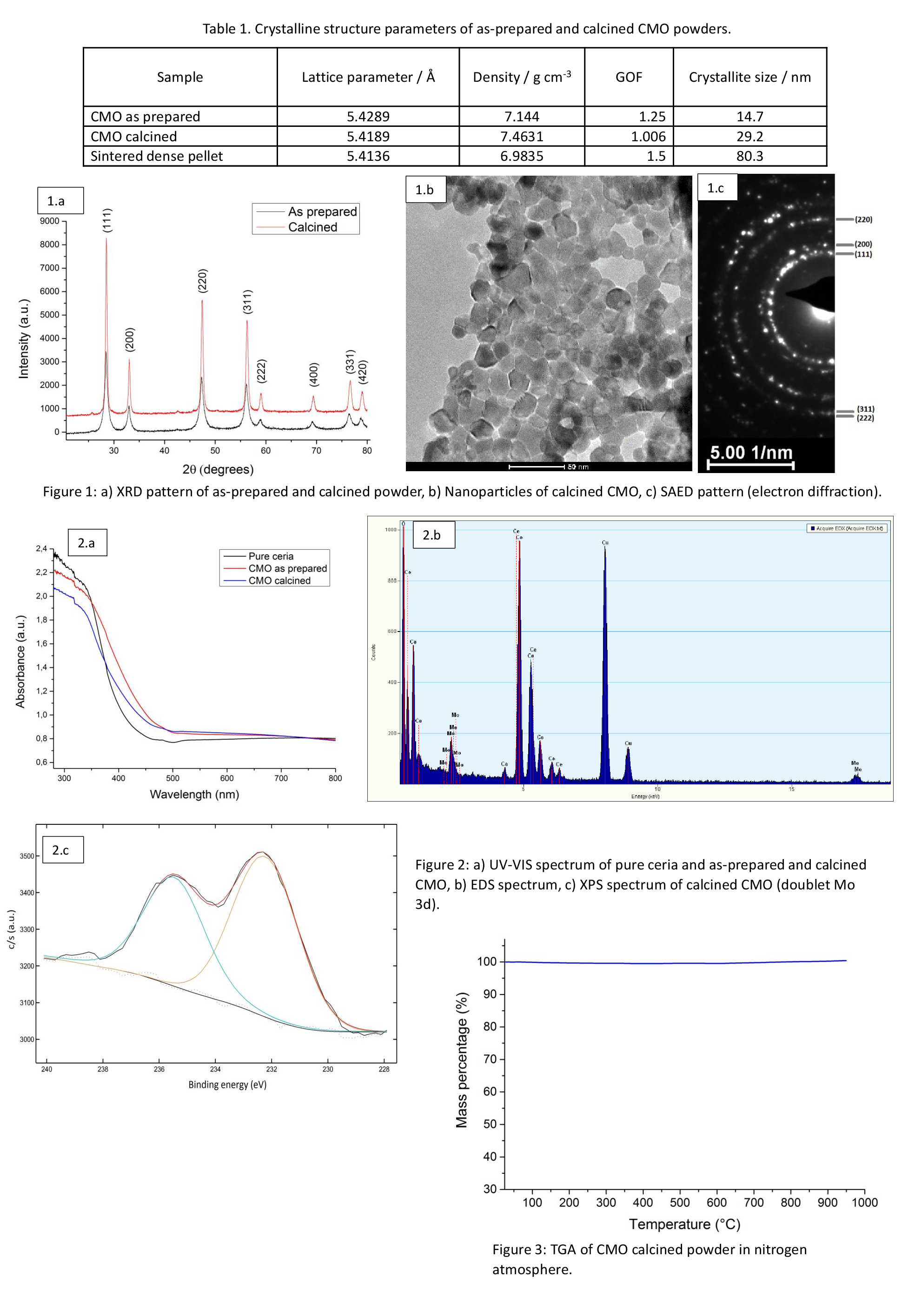