SDC powder was prepared by co-precipitation method, and then it was mixed with NiO at a volumetric ratio of Ni-metal:SDC = 60:40, followed by calcination at 1300°C for 5 h in air. The obtained cermet was screen-printed with polyethylene glycol on YSZ disk (20 mm in diameter, 0.5 mm in thickness), and then calcined in air to form porous Ni-SDC electrode. CaO-modified Ni-SDC anode was fabricated by infiltrating Ca(NO3)2 solution on the Ni-SDC anode, followed by calcination at 1200°C for 2 h in air. Power generation performance of the cells was evaluated by current-voltage characteristics at 1000, 900, 800, 700°C with VersaSTAT3 (Ametek Inc.), feeding 0.3% humidified H2 or the mixture of CH4 and CO2 on anode side and pure O2 on cathode side. In addition, stability tests on direct dry reforming operation were conducted under a constant current load. Also, alternative current impedance spectroscopy in humidified H2 flow was conducted under open circuit condition before and after the power generation tests to evaluate the durability of the cells.

Figure 1 shows I-V characteristics of the cells with Ni-SDC, CaO-modified Ni-SDC and Ni-YSZ anode, in hydrogen operation and direct dry reforming operation at 1000°C. Ni-SDC based anodes showed higher performance than conventional Ni-YSZ, with both hydrogen and dry reforming fuel. CaO-modified Ni-SDC showed slightly lower performance than pristine Ni-SDC possibly because CaO is an insulator and may have lowered the conductivity of the anode. In Figure 1(b), Ni-YSZ displayed lower open circuit voltage and steep I-V curve, which indicates catalytic activity of Ni-YSZ was insufficient to promote dry reforming and thus leading to low H2 partial pressure and high O2 partial pressure in the anode. On the other hand, for Ni-SDC based anodes, the open circuit voltage was higher and the slope of I-V curve was as small as that with hydrogen fuel. For Ni-SDC and CaO-modified Ni-SDC anodes, overvoltages were separated into ohmic resistance, electrode reaction overvoltage and gas diffusion overvoltage from AC impedance spectra. Although CaO-modified anode showed almost no difference before and after power generation test, pristine Ni-SDC anode, on the other hand, showed larger ohmic resistance and gas diffusion overvoltage after power generation, which probably due to carbon deposition on anode. 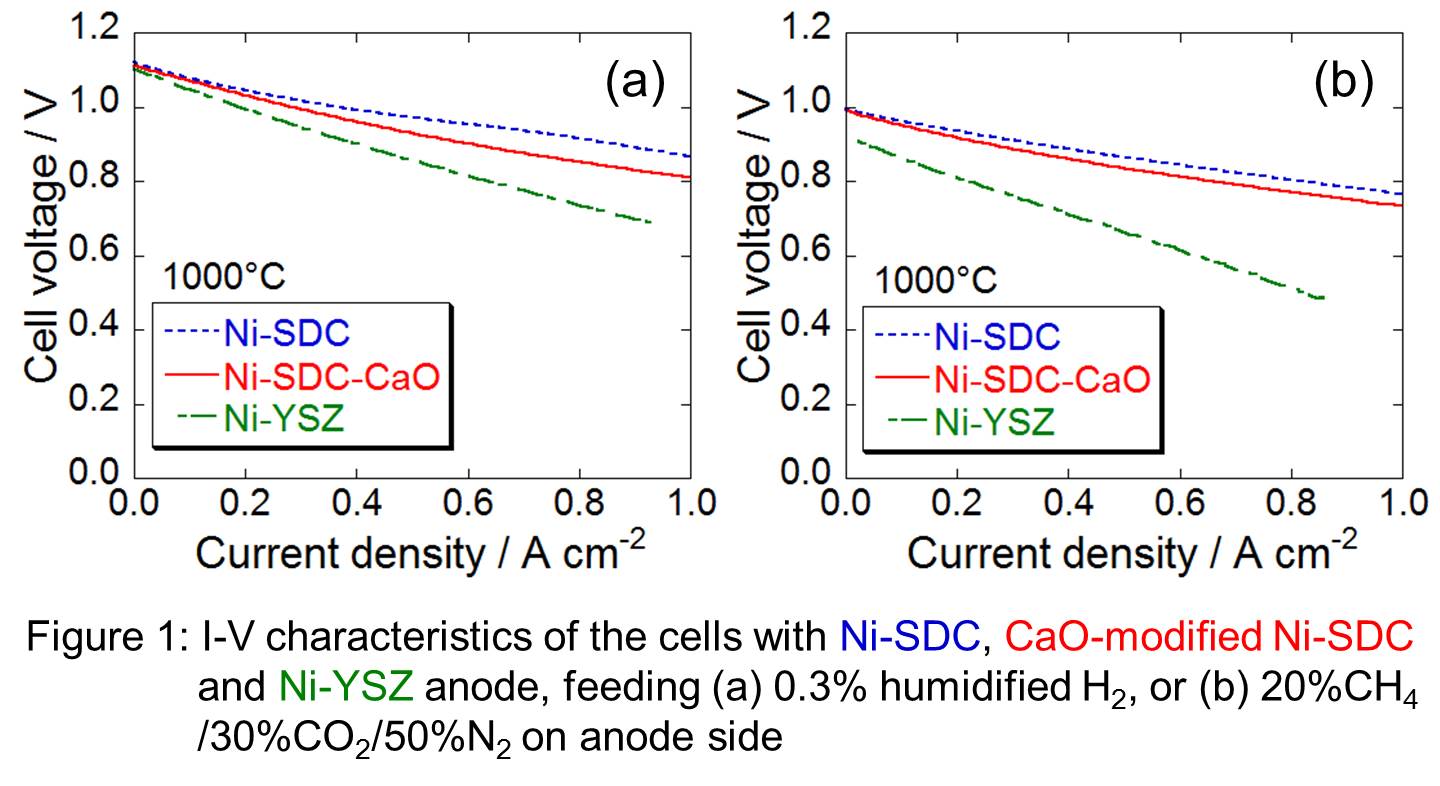