In order to establish environmentally friendly small-scale CHP units in the range of 5 to 50 kW, a concept with serial connection of two SOFC stacks and an electrical efficiency of up to 50 % was developed. The idea behind STAGE-SOFC is to couple an exothermal CPOX stage with one or multiple endothermic steam reforming stages and thus, combining the benefits of a simple, robust CPOX layout with high efficiencies achievable using a steam reforming process. This concept allows to save error-prone, maintenance-intensive water supplies or costly equipment for anode off-gas recirculation and to ensure a simple and compact design. The STAGE-SOFC system is set up for natural gas operation and requires one CPOX reformer and one steam reformer for fuel processing as well as an after burner for post-combustion of anode-off gas. In addition, a staged cathode air supply facilitates individual stack temperature control and savings in costly heat exchanger area.

Building a working SOFC-system based on a completely new system layout requires a lot of detailed simulations. For a robust system layout, the most important simulations are not performed in the vicinity of the nominal operating point, since limiting factors for system operation come to light in extreme conditions. To push the performance of the system to its limits, the selection of the nominal operating point must be optimal. A simulation method based on classical design experiment methods was developed in this project, allowing massive multidimensional parameter scans to find out the optimal operation points.

For verification of the basic layout and system operability a thermally self-sustained and completely integrated 5 kW prototype system was developed. The testing of the prototype was focused on the variation of parameters like electrical load, CPOX air ratio, O/C ratio, fuel utilization and their influence on the system performance. The prototype system was operated for more than 600 hours under various parameters and stable loads from 1.5 to 5.3 kW(AC). It was possible to achieve an electrical efficiency of 50 % in part load and 45 % at 5 kW power output. Significant experience for improvement of main components and system controllability was gained during the testing.

After detailed evaluation of the testing data a new hotbox layout with improved components for better thermal and functional integration was developed. The new design was kept as simple as possible to reduce the manufacturing costs. Flow-sheet simulations and testing of the first prototype revealed that the extent of methane reforming is not high enough with an adiabatic reformer. To drive methane conversion further, a compact heated reformer unit it was developed using a simple plate-type heat exchanger with a precious metal catalyst coating on the plate surface to reform natural gas with anode-off gas. Experimental investigations of the reformer performance were carried out in a test bench with model gas feeds for 150 h. The reformer testing conditions were based on operating results of the first prototype system.

Furthermore, a new integrated burner concept for both, non-premixed anode-off gas combustion and premixed natural gas combustion in one combined burner unit was developed. Combustion experiments are often challenging and dangerous due to the presence of reactive mixture that may explode. Thus, a virtual prototyping analysis over the new burner design was carried out using the CFD technique. The developed model has supported the understanding of complex interactions between reactive flows and has delivered input for design optimization. The goal was to analyze the location of high temperature regions and emission characteristics in the new burner type under operating conditions at different flow regimes and molar concentrations.

The second STAGE-SOFC prototype is currently under manufacturing. After successful commissioning this proof-of-concept prototype will be transferred to project partner ICI Caldaie, where it will be tested for at least 3000 hours under real operating conditions starting in April 2017. 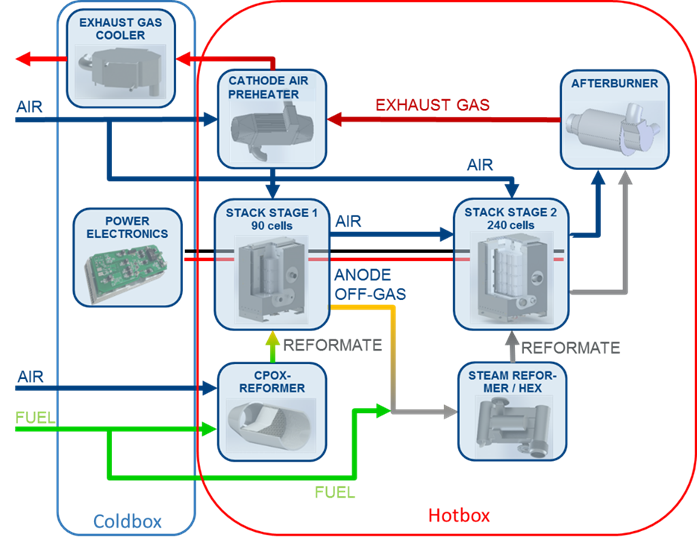