Grand Ballroom East (The Diplomat Beach Resort)
S. Oberhoffer (Institute of Industrial Science, The University of Tokyo), A. M. Iskandarov (Tokyo Institute of Technology, Japan), and Y. Umeno (Institute of Industrial Science, The University of Tokyo)
Ni/YSZ cermet is a widely used SOFC anode material, particularly due to its combination of good electric conductivity, high catalytic activity and low cost. Nonetheless, Ni/YSZ cermet anodes are facing unique challenges such as nickel agglomeration and reoxidation, eventually resulting in anode degradation. A solution to these problems might be obtained via a better comprehension of the underlying manufacturing processes, particularly the final H2-induced reduction reaction of NiO to Ni. Experimental approaches have contributed immensely toward a better understanding of these phenomena, yet are generally limited in terms of spatial and temporal resolution, thus motivating us to investigate the problem from a multiscale simulation viewpoint. In this study, we developed a reactive force field (ReaxFF) for nickel/oxygen interactions, which was specifically tailored toward molecular dynamics (MD) simulations of NiO reduction in H2 environments. The force field parameters were derived by fitting the ReaxFF energies and forces of various nickel/oxygen structures to the respective values of first-principles calculations. The structures considered here include bulk NiO, Ni2O3 and Ni3O4 at various densities, NiO under shear, the NiO(100) surface, oxygen vacancies in bulk and surface NiO as well as oxygen adsorbed onto the NiO(100) surface. The developed force field was subsequently used to predict the reduction kinetics of nano-scale NiO crystals in a H2 atmosphere at different temperatures and hydrogen partial pressures. Here, we observed a significantly improved structural stability of bulk NiO at temperatures over 700 K, compared to our previous ReaxFF nickel/oxygen description [1] and similar ReaxFF parameter sets published by other authors [2]. Besides quantifying the reduction rate, further core phenomena such as the induction period before the onset of a steady state reduction process, the pore formation in NiO at lower temperatures, as well as the importance of oxygen vacancies during the reduction are discussed and compared with experimental results.

Fig. 1 NiO nanocrystal after 0.2 ns of MD reduction simulation at a global temperature of 850 K and hydrogen partial pressure of 10 bars, using our previous ReaxFF parameter set (left) and the parameter set introduced in this publication (right). 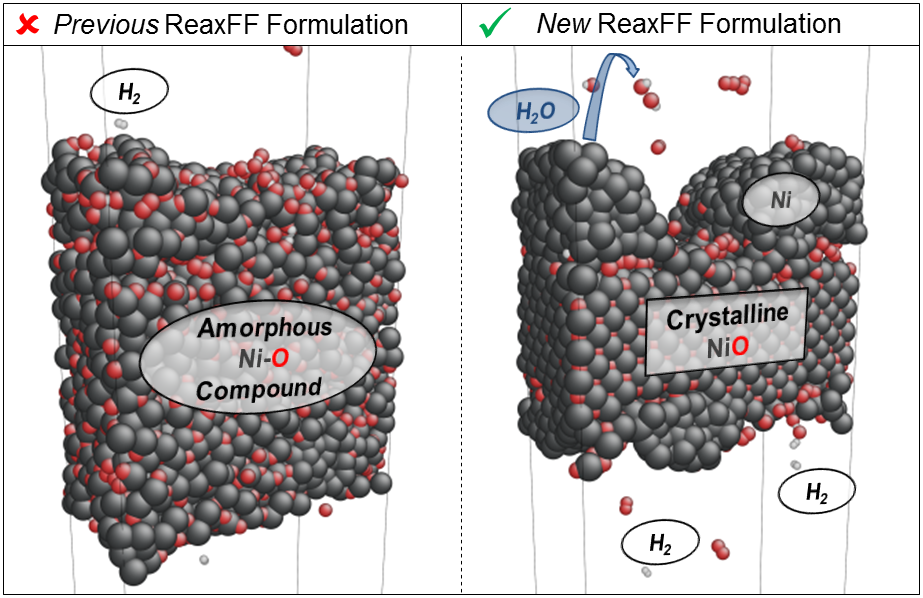