Atlantic Ballroom 1/2 (The Diplomat Beach Resort)
D. Vrecko, M. Nerat, D. Vrancic, G. Dolanc (Dept. of Systems and Control, Jozef Stefan Institute), B. Dolenc (Jožef Stefan International Postgraduate School), B. Pregelj (Dept. of Systems and Control, Jozef Stefan Institute), F. Meyer, S. F. Au (SOLIDpower/HTceramix SA), R. Makkus (Hygear), and Đ. Juričić (Dept. of Systems and Control, Jozef Stefan Institute)
Operation of the SOFC power system can be improved by upgrading the low-level controllers with a supervisory controller (see Figure 1). In this work a simple, model-free supervisory optimizer that adjusts references for the low level controllers is proposed. The optimization problem for the SOFC power system is formulated with the cost function depending on the electrical efficiency of the system and deviations of the system temperatures from their limits. Electrical efficiency is calculated as the ratio of the net electrical power to the total power obtained by burning the fuel. The dominant parasitic losses of the system are assumed to be mainly related to the air blower consumption. Based on efficiency analysis, which demands a number of simulations on SOFC power system model, the references for the burner lambda and stack outlet and inlet air temperatures are selected as optimization variables. The optimization problem is solved by using the extremum-seeking approach where optimum is sought directly on the process. An advantage of this approach is that it does not need a model of the system and exceeds the weakness of model-based optimizers, which assume nominal process condition all the time and do not take into account the degradation processes in fuel cells. Its disadvantage is it needs to probe the system at all time by imposing small variations on manipulated variables and delivers a convergence speed which is somewhat slower compared to the model based approach. A simple algorithm is designed to perform the model-free optimization. The algorithm is additionally augmented to incorporate changes in the current load in order to increase the convergence speed of the optimization at large load changes. The efficiency of the optimizer is governed by properly tuned parameters of the optimization algorithm. Proposed supervisory optimizer is assessed on a simulated detailed physical model of a 2.5 kW SOFC power system by applying large step current load changes. Simulation results indicate that the optimizer improves efficiency of the system by approximately 10 % compared to the low-level controllers and keeps the system temperatures within the safe ranges (see Figure 2). Due to its simplicity the optimizer appears appropriate for practical applications. 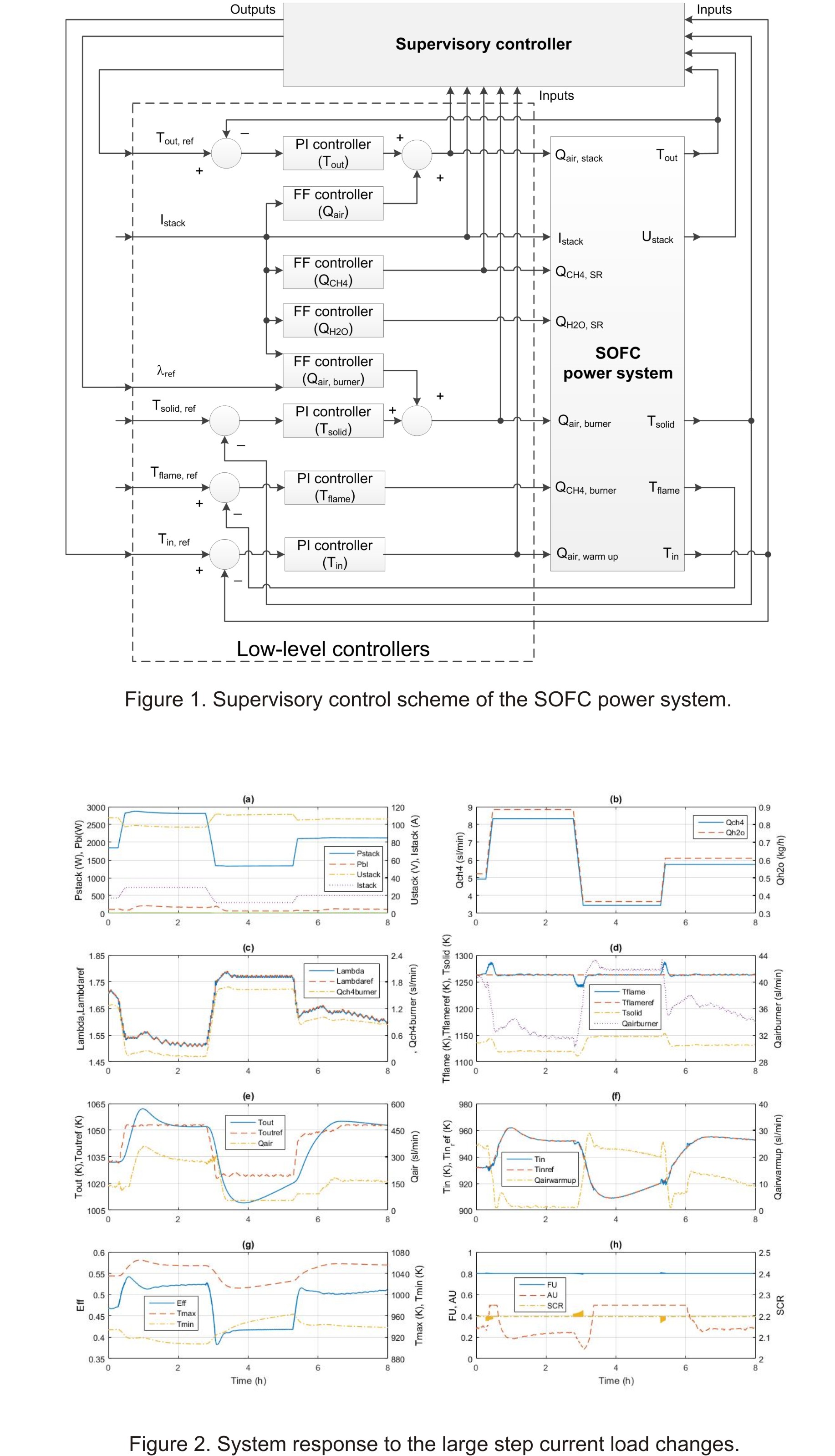