288
Kinetic Modelling of Catalytic Reactions in Solid Oxide Cells: Study of Its Coupling with Electrochemistry for Steam and CO2 Co-Electrolysis and Steam Reforming

The integration of renewable energies to the global energy market implies electricity storage. However, the available technologies for electricity storage have a low energy capacity and a short time-span. In this context, H2 or carbon molecules produced via water and/or water+CO2 electrolysis open up excellent perspectives for storing renewable electricity, especially the High Temperature Electrolysis (HTE). This technology, based on Solid Oxide Cell (SOC), consumes less electrical energy than low temperature electrolysis because of the energy demand is significantly lowered by the vaporization of water1. The required electrical power is also reduced at high temperature since the steam electrolysis is increasingly endothermic with temperature. Moreover HTE can also directly convert a mix of water and CO2 into syngas, (CO+H2) (co-electrolysis), which can be converted into methane or other hydrocarbon molecules.

Moreover, this type of co-electrolyzer can operate under pressure which increases the energy efficiency of the system, reducing the compression costs of the downstream chemical processing unit and increasing cells performance.2 In addition, as nickel present in SOC is known to catalyze CO and CO2 (COx) methanation and water gas shift reactions3, a pressure increase in the electrolyser leads to higher rates of these reactions.

HTE cells can also be used in fuel cell mode to generate electricity from methane and water4. In this case, nickel catalyzes steam reforming leading to syngas which can be used to produce electricity.

However, the contribution of these catalytic reactions are not well-known in co-electrolysis and fuel cell modes. In this view, we propose to evaluate their impact in a SOC fed with carbonated gases by establishing a kinetic model necessary for a complete electrochemical SOC modelling. This work was carried out on two different SOCs to establish kinetic models for co-electrolysis and steam reforming at atmospheric pressure and then under pressure.

The cells studied come from two different suppliers (A and B). In order to study the catalytic reactions, induced by nickel in the hydrogen electrode, other layers have been removed by sandblasting.

COX methanation catalytic tests were performed at 400°C with the cells reduced into powder with different inlet mixtures (CO and/or CO2 with H2 with COx/H2 molar ratio around 0.3). Tests were carried out with a total flow rate of 35NmL.min-1 (equivalent to 346NmL.min-1.cm-2cell and 245NmL.min-1.cm-2cell for cells A and B, respectively). These flowrates are far from those commonly used for electrochemical tests, but they allow to distinguish the catalytic activity of the two cells. The results showed that cells are not equivalent to each other regarding COx conversion whatever the conditions used (CO and/or CO2) (Figure 1). It also can be noticed that the CO2 hydrogenation activity is reduced after exposure to a CO/H2mixture (Figure. 2) due to carbon deposition blocking the active sites.

Secondly, catalytic tests were achieved to demonstrate the influence of water at the inlet (up to 15mol.% of water). The temperature was varied from 400 to 800°C after initial stabilization at 400°C. These tests confirmed the negative effect of water due to a less favorable thermodynamic.

Finally, methane steam reforming catalytic tests were carried out to simulate fuel cell feeding conditions (H2O/CH4 molar ratio around 2) with a total flow rate of 5.3NmL.min-1 (equivalent to 52NmL.min-1/cm-2cell and 37NmL.min-1.cm-2cell for cells A and B, respectively). These conditions make it possible to approach the operating conditions of an electrolyser. The temperature was varied from 600 to 800°C after initial stabilization at 600°C. It appears that the A cell is close to thermodynamic equilibrium up to 700°C followed by a decrease at higher temperature whereas the B cell does not exhibit this decrease (Figure 5).

The cells exhibit similar catalytic activities with respect to COX methanation and methane reforming. Simulations carried out using the COMSOL software allowed to select three kinetic models for atmospheric SOC operation5,6. To discriminate these models and propose a quantitative kinetic model for the SOCs operating under pressure, catalytic and electrochemical tests will be carried out up to 15 bars. Simulations will then be performed (COSMOL) to simulate the functioning of a cell by coupling catalysis, electrochemistry, gaseous and thermal flows. 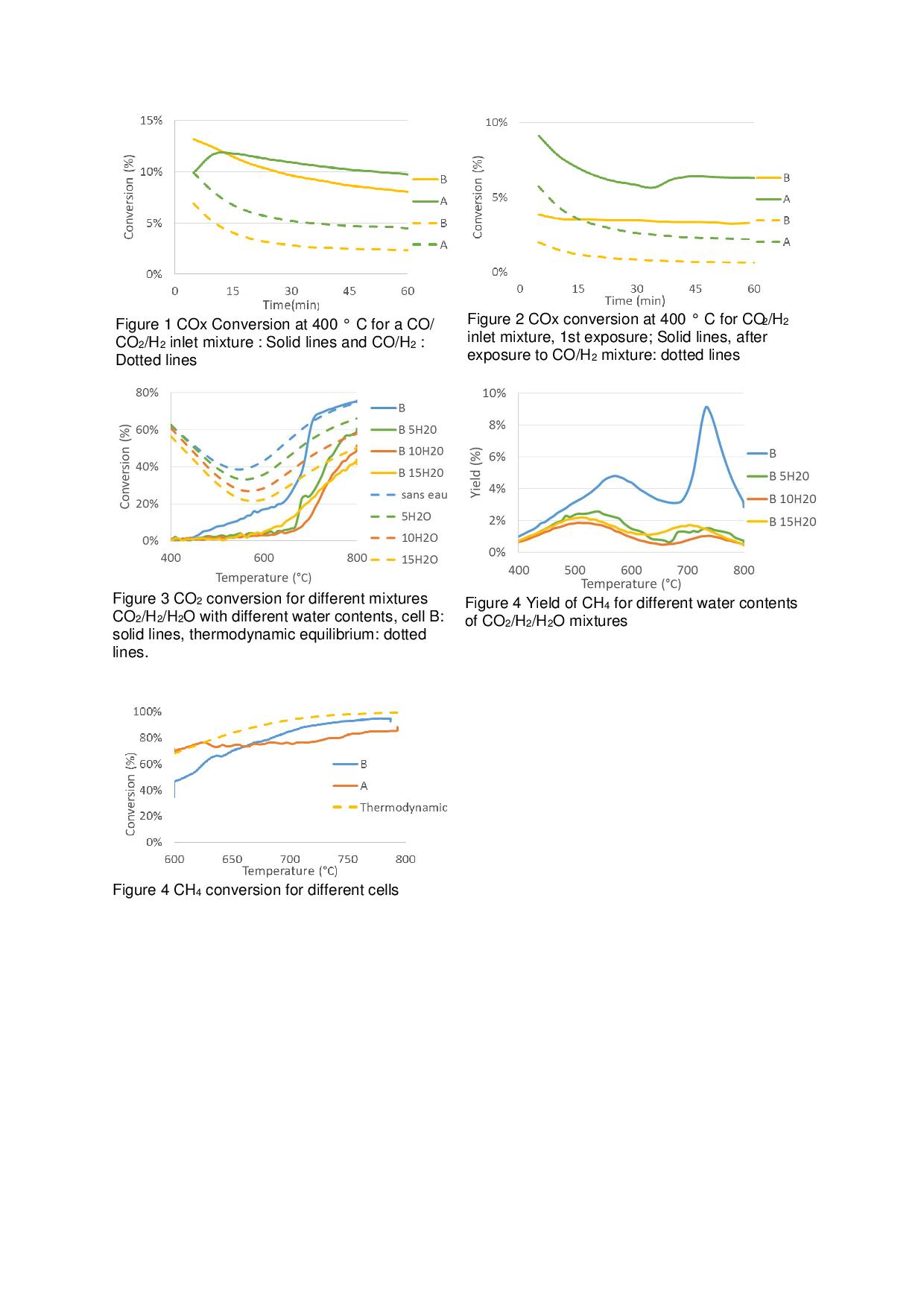