Atlantic Ballroom 1/2 (The Diplomat Beach Resort)
L. van Biert, A. Thallam Tattai, and P. V. Aravind (Delft University of Technology)
Fuel cells provide a way to convert gas to electricity with little formation of nitrous oxides, sulphurous oxides and particulate matter, due to the absence of high peak temperatures and pressures, and the low sulphur tolerance. When natural gas is used, solid oxide fuel cells (SOFCs) achieve the highest electrical efficiencies. This is due to ability of direct internal reforming (DIR), which enables the use of steam and waste heat produced by the electrochemical reaction to convert hydrocarbons to a hydrogen-rich gas. In addition, the heat consumption by the endothermic reforming reaction reduces the cooling requirement with cathode air, and hence the parasitic power consumption by the air blower. However, practical constraints limit the degree of DIR. At low temperatures, for example, slow kinetics limit the extent of the reforming reaction, while rapid kinetics at high temperatures may induce high temperature gradients, causing thermal quenching of the stack. Due to these issues, the fuel is usually partially pre-reformed.

Resolving the complex and coupled flow, species and temperature distributions, as well as the reaction rates of the reforming, water gas shift and electrochemical reaction, provides insight in the electrochemical performance of the SOFC, as well as the risk of carbon depositing, nickel oxidation and the induced thermal stresses. Computational fluid dynamics (CFD) can be used for this purpose, but require appropriate intrinsic kinetic rate expressions to quantify the methane reforming rate and accurately predict the species and temperature distributions in the SOFC. Although methane steam reforming is an established industrial process, SOFC anodes are usually developed to catalyse the electrochemical oxidation of hydrogen rather than reform methane, which may change the reforming mechanism compared to dedicated reformers. The complicated fundamental chemistry in SOFC anodes is poorly understood, which is reflected in a large number of kinetic expression, derived for various operating conditions and anodes.

In this study, the two most common rate expressions, one of the power law (PL) and one of the Langmuir-Hinshelwood (LH) type, are parameterised using methane conversion data, obtained in a previous study during single cell experiments on Ni-GDC anodes. Both the PL and LH rate equation have four fitted parameters, of which two are the rate constant and the activation energy. In addition, reaction orders of methane and steam are fitted for the PL, while an oxygen adsorption isotherm is fitted for the LH rate equation. The kinetic parameters are fitted by minimisation of the coefficient of variation of the rate constant, where SOFC anode compartment is assumed to be a one-dimensional ideal plug flow reactor.

A CFD model is developed of a single channel of the single cell test setup, to compare methane conversion rates with the experimental data, and quantify the difference between the distributions of species, temperature and reaction rates predicted by the PL and LH rate equation. The CFD model is used to solve the mass, momentum, energy, species and charge balances. User defined functions are added to resolve the current distribution, cell voltage and implement the kinetic expressions for methane steam reforming rates. The various experimental conditions are simulated with the CFD model, evaluating different inlet compositions of methane and steam, cell temperatures between 973 and 1023K, and current densities between 0 and 1000 A/m2. The methane conversions calculated with the single channel CFD model are then compared to those obtained in the single cell experiment.

Although the CFD model with the LH type rate equation achieves a better fit, both the PL and LH equation show statistically good agreement with the experimental conversions. However, the results reveal that the spatial variation of the reforming reaction rate is quite different for the two rate equations. The LH kinetics predicts relatively high reaction rates at the inlet section, which results in temperature gradients up to 50% higher compared to the PL equation. In addition, the PL fails to predict the enhancement of the reforming rate by the electrochemical reaction due to the apparent negative reaction order of steam, while this effect is captured correctly by the LH kinetics.

The method proposed in this paper can be used to predict the electrochemical performance and thermal gradients in various SOFC operating with high degrees of internal reforming. This knowledge allows to minimise or eliminate the need of pre-reforming, and ultimately provide ways to alter SOFC construction such that complete internal reforming is possible without imposing adverse condition on the stack. 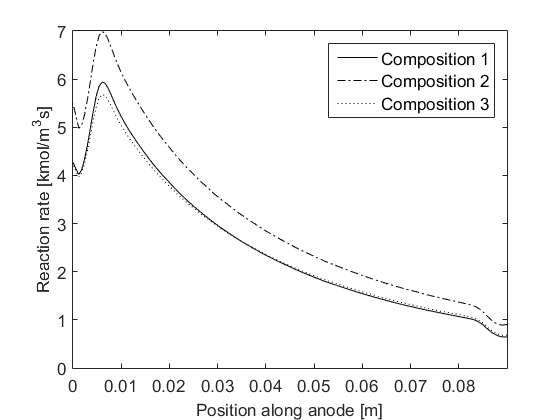