115
Study of the Rate Limiting Steps and Degradation of a GDC Impregnated La0.6Sr0.4Co0.8Fe0.2O3-δ Cathode

The mechanisms through which the impregnated catalysts reduce the polarization resistance and even enhance durability are not completely well understood yet, especially when non conventional catalysts are impregnated (i.e.: electrolyte nanoparticles into mixed ionic and electronic conductors –MIECs- electrodes), as the performance improvement relies upon the microstructure and coupled interactions between the materials.

In this work, a cathode surface modification by nanoparticle impregnation was carried out. La0.6Sr0.4Co0.8Fe0.2O3-δ –LSCF- ceramic cathodes impregnated with Ce0.8Gd0.2O3-δ –GDC- nanoparticles were characterized with electronic scanning –SEM- and transmission –TEM- microscopy. The electrochemical response as a function of temperature, oxygen partial pressure -pO2-(10-4 < pO2< 1 atm) and time was evaluated by electrochemical impedance spectroscopy –EIS. Reproducible and homogeneous impregnation were obtained, which reduce the Rp,c around 30% in the temperature range between 400ºC and 800ºC and during 500 h at 700 ºC.

Through the pO2 measurements, the effect of the impregnation on the rate-limiting steps involved was analyzed. The EIS spectra show at least two arcs, where the pO2 dependence of the low frequency arc (µ(pO2)-n, n ~ 0.7) suggests a complex mechanism where O2-gas diffusion is not the unique driving process. The complexity of this mechanism is also verified by comparing EIS spectra collected at several pO2 by using Ar and He as gas carriers, where the observed reduction of impedance as a consequence of lower diffusion of O2 in He, was lower than expected. On the other hand, the high frequency arc, with a Gerisher-type impedance, is almost independent of pO2. Fig. 1d shows how that the surface modification by GDC-impregnation mainly affects the low frequency contribution. Although a clear effect has been observed in the Rp,c values as a consequence of impregnation, no significant difference was detected in the time evolution behavior at 700 C in air. This means that GDC impregnation reduces the cathode polarization resistance but seems not to alter significantly the origin of the degradation processes. 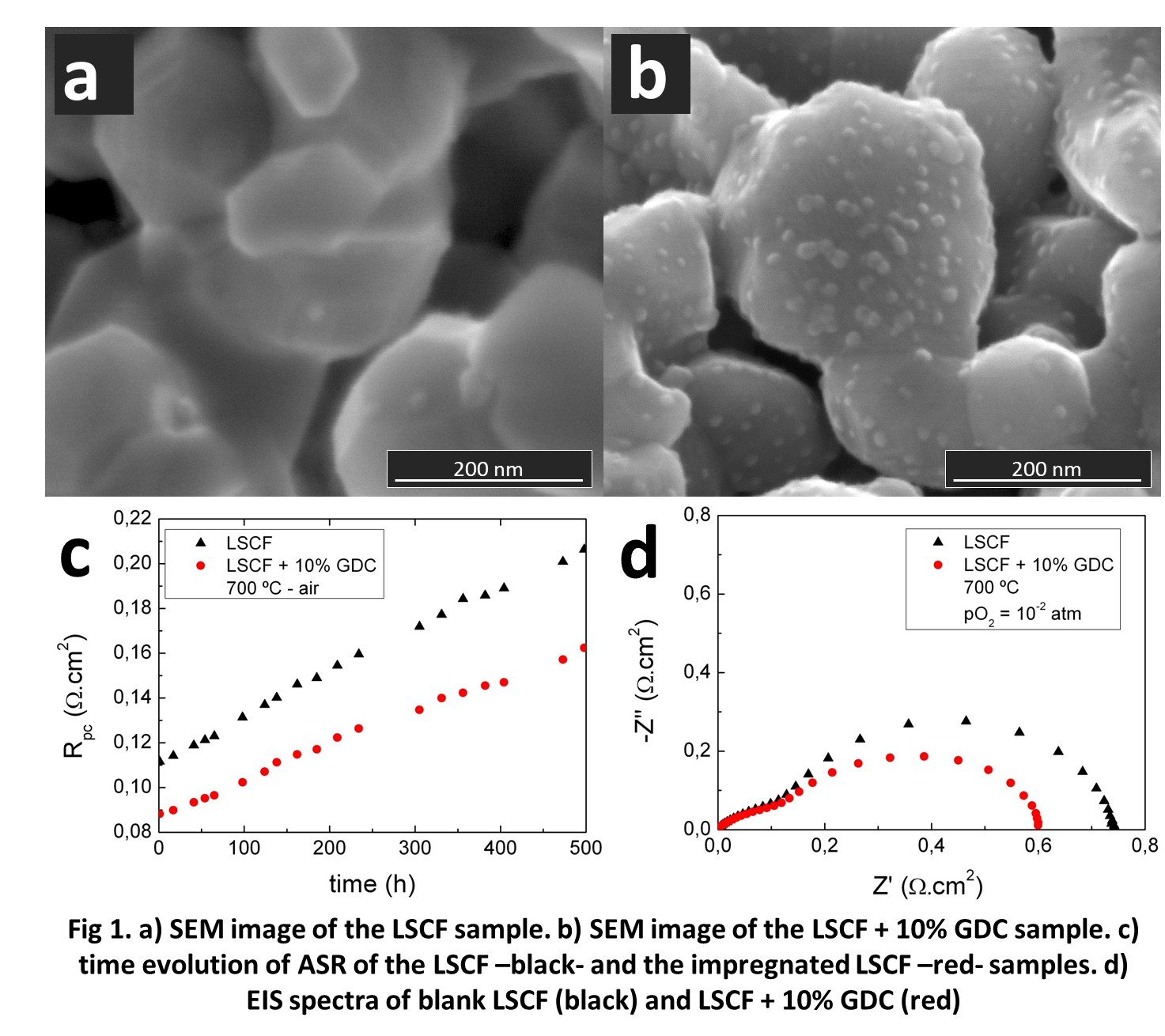