Grand Ballroom East (The Diplomat Beach Resort)
Y. Ma and J. D. Nicholas (Michigan State University)
A Multi-Beam Optical Stress Sensor (MOSS) provides a contact-free, in-situ platform to measure thin film stress based on the curvature of a bilayer sample. Originally, this instrument was used to measure thin film stress during deposition. However, when combined with a specially designed chemical reactor, it can be used to measure the oxygen surface exchange coefficient of thin film materials [1,2, 3]. In this work, the oxygen exchange coefficient (kchem), stress, biaxial modulus, thermal expansion coefficient (CTE) and chemical expansion coefficient (CCE) were measured as a function of temperature via the wafer curvature technique.

Phase pure Pr0.1Ce0.9O1.95 (PCO) powder was prepared through glycine nitrate combustion and subsequent calcination at 1100oC in air. This powder was then pressed in a stainless steel die and fired to 1450oC to produce a pulsed laser deposition (PLD target). In preparation for PLD, (001) oriented 9.5% yttria doped zirconia (YSZ) and (001) oriented magnesium oxide (MgO) substrates (Crystec, GmbH) were pre-annealed at 1450oC for 20 hours to remove residual stress within them. PCO PLD was then conducted at 680oC for 30 min, with a 10-5 torr oxygen partial pressure. After deposition, the PCO bilayers were re-equilibrated with air by firing them in air at 1000oC for 1 hour.

To measure kchem, a solution of Fick’s second law was fit to the bilayer curvature response of PCO|YSZ samples responding to abrupt oxygen partial pressure changes (0.21 – 0.021), as shown in Fig. 1 (a). Then the data was fitted to to get kchem values. To measure the biaxial modulus, CTE and CCE, curvature values for PCO|YSZ and PCO|MgO were measured from 25oC to 700oC with a 0.5oC/min ramping rate, converted to stress using Stoney’s equation, and determined using the dual substrate method [4].

This material is based upon work supported by the Department of Energy under Award Number DE-FE0023315.

Fig 1. (a) Raw and fitted PCO-YSZ curvature relaxation data and (b) a PCO kchem comparison 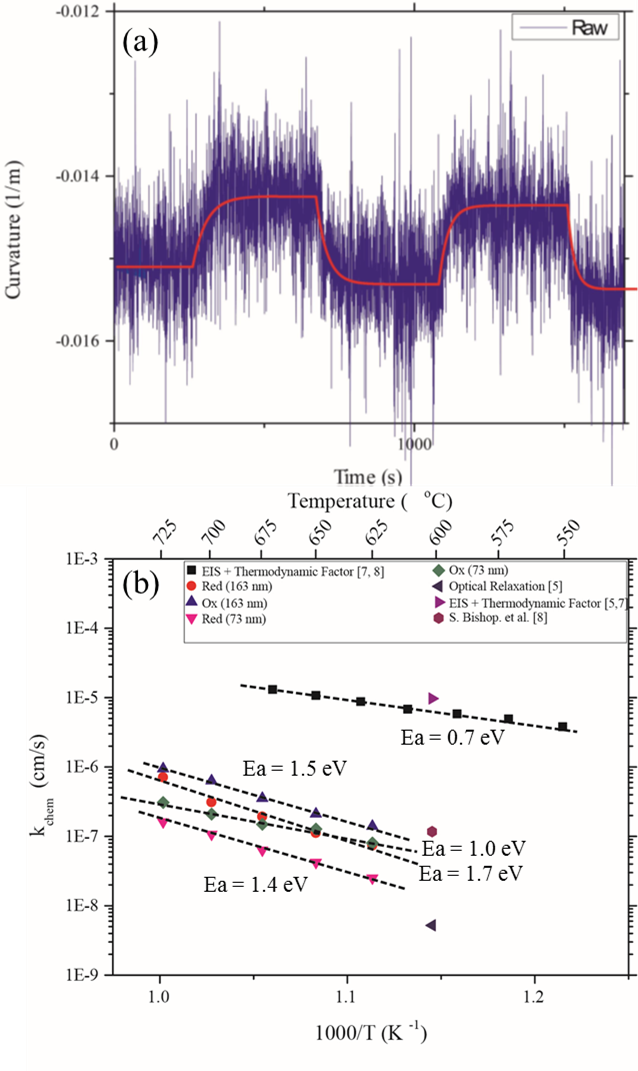