Floridian Ballroom G, Lobby Level (Hilton Orlando Bonnet Creek)
E. Lojou, A. de Poulpiquet, D. Ranava (CNRS-AMU), N. Mano (CRPP-CNRS), M. T. Giudici-Orticoni (CNRS-AMU), and R. Gadiou (IS2M-CNRS)
Fuel cells using renewable resources are attractive devices able to take up the energy challenges launched by fossil fuel exhaustion. Hydrogen can be produced from biomass and biocatalysts can replace noble metals such as platinum. Hydrogenase enzymes arise as particularly efficient biocatalysts for H2 oxidation. However, bottlenecks must be overcome before the development of these biofuel cells: 1- biohydrogen production is rate limited, 2- many hydrogenases are inhibited by oxygen and CO, 3- the size of the enzymes limits their electrical connection, hence the current densities. This work will discuss some solutions to get through these limitations, such as controlled bacterium consortia to determine the biophysical parameters able to enhance bioproduction of H2, and the efficient immobilization of an O2-tolerant hydrogenase which allows the development of a new generation of H2/O2 biofuel cell.

A multidisciplinary approach including microbiology, microscopies and electrochemistry was used for the study of a synthetic microbial consortium in view of the optimization of biohydrogen production. Electrochemical tools, associated to the full characterization of carbon materials, were used to design a H2/O2 biofuel cell.

Numerous microorganisms can produce hydrogen by “dark fermentation”. Literature essentially reports the use of pure microbial cultures to produce biohydrogen from simple sugars. In this work one bacterium from Clostridium (H2 producer) and one from Desulfovibrio (H2 producer or consumer depending on its environment) have been studied as pure and mixed cultures. We demonstrate in this work (i) a physical interaction between the strains via nanotubes, (ii) an exchange of cytoplasmic constituents, (iii) a higher hydrogen production by the consortium compared to isolated bacteria. A modification in the metabolic pathway is proposed that can explain such results.1

Besides, screening energetic pathways in exotic micro-organisms lead to the identification of a membrane-bound hydrogenase which oxidizes hydrogen into protons with high efficiency while presenting outstanding O2, CO and temperature resistances.2,3 When immobilized onto carbon nanotube networks and in combination with a multicopper oxidase for O2 reduction, this enzyme has been proved to be a valuable candidate in a preliminary H2/O2 biofuel cell.4

Fishbone carbon nanofibers (CNFs) are other promising carbon materials which are electrically conductive, and bear lots of reactive sites due to the stacking of graphene cones. They can be quite easily functionalized for an efficient entrapment of proteins. We report in this work the use of such synthesized CNFs for modification of electrodes and immobilization of hydrogenase. We discuss the physico-chemical parameters that limit the efficiency of the bioelectrode, and define their optimization for a great enhancement of the current densities for H2 oxidation.

Combined with a thermophilic multicopper oxidase at the cathode, immobilization of hydrogenase on CNFs allow to design a new generation of a high power H2/O2 biofuel cell able to be fed in the future with H2 produced from biomass.5 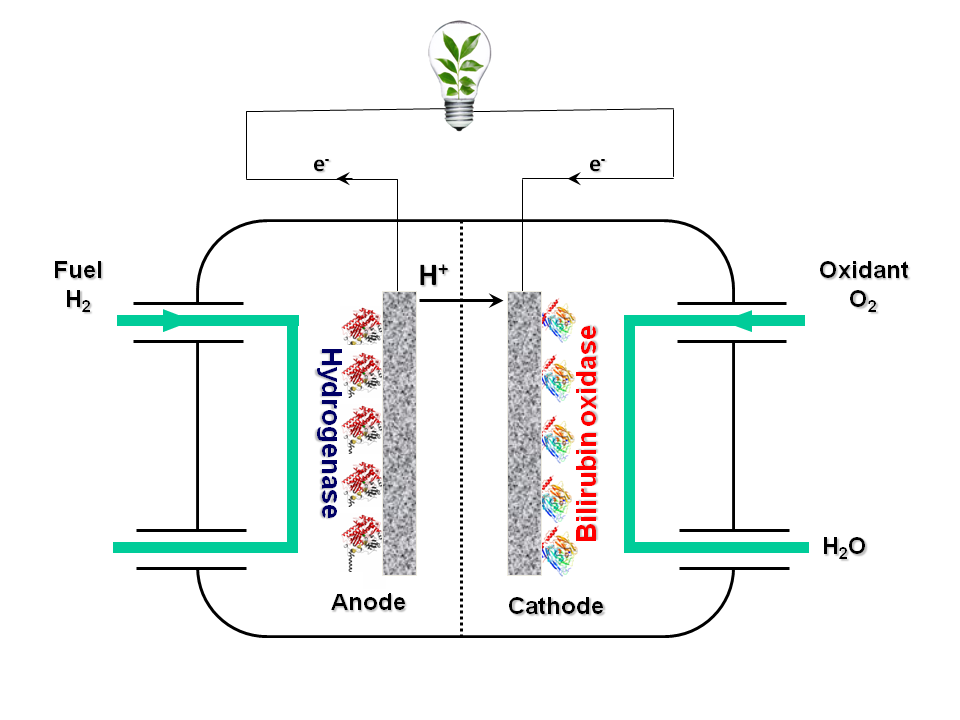