Long-time leader in power technologies, STMicroelectronics has realized significant investments in the development of new miniaturized solutions for energy storage. This study focuses on the reliability performances of EnFilm™ HiCap batteries, characterized by 1x1 inch footprint and a nominal capacity of 700µA.h between 4.2V and 3.6V. The positive electrode material is made of lithium cobalt oxide (LiCoO2) and the solid electrolyte is a lithium phosphorus oxynitride (LiPON), a material originally developed and patented by Oak Ridge National Laboratories [1]. Both thin films are deposited by sputtering techniques.

Despite many recent studies, the all-solid-state systems remain minority regarding liquid electrolyte Li-ion technologies. Today widely developed, the Li-ion batteries are extensively used in portable instruments especially due to their large capacities. However, the Li-ion systems present a few vulnerabilities. As highlighted by several studies, the graphite/electrolyte interface is considered by many researchers to be the major source of reliability issue, due to reactions between the anode and the electrolyte [2]. Indeed, many works reveal that a large irreversible capacity loss is initiated by the formation of an interfacial SEI film, resulting from the irreversible consumption of Li+. Hence, thin film batteries should present a great interest regarding reliability behavior, since no formation of SEI layer is expected. In this paper we propose to investigate further the ageing characteristics of all-solid-state Li/LiPON interface during an extended electrochemical cycling study.

Experimentally, batteries were submitted to series of potentiodynamic charges and galvanostatic discharges (1.4C current rate) at a temperature of 60°C, in order to accelerate the ageing mechanisms. Electrochemical impedance spectroscopy (EIS) measurements were regularly performed at 30°C, in order to detect any evolution of each contributor of internal resistance [3]. The equivalent circuit shown in figure 1 was used to model the impedance data, so that some key physical parameters might be extracted, such as the exchange current density at Li/LiPON interface. As shown in figure 2, the impedance data analysis reveals the relatively great stability of interfacial contributions, even after 3000 cycles. These results prove that the solid character of the electrolyte confers to the system an electrochemical integrity for very long periods of use. Furthermore, the stability of the exchange current extracted for Li/electrolyte interface (table 1) reveals the absence of any chemical or morphological modifications, which are at the origin of most failures reported for liquid electrolyte Li-ion systems.

To conclude, this paper highlights the reliability performances of all-solid-state thin film batteries technology, through the electrochemical characterization of the Li/LiPON interface at different steps of the cycle life. Besides, this study demonstrates that EIS measurement turns out to be a successful tool of failure mechanisms investigation and understanding. 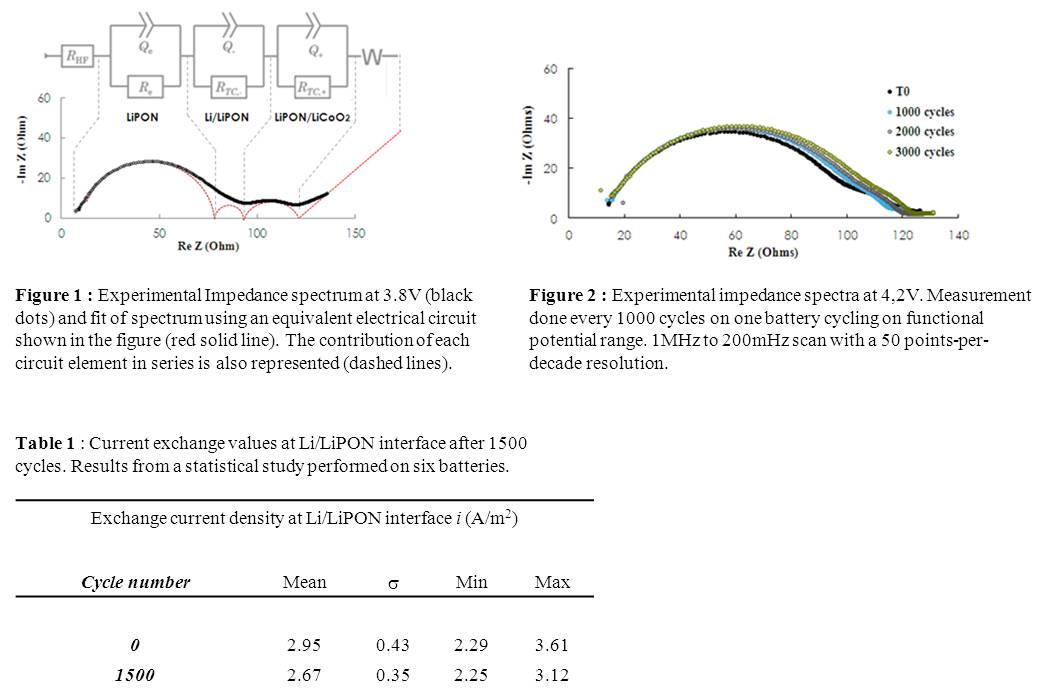