Grand Foyer, Lobby Level (Hilton Orlando Bonnet Creek)
E. Hðrk, R. Jðger, and E. Lust (Institute of Chemistry, University of Tartu)
An intensive research has focused on the development of electrocatalyst for the oxygen electroreduction reaction (ORR) because in a PEM fuel cell, the major limit on performance is the slow kinetics of the cathodic oxygen electroreduction [1-5]. During last decade various binary metal and nonmetal carbides have been used as raw materials for synthesis of micromesoporous carbons with exact pore size distribution. It has been recognized that, depending on the heat-treatment temperatures different carbon materials exhibit different properties, such as surface area, porosity, electrical conductivity and cathodic oxygen electroreduction activity [6-9].

The main aim of this work is to extend the previous study in order to characterize the ORR kinetics on Pt nanoparticles in alkaline media using two crystallographically and structurally very different carbon supports. For analysis of data it was assumed that the main pathway on carbide derived carbon (CDC) support activated with Pt nanoparticles is the direct four electron ORR [6,10,11].

The carbon-supported Pt (20wt% metal) electrodes have been tested as oxygen reduction catalysts in 0.1M KOH solution. The novel non-conventional micro-mesoporous carbide derived carbon powder, synthesized from molybdenum carbide (Mo2C) at 750°C using the high-temperature chlorination method has been used as an electrocatalyst support for oxygen electroreduction. For comparison the parameters for commercially available VulcanXC72® and (20wt%) Pt-VulcanXC72®have been obtained.

XRD, SEM-EDX, HRTEM, SAED and EELS methods were applied for the structural and electronic characterization of materials. Gas adsorption data at liquid nitrogen temperature was used for the porosity analysis of materials under discussion.

Results of the X-ray diffraction analysis show that the Pt nanoclusters have been deposited mainly as the face-centered cubic (fcc) crystals at both carbon supports. The metal particles were distributed uniformly on the carbon supports, and the average particle size of the Pt nanoclusters at (20wt%) Pt-C(Mo2C) and at (20wt%) Pt-VulcanXC72®were 4.2 and 5.7nm, respectively.

The electrochemical measurements were carried out in a three-electrode electrochemical cell. Electrochemical characteristics for unmodified micro‑mesoporous carbons have been established by cyclic voltammetry (CV) and rotating disc electrode (Figure) methods. Potentials were measured against Hg|HgO, 0.1M KOH reference electrode. RDE data were measured at rotation rates from 0 to 3000 rpm (v=10 mV∙s-1) and in the region of potentials from +0.21 to -0.75 V vs. Hg|HgO, 0.1M KOH. Cyclic voltammograms were measured at potential scan rates (v mV/s) 5, 10, 20, 30, 50, 70, 100, 150 and 200, in both Ar and O2 saturated solution. The solutions were saturated with Ar or O2, respectively, between measuring of each voltammogram.

The Pt-C(Mo2C) catalyst showed noticeably higher activity (DE1/2 ~ 30mV) toward the oxygen electroreduction reaction at room temperature compared with that for the Pt-Vulcan electrode. The four-electron oxygen reduction mechanism has been established for the (20wt%) Pt-C(Mo2C) and (20wt%) Pt-VulcanXC72®catalysts. 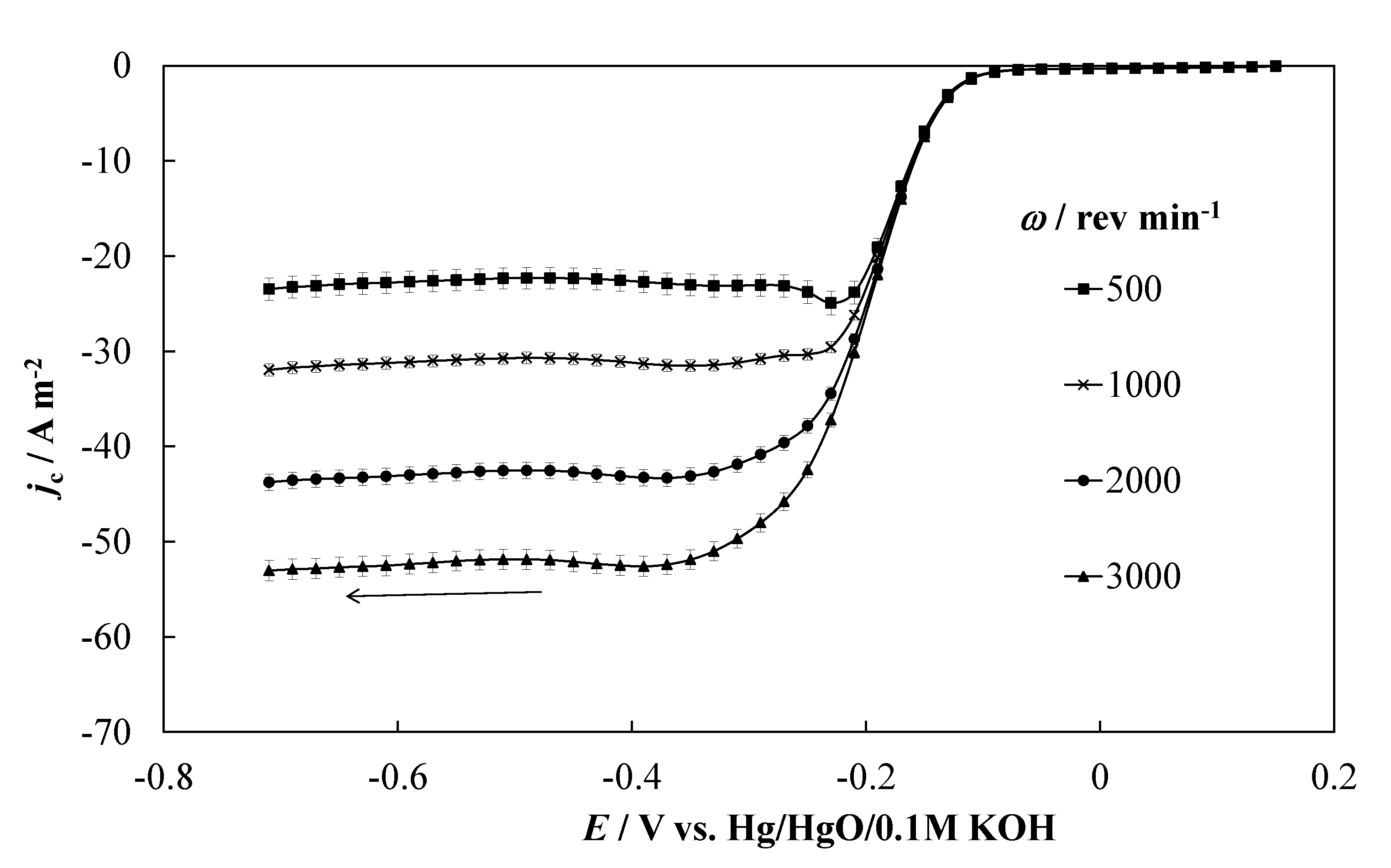