One of the major degradation involves the electrocatalyst, including corrosion of the catalyst support leading to structural changes in the catalyst layer. These structural changes can cause changes in the PEM fuel cell performance due to loss of catalyst utilization, electronic/protonic conductivity, and changes in the mass transport of the gases and product water.  A primary cause for changes in the structure of the catalyst layer is due to the corrosion of carbonaceous electrode supports leading to electrode collapse, reduced active catalyst area, and increased surface hydrophilicity.  The carbons typically used as the support for Platinum catalysts in proton exchange membrane fuel cells (PEMFCs) are vulnerable to electrochemical corrosion, especially during potential excursions generated by startup/shutdown cycling and local anode starvation [2].

Cathode catalyst layer thinning is regularly observed and increases losses associated with mass transport. This catalyst layer thinning is coupled with loss of porosity in the catalyst layer.  The graphitic content of catalyst supports increases during the operation of fuel cells at high potentials which is likely due to a decrease of amorphous carbon due to corrosion. Support corrosion also leads to detachment and agglomeration of catalyst particles, while weakening of the carbon structure allows collapse of electrode pores and severely limits gas transport [3].

Thinning of the catalyst layer can be due to loss of carbon through carbon corrosion or due to compaction and loss of void volume. This loss of cathode layer porosity is shown in Figure 2, where Figure 2a is a digital TEM image of the fresh cathode catalyst layer, 2b is after operation at 1.2V for 10 hours, and 2c is after 40 hours operation at 1.2V.  The initial catalyst layer porosity is approximately 40%, decreasing to 33% over 10 hours, and is only about 7% after 40 hours.

The air/hydrogen (or hydrogen/air) fronts during shut-down/start-up have been shown to cause high potentials leading to carbon support corrosion and catalyst layer degradation.  The anode catalyst layer ability to conduct the oxygen reduction reaction (ORR) plays a major role in MEA degradation during H2/Air start-stops.  By limiting the anode participation in ORR during these phenomena, the degradation can be reduced.  Other mitigation techniques can also be employed.

The catalyst layer fabrication process using different solvents can have a dramatic effect on the performance/durability of fuel cell electrodes, although the catalyst ECSA durability is largely unaffected.  Catalyst loading has a significant impact on performance of MEAs made via decal process using a more traditional water/alcohol/glycerol mixture in the ink.  The fact that the ECSA shows similar decreases during the potential cycling indicates that other changes in performance are occurring.  Further measurements show that the mass transport resistance is decreasing during the potential cycling.  Enhanced performance and impedance behavior of ultra-low loading cathode with potential cycling have similarity with performance improvement with HelOx (or air flow increase). Thus, electrode structural changes occur during potential cycling which favor oxygen diffusion, and lower mass transport resistance. 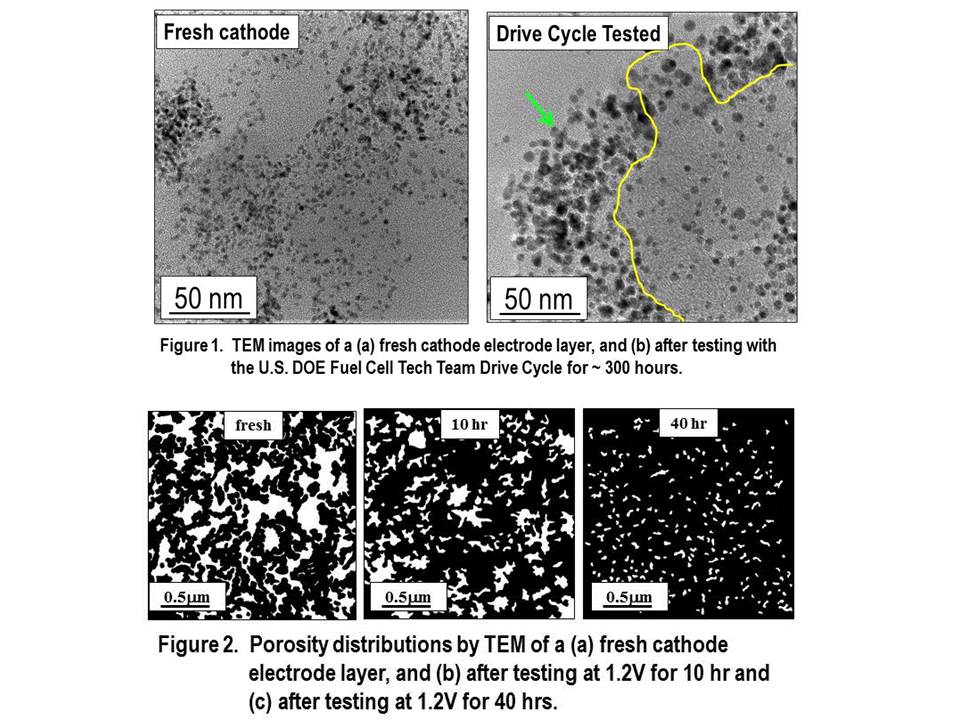