First, we screened reaction conditions for electrochemical carboxylation of hexafluorobenzene (1a) as a substrate. When constant current electrolysis of 1a was carried out in DMF using a one-compartment cell equipped with a Pt cathode and an Mg anode with 3 F/mol of electricity in the presence of carbon dioxide, reductive cleavage of a C-F bond on the phenyl ring followed by reaction with carbon dioxide took place to give pentafluorobenzoic acid (2a). After reaction conditions screening, 2a could be obtained in 73% 19F NMR yield by electrolysis of 1a at –40°C with 5 mA/cm2 of current density. After recrystallization with hexane and acetone, pentafluorobenzoic acid (2a) was obtained in 65% isolated yield as a pure product.

Other results of electrochemical carboxylation of polyfluoroarenes and proposed reaction mechanism including regioselectivity of the carboxylation will be presented. 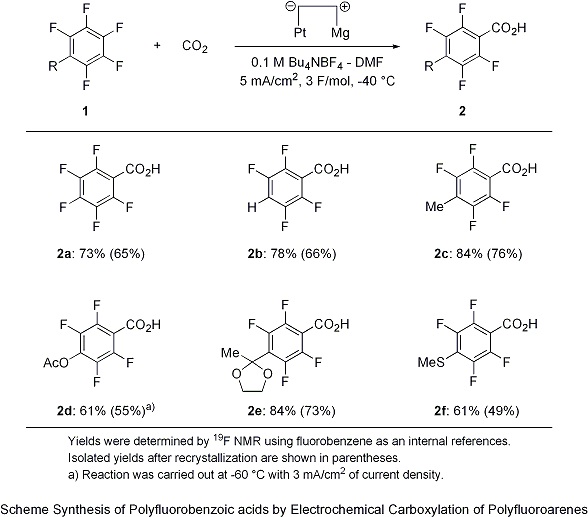