For the future development of molecular electronics, nanoscale molecular devices should be constructed using nanometer-sized electrical wiring. To obtain high-quality devices composed of a few molecules, the nanoscale wiring and the device should have a constant interface. For this purpose, single-walled nanotube (SWNT) has been synthesized with several nanoparticles like 5,15-Bispentyl-porphyrinato Zinc(II) (BPP-Zn), N,N’-bisalkyl-1,4,5,8-naphthalenediimide (Cx-NDI, where x is number of methylene units in the alkyl side-chain) and 1:12 phosphomolybdic acid (PMo12). Then, the electrical property of the complex was measured by using point-contact current imaging atomic force microscopy (PCI-AFM).[1,2]

Figure 2. (a)AFM image of SWNT/BPP-Zn complex. Almost of all surface of SWNT was covered by the nanoparticles. Inset is I-V curves obtained on SWNT and porphyrin aggregations. (b) AFM image of C3-NDI nanoparticles adsorbed on the side-wall of SWNT. Insertion: molecular structure of C3-NDI.

First of all, we prepared BPP-Zn which has two pentyl groups to increase a solubility of SWNT/porphyrin complex [2]. SWNT (0.5 mg) was added to a DMF solution of BPP-Zn (0.1 mM, 5 mL), and then sonicated for 30 min. The solution was centrifuged at 1000 G and the top was collected. SWNT/BPP-Zn complex was collected by a filter (0.5 mm, MILIPORE) and excess BPP-Zn was removed by rinsing by with CHCl3 (100 mL). The SWNT/BPP-Zn was added to DMF (2 mL) and complex was sonicated for 30 min. The DMF solution of SWNT/BPP-Zn complex was casted to a mica substrate and the surface was observed by the tapping-mode AFM (Fig. 2(a)). On the half of the substrate, Au was deposited as electrode with 30 nm thick.

The complex having 2.5-4.5 nm heights was observed. Since a diameter of SWNT is about 1.1-1.5 nm, height of porphyrin-aggregate on SWNT is about 1-3 nm, corresponding 2-6 porphyrin monomers. We measured the conduction property of the complex using PCI-AFM successfully. The results reveal the conduction property of SWNT/porphyrin complex. I-V curve was symmetric where porphyrin aggregate was not absorbed on SWNT, while it was asymmetric where porphyrin was absorbed. This means porphyrin nanoparticles work as rectification devices on the SWNT wiring.

Figure 2(b) shows an AFM image of SWNT/C3-NDI complex. It shows nanoparticles about 3-5 nm diameter of NDI adsorbed on the sidewall of SWNT. By changing the number of methylene unit of NDI, the shape of I-V curve changed. The results show that the majority of SWNT was metallic using C3-NDI to make a complex, while semiconducting when C9-NDI. Besides, the rectification ratio increased and band gap decreased as the size of the molecular nanoparticles increased.

The rectification properties of SWNT/PMo12 complex were strongly determined by the property of nanotubes. Rectification ratio decreased and band gap increased as particle size was larger if SWNT is semiconducting, while opposite in the case of metallic SWNT. PMo12 also has interesting electric properties. I-V curve obtained by PCI-AFM always show peaks. The peak called negative differential resistance (NDR). Because NDR is one of the components of noise generator, a network of SWNT/PMo12was fabricated and bias was applied. Amplitude of current, noise strength, was increased as bias increased from 0V to 125V (Fig. 3). Further, current became unstable when 150 V was applied to the same device and then generated pulse current. The pulses are obtained as special case of the instability. The phenomena are expected to be utilized as neuron devices used in neuro-computing.

In conclusion, all BPP-Zn, NDI and PMo12 molecules can behave as rectification device on SWNT. PCI-AFM is a useful technique to detect the electrical properties of such kinds of systems described above. It is important to control rectification properties of the complex to realize electronic nanodevices. PMo12/SWNT network generated pulse when 150V was applied. It is expected to be used in neuro-computing. 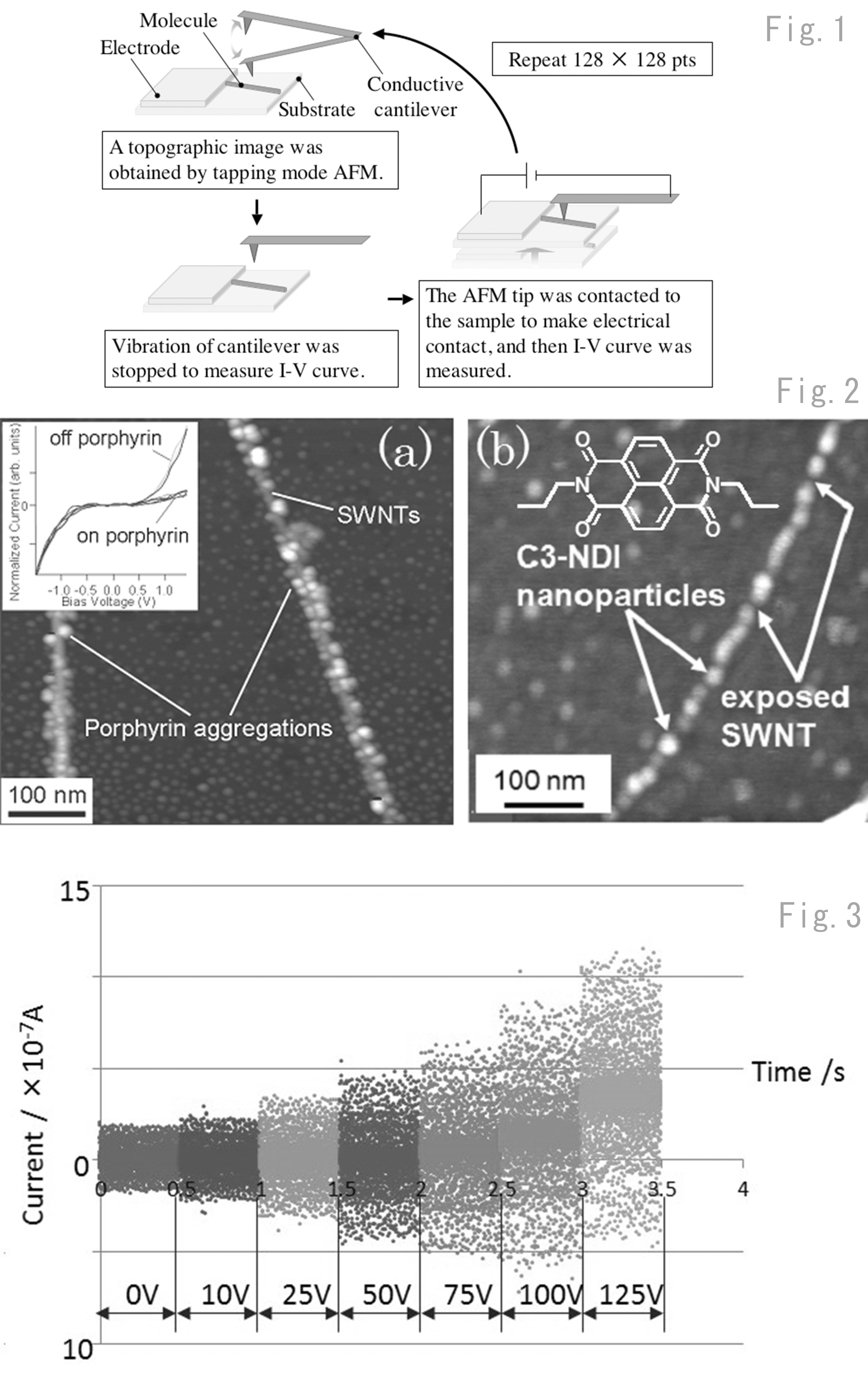