Pseudocapacitors are one class of supercapacitors that have the ability to store higher amounts of charge compared to purely electrical double layer capacitors (EDLC) due to the inherent properties of their faradaic charge storage mechanism. In these devices, the bulk redox material stores electrical energy by a transfer of charge between the electrode and current collector. For wide scale implementation, it is important to consider materials that are low cost, environmentally friendly and highly abundant, especially for stationary energy storage. Electroactive conductive polymers have the potential to address these major issues, along with having good intrinsic conductivity (ranging from a few S cm−1 to 500 S cm−1 in the doped state[1]), fast doping and de-doping processes, and ease of manufacture, particularly as thin films. Conducting polymer electrodes, however, still require improvement of their electrical charge capacity and stability.

Previous research has shown that polymers containing redox groups, such as sodium lignosulfate, can be entrapped within polymer electrodes to increase the electrode’s charge capacity. [2] In this presentation, we will shown that the charge capacity of conducting polymer electrodes can be further increased by confining a readily available prototypical organic redox molecule, such as 1,4-benzoquinone (QN) as shown in Figure 1. This redox molecule presents a theoretical charge capacity of 496 mA h g-1 whereas polypyrrole (PPy) has that of 135 mA h g-1 [3]. When electrodes are prepared using typical current settings and monomer concentrations, electrode synthesis is challenging. Here, we will discuss the effects of deposition conditions on film growth, QN confinement, and the electrochemical properties of the resulting polymer films.

The combined redox processes of the pyrrole and the quinone resulted in films with increased charge storage capacity and capacitance, as shown in Figure 2.

Figure 1. Schematic of the electrochemical processes occurring during charge and discharge of the PPy/QN electrodes.

Figure 2. Specific capacitance vs. potential of PPy/QN films with increasing composition of quinone, along with the pure polypyrrole control electrode.

In PPy/QN electrode materials, the highest average specific capacitance of 550 F g-1 was achieved when films were prepared with a pyrrole concentration of 0.085 M (QN=0.09 M), which represents a significant improvement over pure PPy with a highest average specific capacitance of 249.0 F g-1. Using higher concentrations of pyrrole during film synthesis resulted in higher masses (increased thickness) due to the availability of the monomer, but lower compositions of QN in the film. On the other hand, lower concentrations of pyrrole lead to poor polymer deposition as most of the current was consumed by the reversible oxidation of quinone rather than the irreversible oxidation of the monomer necessary for electrochemical synthesis. This work will enable the development of supercapacitor materials that combine the high storage capacity properties of redox molecules with the high conductivity and capacitance of intrinsically conducting polymers such as PPy. 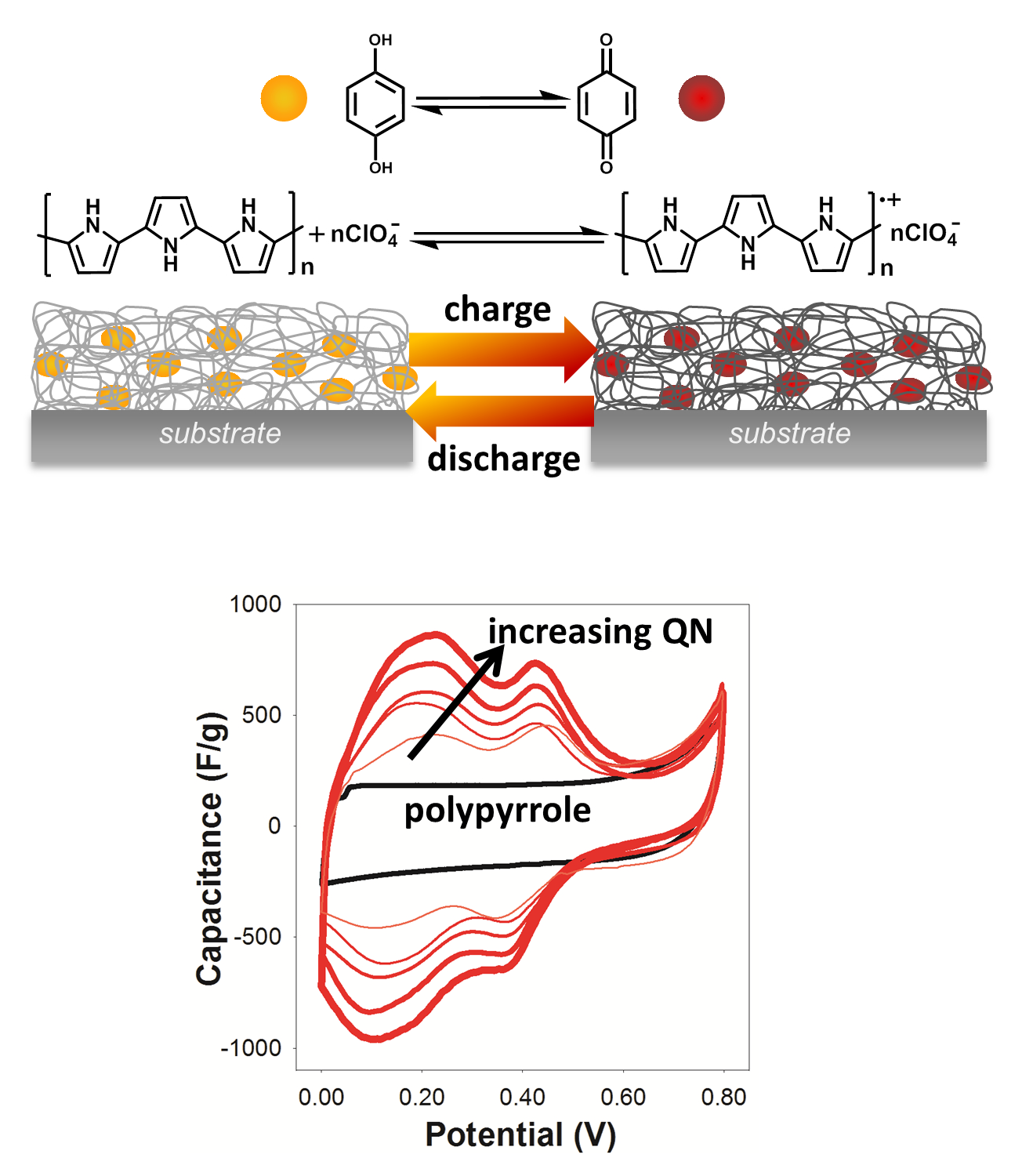