We have reported that some OPV devices using fulleropyrrolidines as acceptor materials with P3HT, in particular, 1-(2-(2-methoxyethoxy)ethyl)-2-(2-methoxyphenyl)fulleropyrrolidine (1)5 and 1-([2,2'-bithiophen]-5-yl)-1-(2-(2-methoxyethoxy)ethyl) fulleropyrrolidine (2)6 showed higher power conversion efficiency (PCE) compared to those using [C60]-PCBM. Fulleropyrrolidines have a certain advantage over [C60]-PCBM from the standpoint of their stable nature under atmospheric conditions and the ease of producing various types of analogues. However, it was essential to use a special electrode which lacked the poly(3,4-ethylenedioxythiophene) :poly(styrenesulfonate) (PEDOT: PSS)7 layer to obtain high PCE. The role of HTL is believed to be to prevent the leak current from the active layer to the ITO electrode, thereby strongly contributing to the enhancement of the OPV performance, especially FF and Voc.8 Therefore, we investigated the interaction between the sulfonic acid group of PEDOT:PSS and nitrogen moiety of the fulleropyrrolidine to determine the reason why PEDOT:PSS caused the drop in PCE of fulleropyrrollidine based OPV devices. The study indicated that quaternary ammonium salt was formed on the interface of the active layer with PEDOT:PSS and this prevented the smooth hole transportation.6Inspired by the results, we hypothesized that a good OPV device might be produced using fulleropyrolidine derivatives if we could prevent the formation of such quarternary ammonium salt by PEDOT:PSS. We hypothesized that 2,5-diaryl-substiuted fulleropyrrolidine might become a good acceptor material because it might be difficult for the sulfonic acid group of PSS to access the nitrogen atom on the pyrrolidine ring due to enhanced steric hindrance of the N atom, and formation of quarternary ammonium salt would thus be avoided.

Here, we report that the performance of the OPV devices using 2,5-diarylfulleropyrrolidines with P3HT and an ITO electrode with the PEDOT:PSS layer significantly depend on the stereochemistry of two substituents of the pyrrolidine ring. 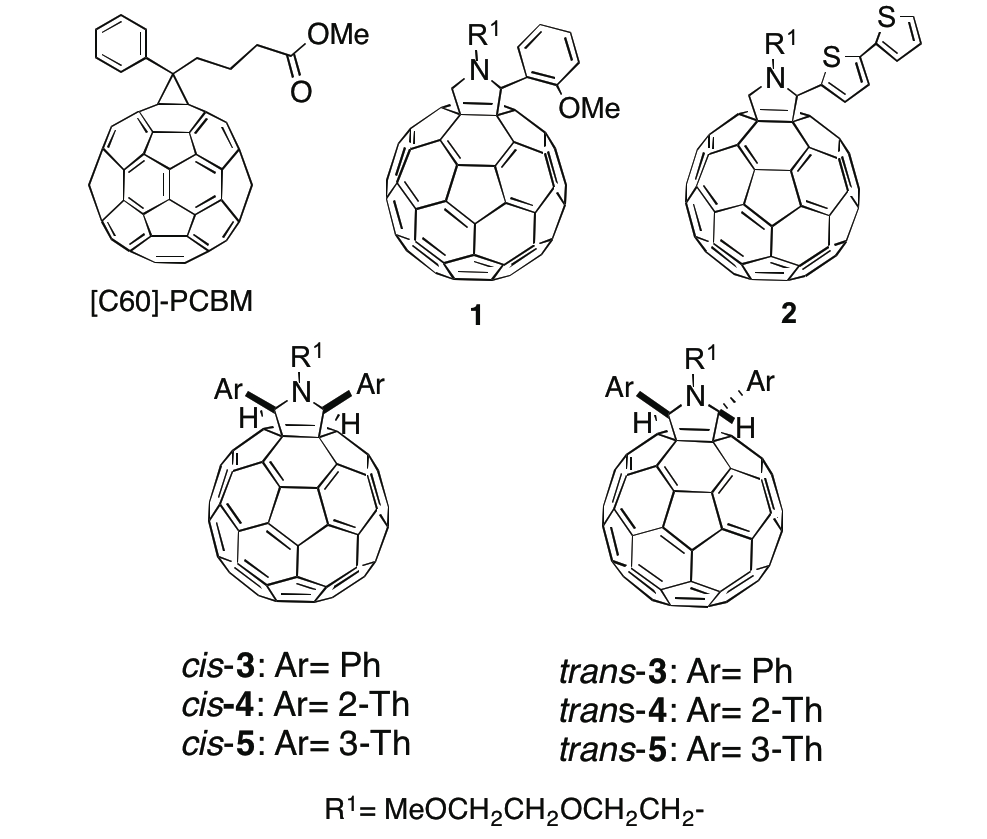