Floridian Ballroom J, Lobby Level (Hilton Orlando Bonnet Creek)
M. A. Vorotyntsev and D. V. Konev (Institute for Problems of Chemical Physics RAS)
A new method to measure both the total resistance and the specific conductivity of a thin film (for the current flow in the normal direction) is proposed [1].

It is assumed that the film has been deposited on the surface of a disc electrode (in static or rotating conditions). A relatively small diameter of the disc is preferable to ensure the maximal uniformity of the film along the surface. The thickness of the film, Lf, should be sufficiently small compared to the disc radius, ro, but it should cover the surface in a uniform manner. The conductivity properties of the deposited material may be isotropic or anisotropic (different in the normal and tangential directions).

The primary and secondary distributions of the electric potential and the current after a small-amplitude potential step have been analyzed for such a film-coated electrode in contact with an electrolyte solution, CE and RE being located sufficiently far from the disc electrode (WE). The three-dimensional (3D) character of these distributions inside the solution has been taken into account.

Analytical expressions have been derived for the overall short-time resistance of the system, Rtot, with taking into account the contributions of both the solution and the film. Due to the 3D effect this quantity for the primary distribution is not equal to the sum of the short-time resistances of these components of the system, Rs for solution and Rf for the film. Analytical formulas have been deduced, allowing one to calculate immediately the film resistance, Rf, on the basis of measured values of Rtot and Rs. Then, the specific conductivity of the film, kf, is found from relation: kf = Lf / Rf pro2.

Both parameters of the film may be determined by this method for a set of electrode potential values, see Fig.1 for a poly(titanocene-propyl-pyrrole) film.

The merits of this procedure to determine the high-frequency transport parameters are: 1) film deposition at a small surface area (but still macroscopic) substrate; 2) no lower restriction for the film thickness (except for their uniformity); 3) in situ measurements inside the conventional cell; 4) non-destructive procedure (film may be used for further texts); 5) simple data treatment; 6) weak effects of local film's imperfections, etc.

Fig. 1 Dependence of the specific conductivity of the poly(titanocene-propyl-pyrrole) film on the potential. 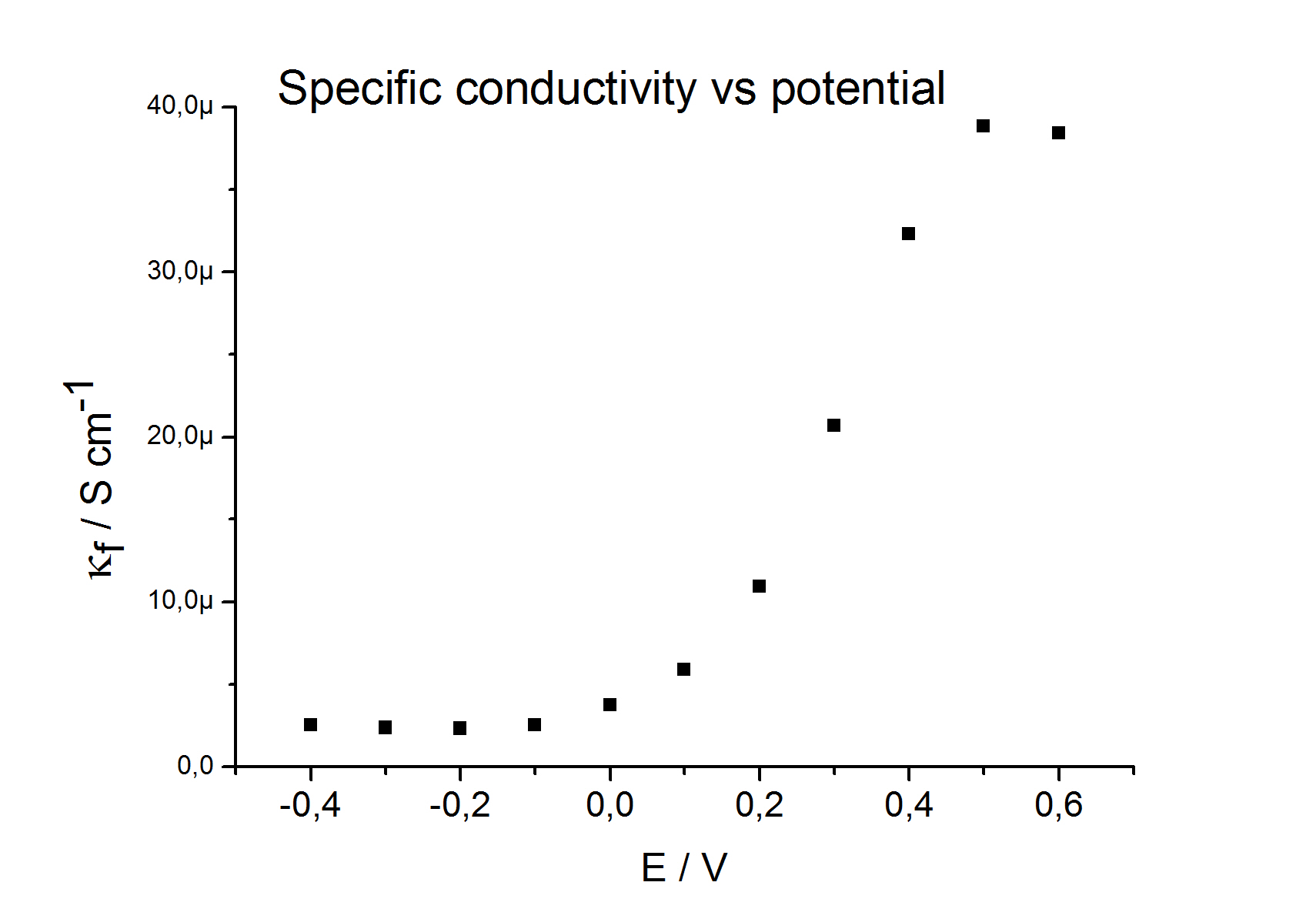