Since the most effective strategy to increase power as well as energy of an EDLC is to raise the operating voltage [3], many research efforts have been focused on the introduction of high voltage electrolytes.

Among the electrolytes proposed so far, those containing mixtures of ionic liquids (ILs) and organic electrolytes, e.g. N-butyl-N-methylpyrrolidinium bis(trifluoromethanesulfonyl)imide (PYR14TFSI) and Propylene Carbonate (PC), appear particular promising as they display low viscosity, high conductivity and electrochemical stability [4]. EDLCs containing the mixture PC-PYR14TFSI as electrolyte display high operative voltage (3.5 V) and a remarkable cycling stability [4]. It is interesting to notice that in these mixtures the IL merely acts as a conductive salt. Taking this point into account, it appears evident that the properties of the conducting salt, particularly its electrochemical stability and its solubility in the solvent, might play a crucial role for the development of high performance (and high voltage) EDLCs since they affect the physical-chemical properties of the electrolyte as well as double layer formation [5, 6,7].

In recent work, we proposed the use of a new conducting salt, N-butyl-N-methylpyrrolidinium tetrafluoroborate (PYR14BF4). We showed that the electrolyte 2.3 M PYR14BF4 in PC displays a conductivity and viscosity comparable to conventional Et4NBF4 in PC, but exhibits a much broader electrochemical stability window, which makes the realization of EDLCs with an operative voltage of 3.2 V possible [8].

In this work we reports an extended study of the use of PYR14BF4 among other compounds as conductive salts in EDLC electrolytes.

We found that several of the electrolyte’s electrochemical properties - especially the electrochemical stability – are influenced by the choice of salt. The use of PYR14BF4 as conductive salt results in higher operative voltages and thus higher values for energy and power compared to conventional EDLC systems. 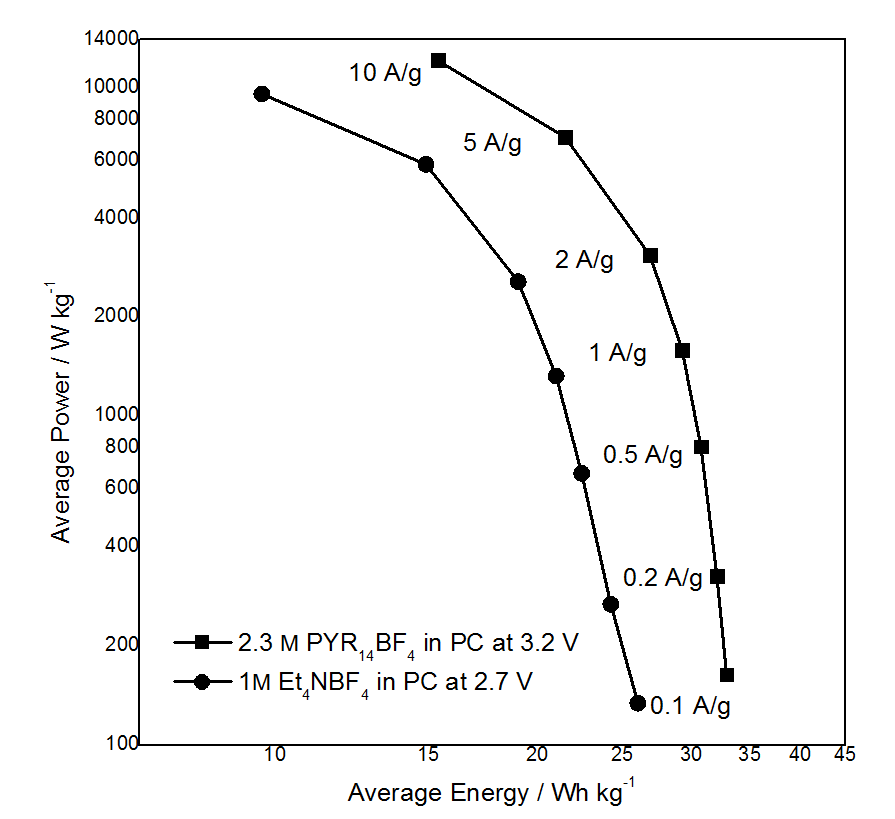