In lithium-sulfur batteries, small S2-4 molecules show very different electrochemical responses from the traditional S8 material. Hitherto, their exact lithiation/delitiation mechanism is not clear, and how to select proper electrolytes for the S2-4 cathodes is also ambiguous. In this work, S2-4 and S8/S2-4 composites with highly ordered microporous carbon (MicroC) as confining matrix are fabricated, and the electrode mechanism of the S2-4 cathode is investigated by comparing the electrochemical performances of the S2-4 and S2-4/S8 electrodes in various electrolytes combined with theoretical calculation. Experimental results show that the electrolyte and microstructure of carbon matrix play important roles in the electrochemical performance. If the micropores of carbon are small enough to prevent the penetration of the solvent molecules, the lithiation/delithiation for S2-4 will occur as a solid-solid process. Both the irreversible chemically reactions between the polysulfudes and carbonates, and the dissolution of the polysulfides into the ethers can be effectively avoided due to the steric hindrance. Under this condition, the confined S2-4show high adaptability to the electrolytes. The sulfur cathode based on this strategy exhibits excellent rate capability and cycling stability.

Fig. 1 shows the SEM images of MicroC/S-60 and MicroC/S-40. It can be seen that a certain amount of element sulfur adheres on the surface of the carbon particles in the MicroC/S-60 sample (Fig. 1a), while for MicroC/S-40, the composite particles almost have the same shape with the pure MicroC particles, and no extra sulfur is observed (Fig. 1b). In Fig. 1c and d, TEM images of MicroC/S-40 show that, when composed with sulfur, the carbon matrix still maintains the original porous structure.

Theoretical calculation brings some new insights into the sulfur electrode process in a nanometer scale. Fig. 3 displays the schematic of the lithiation process in MicroC/S cathode. The diameters of the solvent molecules are calculated larger than the size of the micropores of the MicroC (~ 0.46 nm). Thus, the micropores of MicroC, which confines the small S2-4 molecules and the polysulfides formed during the charge-discharge process, prevents the penetration of carbonate molecules. The irreversible reactions between the carbonates and the confined polysulfides can be avoided due to the physical barrier (Fig. 3). Accordingly, the lithiation/delithiation for S2-4occurs as a solid-solid process whether in the ether-based electrolyte or the carbonate-based electrolyte. 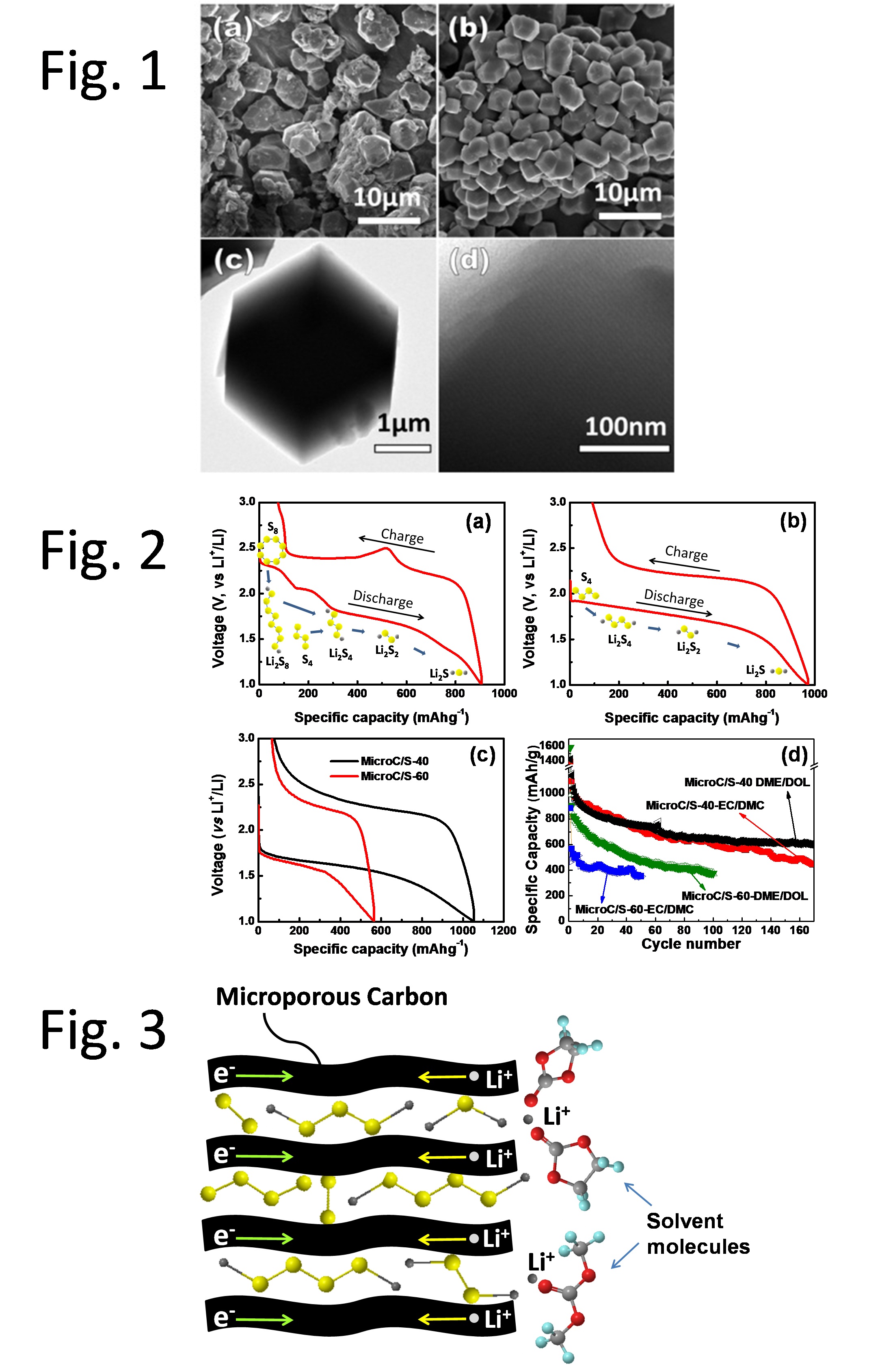