One of the challenging issues in conversion reaction of a bulk electrode material is to maintain structural integrity during electrochemical cycling with associated issues such as volume changes, pulverization, etc., which affect the performance.2Congruently, through nanostructured materials such as nanoparticles, nanocubes, nanorods, nanotubes and nanoflowers, we may facilitate an increase in the electrochemical performance due to short diffusion length for Li-ion and electronic transport. Among these, porous materials have been studied widely because of the easy percolation of electrolyte into core of particles which result in high rate capability. Porous materials can also sustain mechanical stress generated by volume expansion/contraction during the electrochemical cycling.

In the present work, we report synthesis of iron alkoxide precursors using  4.4 mmol FeCl3.6H20, 90 mmol urea and 124 mmol tetra butyl ammonium bromide are added to 180 ml of ethylene glycol in 250 ml round bottomed flask, stirred for 10 min to get homogeneous solution and refluxed at 195 oC for 30 min. The obtained green precipitate of iron alkoxide is washed with ethanol and dried at 60 oC for 12 h. The resultant dried powder is calcined at a range of temperatures from 300 to 500 oC for 3 h in air.3 A porous flower-like nanostructured α-Fe2O3 is obtained by subsequent calcination of iron alkoxide precursor. The phase purity and morphology of the final product (α-Fe2O3) are studied by XRD, SEM and TEM analysis. The microscopic images show (Fig. 1) a flower-like morphology. The BET surface area and its pore size of the α-Fe2O3 are measured and they are 64 m2 g-1 and 6 nm, respectively. The α-Fe2O3 powder is subjected to galvanostatic charge/discharge experiments between 0.01 and 3.0 V versus Li/Li+. The charge-discharge profile is shown in Fig. 2. The discharge capacities obtained for 1st, 10th and 20th cycle are of 1058, 1044 and 917 mAh g-1 respectively for the sample prepared at 300 oC. These values are greater than the values reported so far on α-Fe2O3. Porous nature of α-Fe2O3 prepared in the present study is responsible for high discharge capacity and also high rate capability. Results of these studies including both physical and electrochemical investigations will be presented. 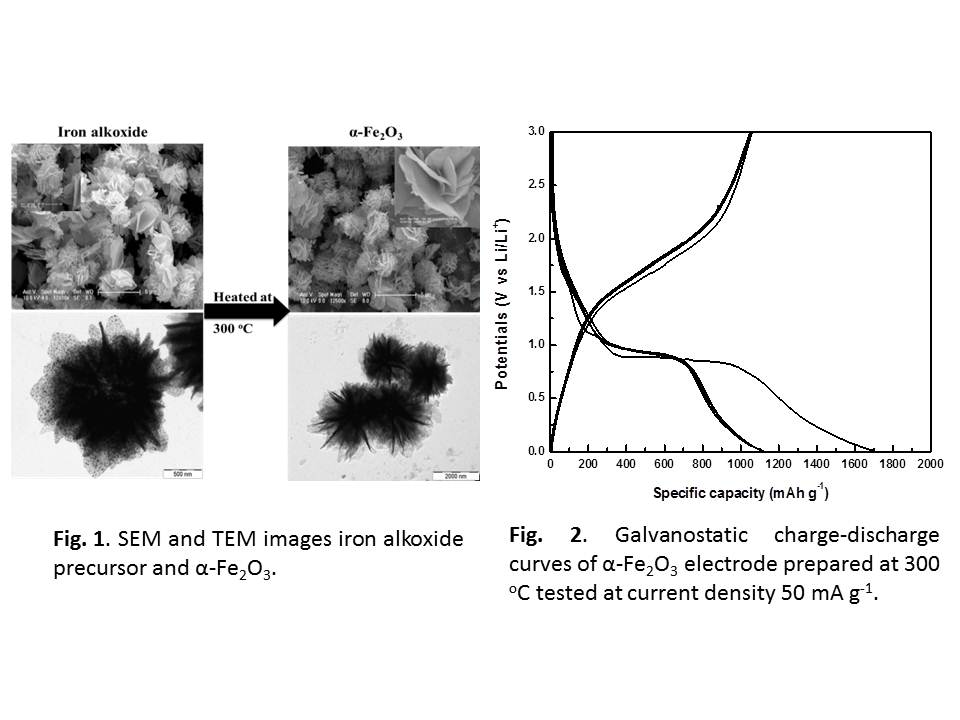