Polymer electrolyte fuel cells (PEFCs) are a promising power sources for automotive use. For the commercialization, cost reduction is one of the most important issues. In order to reduce cost, the Pt-loading of a membrane electrode assembly (MAE) should be reduced. Many studies for this purpose have been done. As a part of such studies, in-situ analytical methods for evaluating oxygen transport properties have been developed using limiting current measurements1)2). It is said that oxygen gas transport resistance in catalyst layers CLs (RCL) is mainly consisted of two parts, diffusion resistance in micro pore (Rpore) and diffusion resistance around Pt particles (RPt).  And it has been found   that the diffusion resistance RCL was significantly increased when Pt loading in CLs was reduced2). In this study, the oxygen diffusion resistances in CLs of two types of Pt/carbon catalysts with different kind of carbon support are measured by changing the ionomer carbon ratio (I/C) and the relation between I/C and RPt, Rporewas investigated.

Table 1 shows the specifications of the MEAs used in this study. The MEA samples with an active area of 1cm2 were fabricated by coating CLs consisting of catalysis powders (Pt/C) and NafionR  ionomer onto the perfluorosulfonated polymer membrane (NafionR NR212). Pt-loadings of the samples for the working electrode were 0.05 -0.6 mg cm-2 respectively. In order to evaluate the oxygen gas transport resistance in the CLs, limiting currents were measured in nitrogen balance gases. RCL was measured by the method of Mashio et al1). Rpore and RPt were determined by the method we described before3).

In order to estimate Rpore and RPt,  an Equation  (1) was introduced with the analogy of porous electrode model and value was determined from RCL with different I/C.    A imaginary limiting current inversely proportional to RCL was also introduced (eq.(2)).   In Fig.1, each dot shows measured RCL, full line shows the calculation curves of RCL with eq.(1) and dotted line shows imaginary limiting  current calculated by the eq.(2) with using the obtained values of Rpt and Rpore.  Table2 shows Rpt and Rporevalues obtained.

Rpore increased very much at I/C was 1.3 for both catalysts.This seems to be cause of the closure or isoration of pore by ionomer.RPt shows minimum values at some I/C which depend on catalyst types. From this result, RPt seems to be affected with the state of three-phase interface4)and oxygen gas permeability through ionomer.

This research was performed under a grant from the Cell Evaluation Project of the New Energy and Industrial Technology Development Organization (NEDO). 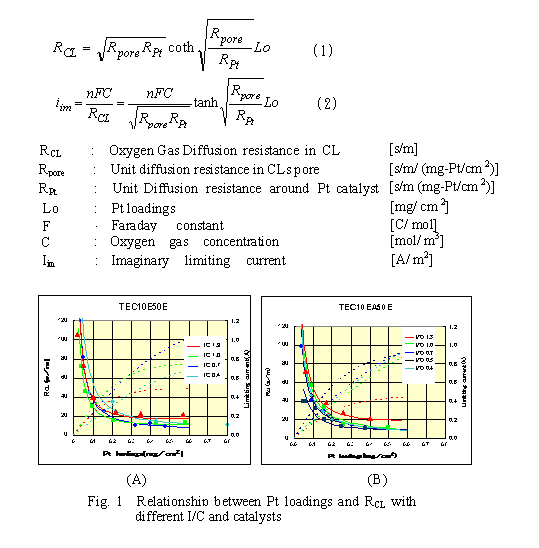