In an open cathode or self-breathing fuel cell, supply of oxygen to the cathode is achieved through free or natural convection of air-flow. The output power densities of these type of fuel cells are typically low when compared with forced convection fuel cells [2]. However, they are still considered attractive options for portable application due to other key advantages over forced convection designs, such as simplicity of natural convection air delivery, lower cost, less noise and no pumps required.   The cathode performance is usually the major source of voltage loss as a result of natural convection of air which can lead to mass transport limitations (Fig 1) and inadequate water removal.

This work explores the use of advanced diagnostic techniques to understand the internal working of a novel self-breathing polymer electrolyte fuel cell. This includes the use of a thermal imaging camera to observe the production and distribution of heat (Fig 2 ) and direct visualization of open channels to observe water formation. The PEMFC fabricated  consisted of two printed circuit board (PCB) current collectors (anode and cathode), an MEA, gaskets and two end plates. The PCB current collectors were were coated with conductive carbon ink for corrosion protection. The flow fields were machined onto the PCBs using a CNC milling machine. The gaskets used for gas manifolds were made of silicone. The cathode end plates were made from aluminium sheets and contained a 13cm2 window for direct visualization of the flow field. A double serpentine flow field was used for the anode. The cathode geometries employed were parallel and circular openings. The two  cathode geometries employed will be compared using polarization curve and impedance spectrscopy.

Polarization perfomance of the open cathode fuel cells have indicated mass transport limitation as the dominant source of voltage loss. The circular opening geometry also performs better than the parallel opening geomerty at the ohmic region of the curve but performance drops in the mass transport region. The impedance spectra obtained also points at severe mass transport issues especially with the circular openings. This is as a result of water bubbles blocking the path of air flow. Thermal imaging results indicates the existence of hotspots which is very important as the membrane could fail if the hotspot exceeds its maximum design limitation. The work presented will be of interest to both academic and industrial personell as it gives an indication of the stable operating points of air breathing fuel cell and also provides potential water management strategies. 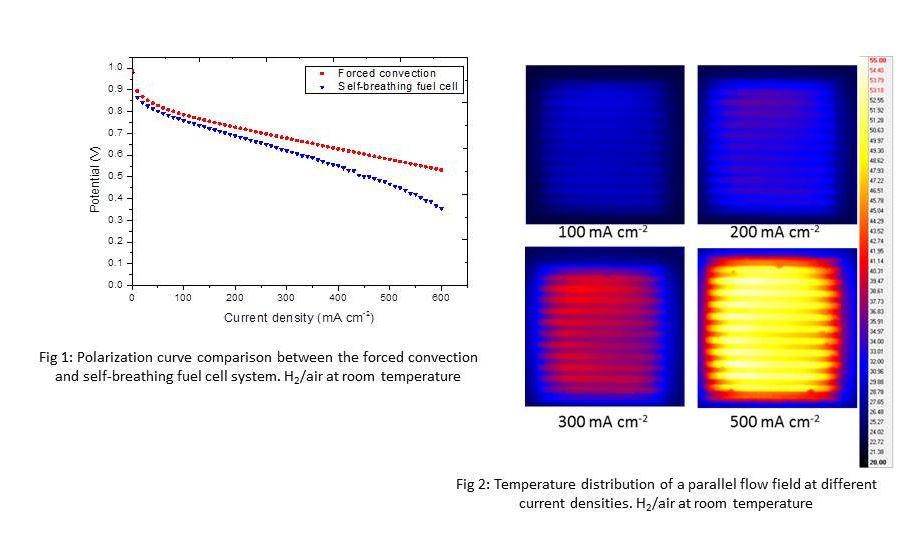