In order to make further improvements to the key performance metrics, it is important that we know as much as possible about the way the fuel cell is working in space and time. Electrochemical impedance spectroscopy (EIS) is a powerful in situ diagnostic technique for monitoring fuel cell performance; however, its use is limited to steady state conditions and typically requires costly hardware.

This system was used to distinguish the causes of the voltage loss in dead ended anode conditions. A novel reconstructive impedance strategy was developed. The same frequency of interest was measured every 20 seconds in through-flow and dead-ended conditions. The events were repeated, but changing the frequency of interest (1 kHz to 1 Hz) at each repeat. It was found possible to associate Nyquist plots with different stages of the voltage loss over time (Fig 1 a). These results (Fig 1 b) highlight an increase of the resistance in the low frequency region during dead-ended operation, an indication of flooding. Thus the reconstructive impedance technique enables the study of dynamic processes, unsuitable for investigation using steady-state EIS.

Fig. 2. Evolution of the voltage losses (a) and nitrogen accumulation (b) from 0.4 to 1 A cm-2in dead ended anode.

In addition, a 16-segment S++ plate, capable of current, temperature and impedance mapping enabled to move from global to localized in situ measurements. The local and temporal evolution of the ohmic resistance, current density and temperature was studied as the current density was increased in order to provide more information on the process described Fig.2. Also, the heat distribution profile, obtained simultaneously from the S++plate and the thermal imaging camera provided a grid of the temperature distribution inside the stack and at its edges. 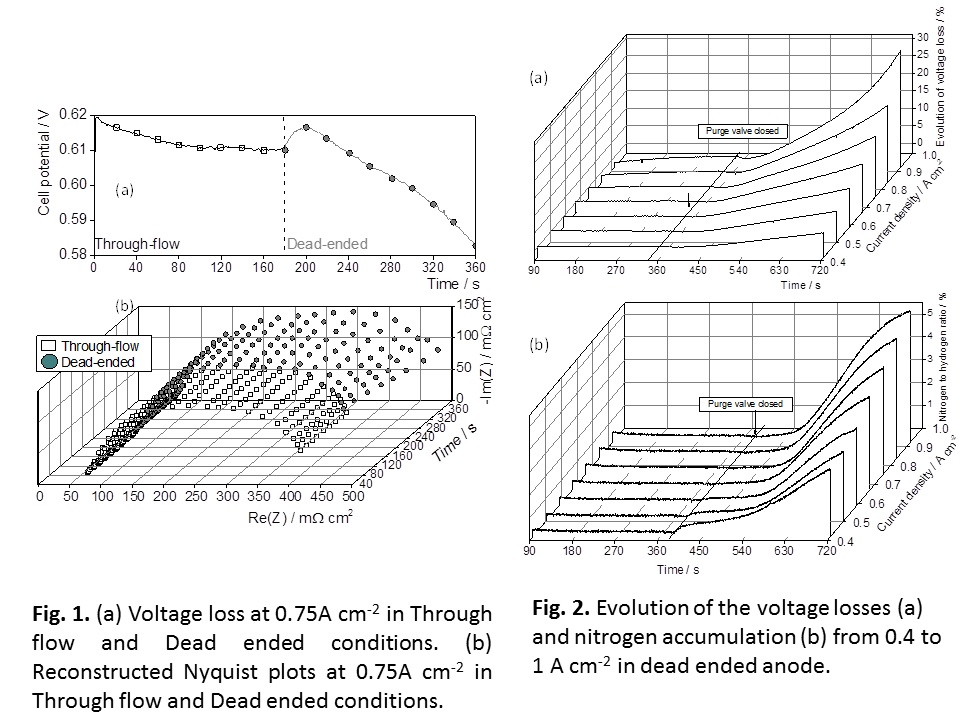