959
Interplay Between Surface and Morphology: Bio-Nano-Composites for Energy Harvesting

Characterizing the interface between immobilized biomolecules and a transducer is crucial for understanding spatial distribution and ordered orientation of biocatalysts. X-ray Photoelectron Spectroscopy (XPS) is a powerful technique allowing estimation of the elemental and chemical composition of the upper 10 nm of a surface and has been demonstrated to be a powerful tool to quantify the amount of protein immobilized or adsorbed during enzyme immobilization.

In multicomponent heterogeneous functional systems related to this discussion, one has to be able to differentiate between multiple enzymes, between enzyme and other organic based constituents of composites, such as electrodes, polymers, etc., and to determine interactions between constituents in the composite, such as hydrogen bonding.

Despite challenges, we are showing that XPS is a powerful analytical method for characterization of bio-inorganic and bio-organic composite multicomponent materials. Through carefully designed experiments, involving selection of reference materials that constitute part of the composite and individual relevant mixtures of those, constraining curve fits using information obtained from the references and cross-correlation between elemental speciation, it is possible to distinguish between chemically similar biological compounds in the matrix of organic or inorganic materials. Formation of intermolecular secondary bonds between proteins/peptide and inorganic matrix, structure of layered systems are types of analytical problems that XPS can address when enough care is taken.[1]

The structure of ultrathin BOD film immobilized by LbL approach including elemental and chemical composition of layer-by layer assembly and relative thickness of adsorbed layers was studied by Angle-resolved XPS (ARXPS). The high resolution C 1s spectrum of the GA treated carbon electrode (CE), pure PEI and BOD, and 2L layer-by-layer samples are presented in Figure 1. A pure BOD has a unique peak at 288.5 eV in the C 1s high-resolution spectrum due to the presence of COOH/N-C=O types of species. A unique peak at 287.5 eV is observed for CE+PEI sample.

Unique peaks within C 1s XPS spectra for each component of layer-by-layer assemblies can be used to distinguish individual layers on the electrode surface between each other. Angle-resolved XPS is used to follow ultrathin layer-by-layer formation. The layers are not discrete, but rather some intermixing occurs. The change in thickness of BOD/PEI bi-layer determined through the overlayer model confirmed collapse of order in the system for layers larger than 2.

In addition to chemical composition, the morphology of the components involved in the functional energy harvesting devices, such as supports, catalysts, membranes, electrode, GDLs, etc. is critically important for the function of the relevant components.

Approaches in extracting morphological information out of SEM images at a variety of scales will be discussed. Figure 2 shows the approach in multi-step filtering of SEM images to obtain roughness and porosity measures representing different scales. [2]

Effect of morphology on current density of modified PTFE electrodes is displayed in Figure 3. The more of large pores is present the smaller the resistance and the higher the current density.

Structure-to-property relationship between surface composition as extracted by XPS, morphological information as provided by SEM and performance characteristics, such as, for example, electrochemical performance and bacteria attachment, allows for accelerated targeted material design. 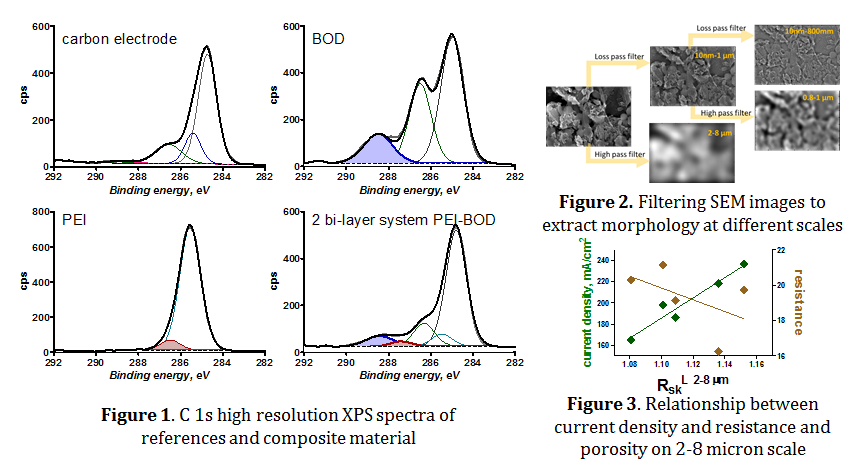