Floridian Ballroom H, Lobby Level (Hilton Orlando Bonnet Creek)
Y. L. S. Tse (University of Chicago), H. N. Sarode (Colorado School of Mines), G. E. Lindberg (Department of Chemistry, James Franck Institute, and Computation Institute, University of Chicago), T. Witten (University of Chicago), Y. Yang (Department of Chemistry and Geochemistry, Colorado School of Mines), A. M. Herring (Colorado School of Mines), and G. Voth (University of Chicago)
Anion exchange membrane (AEM) fuel cells are a promising candidate to become the next-generation fuel cells. One of the most important advantages of AEM fuel cells is that they can utilize non-noble metals catalysts, because the oxygen reduction reaction is more facile in an alkaline fuel cell environment.1 Furthermore, a variety of more complex fuels can be used in these AEM fuel cells and generate high power densities at moderate operating temperatures.2 The study of ion transport in a charged polymer swollen with water is challenging, however. Transport is hindered by steric blockades, Coulombic barriers, and tortuous pathways. Molecular dynamics (MD) simulations can give insight into the nature of ion transport and suggest possible synthetic means to improve transport.

Poly(vinyl benzyltrimethyl ammonium), PVBTMA, membranes have shown promising anionic conductivity. Furthermore, the benzyltrimethyl ammonium (BTMA) cations are stable in an alkaline environment, and do not suffer from Hofmann elimination because there are no b-hydrogen atoms.3,4 Because of these advantages, one of the main goals in this study was to understand ion transport in PVBTMA. To directly compare with experiments, we studied fluoride ions (19F−) as the diffusing species, because its diffusivity can be readily probed by pulsed-field gradient spin-echo NMR experiments and it can be reasonably modeled by classical force fields in MD simulations.

However, one complication arose when we compared the experimental data with simulations. It turned out that the binding between the ammonium cation and the chloride ions, the natural counterions left in the syntheses, is so strong that 100% exchange with fluoride could not be accomplished experimentally. This motivated us to study how chloride can affect fluoride mobility. To our surprise, at 300 K, we found in simulations that the self-diffusion constant of fluoride increases by 60% when fluoride content decreases from 100% to 40% (and 60% chloride), and it increases by 130% when fluoride content is down to 10% (see Figure 1). We hypothesize the root cause of this enhancement effect is due to the lower surface electric field of the chloride ion than that of the fluoride ion. As a chloride approaches a cation, it loses its water solvation shells more easily, and more freed water becomes available for ion transport. The net effect is that the mobility of fluoride is facilitated. This effect is likely more general than just the fluoride/chloride case reported here.

Funding for this project was provided by the Army Research Office for the Multidisciplinary University Research Initiative (MURI) under contract W911NF-10-1-0520. 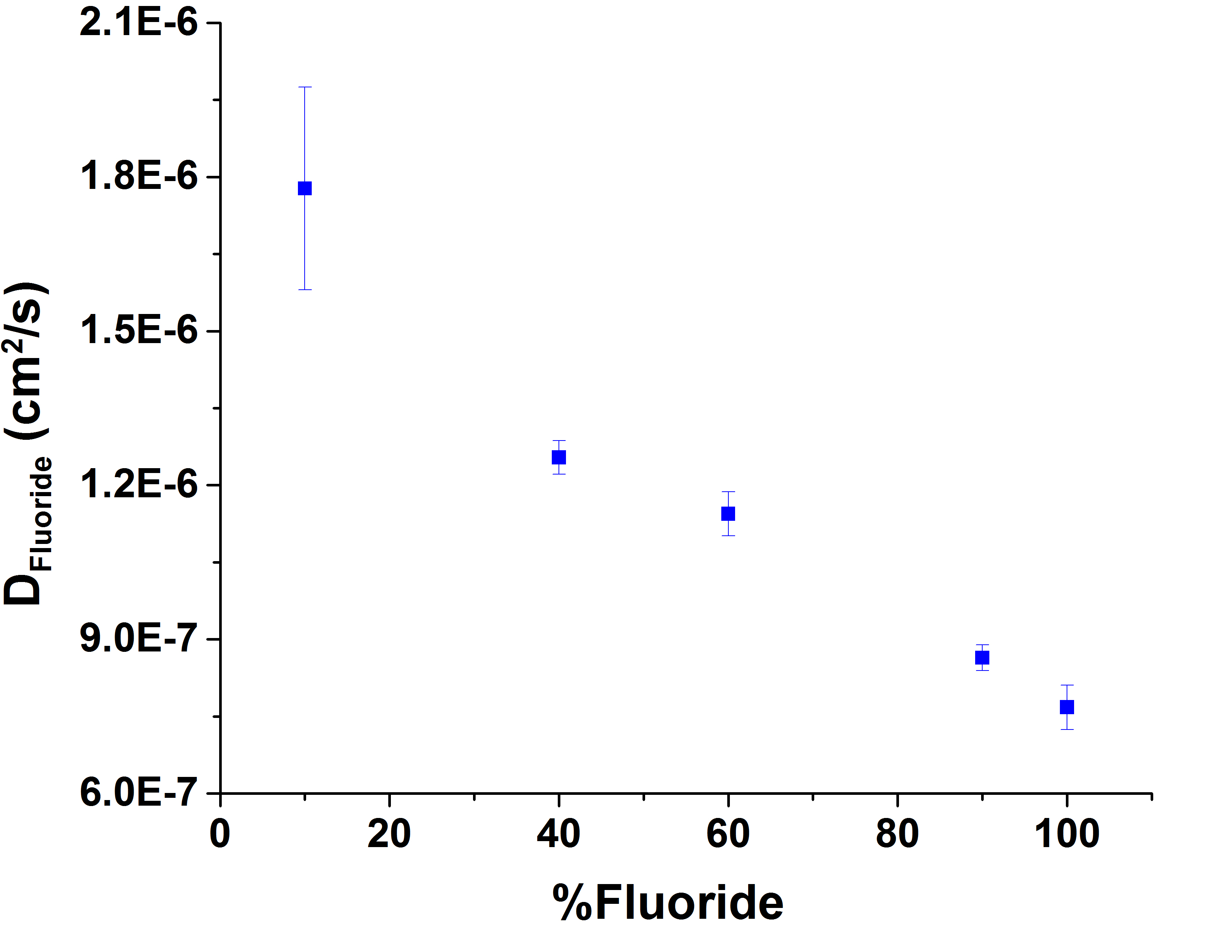