Floridian Ballroom G, Lobby Level (Hilton Orlando Bonnet Creek)
S. Babanova (University of New Mexico, Center for Emerging Energy Technologies), I. Matanovic, R. Tufaro, and P. Atanassov (University of New Mexico)
Enzymatic fuel cells (EFC) are one of the oldest “untraditional” fuel cells that have been developed and they are still an avenue of significant part of the research activities. The main application of EFC is the design of biosensors due to the specific and very high turn over rate of organic substrates by enzymes. The biggest hindrance in EFC operation is the interface interaction between the enzyme and the electrodes surface. Different approaches have been used to overcome it: i) use of mediators to facilitate and enhance the electron transfer rate; ii) utilization of carbon materials having a diameter comparable to the enzyme size; iii) covalent attachment of enzymes to the electrode surface to ensure the interactions between them and increase stability; iv) efficient enzyme orientation, etc. All of these approaches proved to be successful.

Our earlier activities in the area of biofuel cells demonstrated the importance of the proper enzyme orientation towards efficient electron transfer from the enzyme to the electrode surface and thus increased biofuel cells performance. It was established that the subsequent utilization of tethering and orienting agents, providing stable enzyme immobilization and effective enzyme orientation, lead to significant enhancement of the generated current densities of bilirubin oxidase-based oxygen reducing cathode [1]. Therefore in this study the same approach was explored for the development of oriented enzyme based three-dimensional nanocomposites for anode application in enzymatic biofuel cells.

For the design of the enzymatic anode pyrroloquinoline quinone (PQQ) dependent enzymes were explored as our team has been previously demonstrated [2,3]. PQQ-glucose dehydrogenases are ideal enzymes for anode development of biofuel cell especially for sensing applications, due to their oxygen insensitivity and high catalytic activity. However, the application of those enzymes is inherently limited because of the low efficiency of the electron transfer from the enzyme towards the anode. Therefore our efforts were associated with the study and enhancement of the enzyme/electrode interactions by the utilization of “orienting agent” that also plays the role of mediators.

The critical hypothesis for orienting PQQ-dependent enzymes is to use their natural electron acceptor (ubiquinone) or its substitutes as orientation agent. The anode surface, composed of carbon nanotubes, was modified with the subsequent utilization of tethering and orienting agent. As orienting agents we explored ubiquinone, catechol, 1,4-benzoquinone and other quinones with specifically designed structure. The selection of the proper quinones was done on the base of Density Functional Theory (DFT) calculations. Using DFT the adsorption energy and theoretical redox potential of different quinones were determined (Fig. 2 and Table 1) and the proper ones were further explored in real electrochemical studies (Fig. 3).

A 6-times increase in the anode performance was recorded in presence of catechol used as orienting agent. At the same time due to the electrochemical activity of catechol we assume that it acts as a mediator and thus facilitates the electron transfer mechanism.

Due to the fundamental principle behind the approach demonstrated herein, it could be successfully applied for other oxidizing enzymes used at the anode in enzymatic biofuel cells and enhance the enzyme-electrode interface interactions in bioanodes. 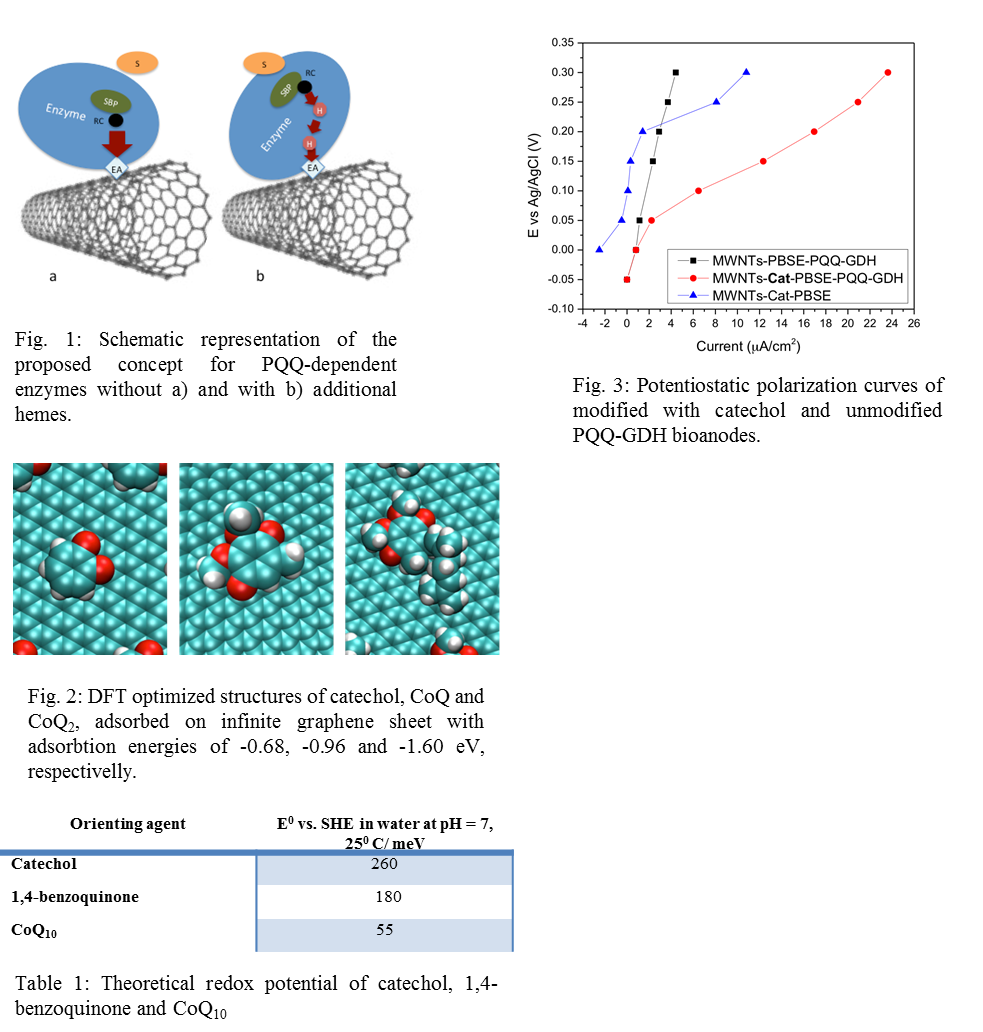