Hamilton, Ground Level (Hilton Orlando Bonnet Creek)
S. Y. Lai, M. Gong, M. Liu, M. Liu, and F. M. Alamgir (School of Materials Science and Engineering, Georgia Institute of Technology)
One of the key obstacles to widespread commercialization of solid oxide fuel cell (SOFC) systems is their susceptibility to contaminants in the fuel stream. Hydrogen sulfide has been observed to reduce the performance of state-of-the-art commercial SOFC anode/electrolyte composites by deactivating the Ni catalyst. A novel anode/electrolyte composite, consisting of Ni as the anode and BaZr0.1Ce0.7Y0.1Yb0.1O3±δ (BZCYYb) as the electrolyte, has been developed and shows promising tolerance to hydrogen sulfide. However, the mechanism of tolerance is not well understood, although the surface of the anode and the interface between Ni and BZCYYb are believed to be the key area of interest. The purpose of this study is to investigate how the BZCYYb electrolyte modifies the anode, creating new particles and interfaces on the Ni surface. The current hypothesis is that the high temperature synthesis process volatilizes BZCYYb, which then deposits onto the Ni surface as a distribution of discrete particles, creating interfaces that do not suffer from sulfur exposure.

Quantitative microscopy was employed to study how modified Ni interfaces developed when the Ni and BZCYYb were co-fired. Nickel oxide powder prepared by the glycine-nitrate process and BZCYYb prepared by the citric acid method were pelletized and co-fired in two configurations, direct contact and gas separated. For direct contact, the NiO pellet was placed on top of the BZCYYb pellet. In the gas separated configuration, the BZCYYb pellet was placed within an alumina crucible and an oversized NiO pellet capped the crucible, with a small volume separating the two pellets. Characterization of the microstructure through SEM estimated that the gas separated configuration contained almost twice the volume fraction and surface area per unit volume of deposited particles. Also the mean free path between particles was significantly less, meaning the particles were more evenly distributed in the gas separated configuration.

X-ray photoelectron spectroscopy only detected Ba and Ce were in appreciable concentrations on the Ni surface. Quantitative analysis revealed that the stoichiometry also varied from the original BZCYYb, suggesting that certain rare-earth dopants are more favorable for transport during high temperature processing.

X-ray absorption near-edge spectroscopy (XANES) was used to study the oxidation state and electronic structure of the multiple elements in the composite NiO-BZCYYb anode before and after sulfur exposure. Ex situ tests indicate that the Ni in the as-prepared composite anode is reduced to a metallic state after exposure to 50 ppm of H2S in H2 at 700°C for 1 h and did not show any effects of sulfidation of the Ni. Compositing the BZCYYb with NiO resulted in a slight oxidation of Y but the exposure to H2S showed little influence on the Y in both pure and composited BZCYYb. However, the Ba cation’s oxidative response to the H2S exposure is dependent on the presence of Ni. Sulfur K-edge XANES confirms that sulfur phases deposit on the anode but multiple phases of S are present. In situ XANES experiments on model Ni electrodes in BZCYYb showed signs that the Yb may also be oxidizing at high temperature when exposed to H2S.

In summary, a variety of characterization techniques can be employed to study the formation of interfaces between a base anode material and surface catalyst that enables sulfur tolerance. The combination of in situ and ex situ spectroscopy with electrochemical data provides insight into understanding sulfur tolerance mechanisms. Quantitative microscopy is essential to understanding how processing can dramatically affect the development of the resulting interfaces, which are central to a solid oxide fuel cell’s operating performance. Ultimately, these techniques serve to rationally inform the direction for synthesizing novel materials. 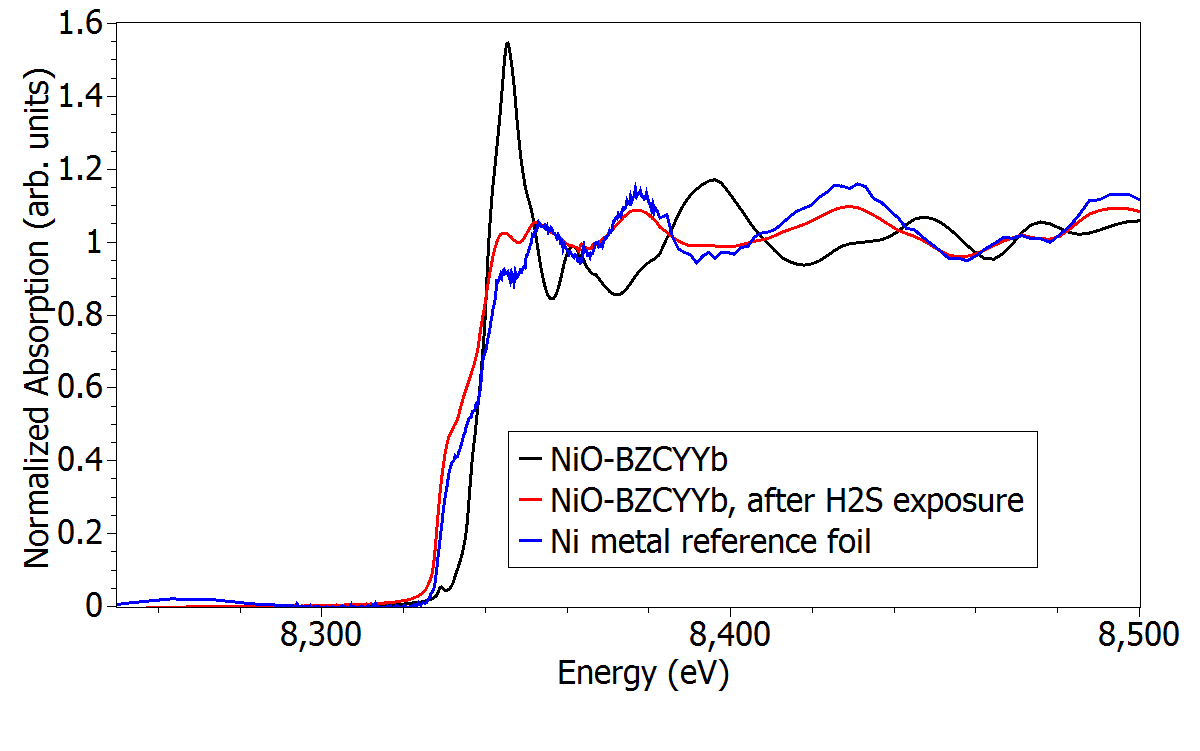