The as-prepared powder was calcined between 500 and 900 °C, with dwell time from 2 to 4h. Phase formation of powders was determined by X-ray diffraction. The pure apatite powder was further analyzed by scanning electron microscopy (SEM). The sintering behaviour was studied by dilatometry in the temperature range of 30-1500 °C. The effects of the sintering temperature, ranging from 1350 to 1550 °C, on the microstructure and electrical properties were investigated by SEM and impedance spectroscopy. Ionic conductivity properties were measured in the 200 – 800 °C temperature range in air atmosphere.

Structure of the calcined powders, characterized by X-ray diffraction (XRD) and Rietveld refinement, indicated the formation of single – phase crystalline lanthanum silicate at 900 °C. Fig. 1 shows a representative impedance spectrum for the La10Si6O27 pellet sintered at 1400 °C and measured at 600 ºC in air. The features in this plot can be attributed to contributions of grain boundary at intermediate frequency and electrode polarization at low frequency. Fig. 2 shows the calculated total electrical conductivities, for the pellets sintered at 1400 and 1450 °C, as a function of temperature following the Arrhenius law. The lanthanum silicate electrolyte sintered at 1450 °C exhibited electrical properties comparable with samples prepared by solid state reaction and sintered at 1600 °C [1].

The findings in this study are an indication for the potential of an innovative chemical route, based on a combination between sol-gel and co-precipitation methods, for the synthesis of lanthanum silicate powders with apatite-type structure. Nanoparticles were obtained even after calcination at temperatures as high as 900 °C. Densities above 90% of the theoretical one were achieved after sintering at 1450 °C. The total electrical conductivity at 600 °C was comparable with the best values reported in the literature. The lower activation energy of total conductivity was 80 kJ/mol.

The authors acknowledge CAPES and FCT (Portugal) for the financial support. 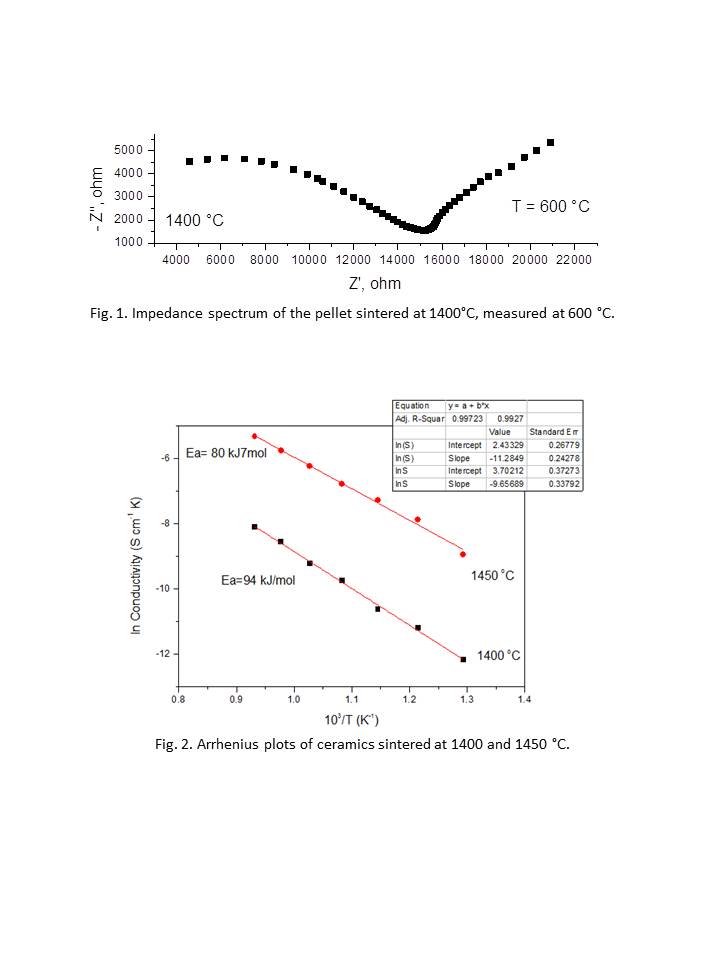