Bonnet Creek Ballroom I, Lobby Level (Hilton Orlando Bonnet Creek)
M. D. Tikekar, L. A. Archer, and D. L. Koch (Cornell University)
Lithium metal batteries have reliability issues due to formation of dendrites during the recharge cycle. These dendrites grow due to electrodeposition of lithium on their tips and eventually short the battery internally. An analysis by Chazalviel [1]showed that the cause lay in the migration of anions away from the cathode leading to the formation of large electric fields in its vicinity. The electric field lines converge on dendrite tips leading to preferential deposition on the tips and dendrite growth.

We propose a structured electrolyte with a fraction of the anions tethered in place to a solid matrix to prevent their migration away from the cathode (Fig 1). This is expected to modify the transport within the battery and increase the stability of electrodeposition. The fraction of fixed anions is considered as a parameter in our analysis. We model the electrolyte with diffusion-migration equations for the cation and the mobile anion for varying current densities. Solving the governing equations with appropriate boundary conditions shows that two regimes of transport are present depending on the current passing through the cell. At low current densities, the transport is governed almost entirely by diffusion of the mobile ions. At higher current densities, the mobile anions pile up against the anode and are depleted at the cathode leading to the formation of a zone possessing only the fixed anions and the concentration of cations required to balance their charge. This electromigration dominated region grows with increasing current density and facilitates the passage of currents beyond the diffusion limit. It ensures that the conductivity remains finite throughout the electrolyte and reduces the electric field at the cathode (Fig 2).

We further perform a stability analysis of the electrodeposition incorporating the effect of surface tension as a stabilizing agent. Surface tension alters the chemical equilibrium at the cathode to slow the reaction at the crests and accelerate it at the troughs. The stability analysis is performed in both the high and low current density regimes. For the high current density regime, we consider a two-region model wherein part of the inter-electrode spacing has diffusion-dominated transport while the remainder has migration-dominated transport. In the low current density regime, diffusion is the only mode of transport in the electrolyte. Two parameters are extracted from the analysis, viz. the critical wavenumber of perturbations at which transport is rendered stable by surface tension and the growth rate of the most unstable perturbation mode (Fig 3) as metrics of the stability of electrodeposition.

The stability analysis shows that both the critical wavenumber and the growth rate of the most unstable mode can be reduced by tethering anions, thereby increasing the range of stable wavenumbers. Even a moderate amount of tethered anions as small as 10% is effective in stabilizing the electrodeposition at high currents. At low currents, however, the effect is less dramatic. For higher fractions of tethered anions, approaching the limit of single ion conductors, the findings show that the factors affecting dendrite growth are much more mitigated than conventional salt-based electrolytes. However, the proposed electrolyte does not completely stop dendrite growth. 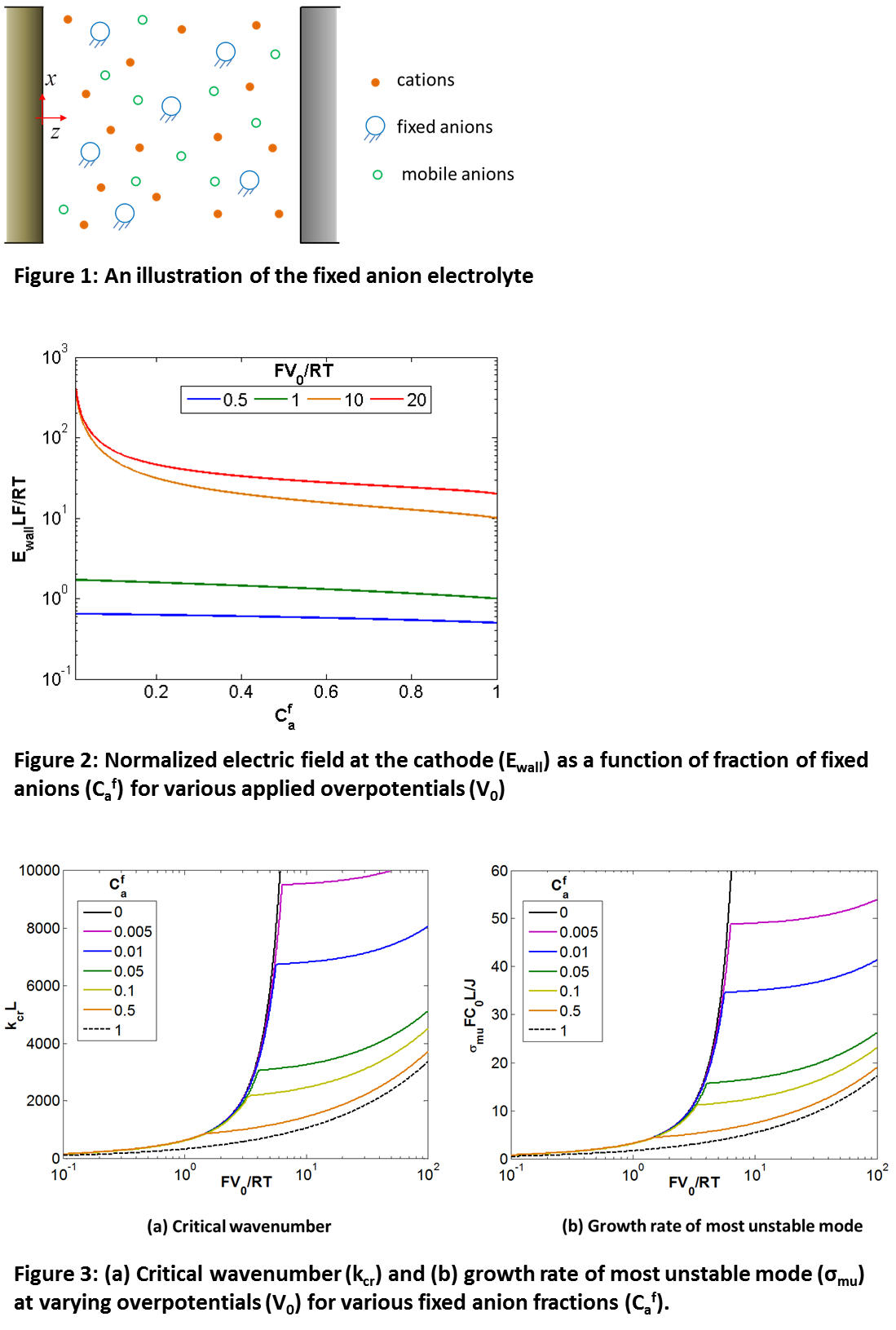