Bonnet Creek Ballroom III, Lobby Level (Hilton Orlando Bonnet Creek)
A. Shellikeri (Aero-Propulsion, Mechatronics and Energy Center, Florida State University, Tallahassee, FL 32310, Department of Electrical and Computer Engineering, Florida A&M University-Florida State University Tallahassee), I. Hung, Z. Gan (National High Magnetic Field Laboratory, Tallahassee, FL 32310), and J. P. Zheng (Florida A&M University, Florida State University)
The demand for more advanced energy storage devices is growing with every passing day and has become a socio-economic priority. In-keeping with this, a novel energy storage device ‘lithium-ion capacitor’ has been developed1 which consists of Li-intercalation graphite (hard carbon) with stabilized lithium metal powder (SLMP) applied on surface of anode and a double-layer capacitor type activated carbon cathode. It is different from conventional double-layer capacitors since here the electrolyte is not consumed during discharge/ charge cycling and it can achieve much higher specific energy (82 Wh Kg-1), which makes it an ideal candidate for electric vehicle (EV) applications. However, there is a need to understand the various electrochemical processes occurring inside the sandwich structure of the capacitor at various stages of cycling. Understanding the formation mechanism of the passivation layer of solid electrolyte interface (SEI), lithium metal usage over multiple cycles, the nature of lithium insertion/ extraction in the graphite structure and other processes is a necessity. In-Situ Nuclear magnetic Resonance (NMR) technique has become a popular and an effective tool in studying the energy storage devices like batteries and supercapacitors due to its non-destructive nature and unlike ex-situ method, it enables the study over multiple cycles on a same sample and due to its high sensitivity of the 7Li nucleus, it has been used before to study Li-intercalated graphite2.

We have performed in-situ 7Li NMR experiments on the li-ion capacitor. A polyethylene - bag Li-ion capacitor (15 mm x 4 mm x 2 mm), was developed for this purpose which is inserted in the NMR probe coil, and can be cycled in-situ. The NMR measurements were made using the 600 MHz (14.1 Tesla) High Resolution Wide Bore NMR Magnet #2 facility at NHMFL, Tallahassee. The NMR setup is shown in figure 1, with the capacitor first being placed on the solid-state NMR probe coil and the probe is inserted into the magnet from below. The capacitor leads are connected to an external cycler, which performs the galvanostatic cycling on it and the NMR spectrometer connected to the probe terminals.

The Galvanostatic cycling performed on the capacitor sample in-situ, figure 1, confirms the proper operation of the sample with the electrode potentials observed as expected and the NMR spectra were recorded simultaneously at regular intervals. A part of spectra recorded during the 2nd discharge process is shown in figure 1, with an inset representing the NMR spectrum for a pristine Li-ion capacitor. It represents the 7Li signals that arise from different parts of the capacitor. Since the li-ion capacitor consists of the Li-metal in the form of SLMP layer, it appears as a broad metal peak around 270ppm and a sharp narrower peak around 0ppm is attributed to the electrolyte ions and the ions trapped in the SEI layer. In the fully charged state, the lithium is fully intercalated into the hardcarbon anode electrode, which appears as a separate broad peak around 12 ppm. During the discharge process, the intercalation peak continuously reduces in its intensity while slightly moving downfield, consistent with the electrochemical lithium extraction from anode. Gaussian-lorentian peak fitting performed indicates towards the presence of a 4thpeak increasing in its intensity during discharge, which is consistent with the electrochemical behavior of double layer formation on the activated carbon cathode.

In-situ NMR technique will certainly help improve the capacitor design by aiding in the investigation of the structure and dynamics of the processes occurring in the electrodes. Further study is necessary to improve our understanding of processes like electrolyte changes and capacitive double layer phenomenon. 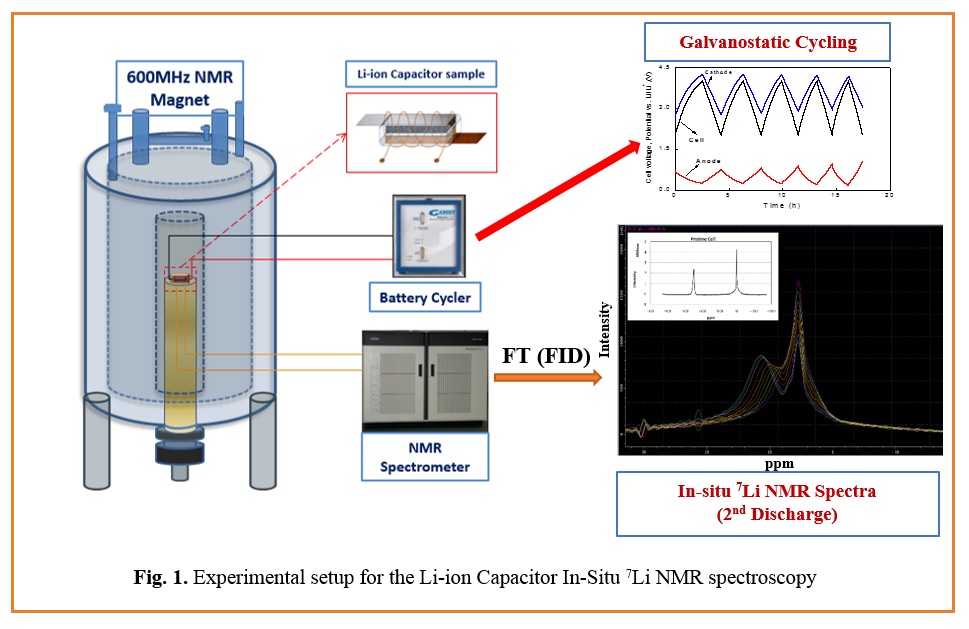