1023
Trapped State Sensitive Kinetics in LaTiO2N Solid Photocatalyst: With and without Cocatalyst Loading

In this work we report on the charge carrier dynamics in a visible-light responsive (oxy) nitride photocatalyst: LaTi2ON with and without the presence of CoOx cocatalyst. For femtosecond diffuse reflectance measurements, an amplified 150 fs Ti:Sa laser with OPA for pump (λexc= 500nm & 580nm) and white light continuum and IR light for probes are used [1]. Synthesis of LaTiO2N and LaTiO2N/CoOx powder are described elsewhere [2].

Interestingly, co-catalyst loading is found to have a suppressing effect on this slowing down of this relaxation of shallow trapped electrons to deep-trapped states as well as a decrease in TA intensity of the shallow trapped carriers.  As can be seen in Figure 1b, the larger the amount of the cocatalyst, the faster is the decay and smaller the TA intensity. Thus, it is evident that cocatalyst loading has an impact on the carrier dynamics but, a better knowledge of the cocatalyst distribution, size etc. is necessary to strongly comment on the observation. At this point we lack this information.

However, based on literature we can very loosely comment at this stage that probably due to charge transfer from the photocatalyst to the cocatalayst (TA data implies in <1ps which is very fast), the decay becomes less sensitive to λexc.  Infact, a previous study on Co modified single crystalline LaTiO2N reports ~27% quantum efficiency at 440nm [2]. CoOx deposition was found to prolong the lifetime of mobile carriers (2000 cm-1) to a time scale of 1 second. 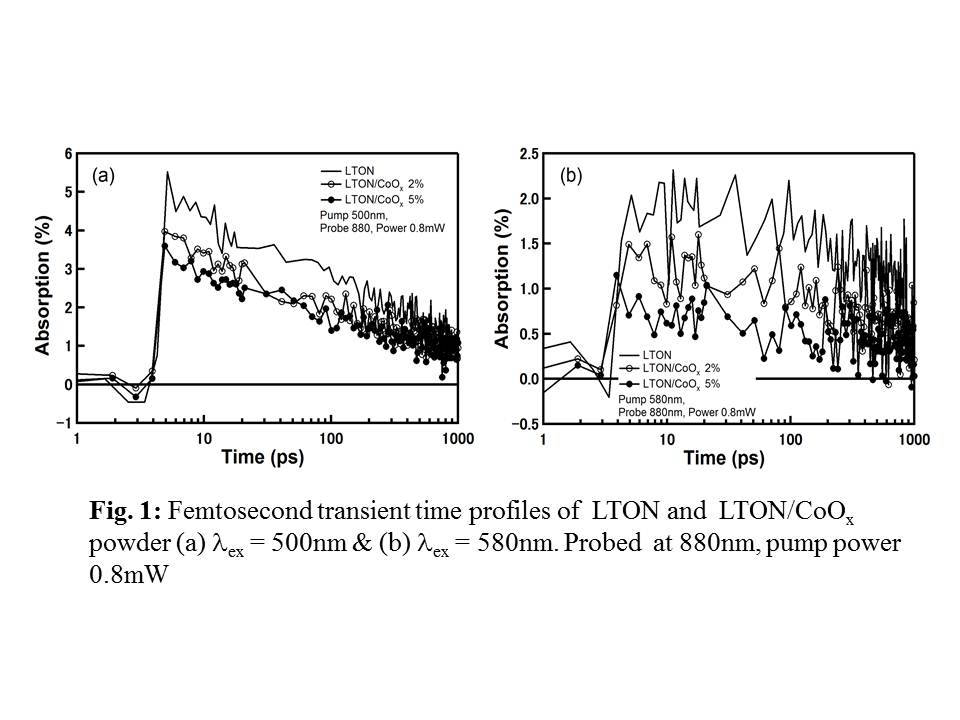