Floridian Ballroom F, Lobby Level (Hilton Orlando Bonnet Creek)
K. Ikeda (Hokkaido University, JST-PRESTO), J. Hu (Hokkaido University), and K. Uosaki (National Institute for Materials Science)
Surface enhanced Raman scattering (SERS) spectroscopy is normally conducted at a roughened surface of coinage metals.  Although the nanometric surface roughness is needed for the signal enhancement, the use of the roughness often prevents deeper understanding of metal-molecule interactions at a specific surface site.  Moreover, very limited surface enhancement is available on platinum group metals (PGMs) because of their localized d-electrons.  In the field of electrocatalysis, it is essentially important to study molecular adsorbates on an atomically defined catalytic metal surface under electrochemical conditions.  Therefore, these disadvantages limit application of SERS technique despite the potential of this technique for in-situ observation.  Recently, there are several reports on SERS observations on single crystalline metal surfaces including non-SERS-active PGMs, in which the signal enhancement is induced by using sphere-plane type nanogap structures.1-6 In the present work, we observe SERS spectra of arylisocyanides adsorbed on catalytic metal substrates of various surface features at nanometric and atomic scale.

Single crystal beads of gold, platinum, and palladium were obtained using the Clavilier method.  The (111) facets of these beads were utilized for SERS observation.  Pd-modified Au(111) was electrochemically prepared using the underpotential deposition (UPD).  Pt-modified Au(111) was obtained by galvanic replacement of Cu-UPD monolayers on Au(111) with Pt2+ions.  As a model Raman scatterer, 4-chlorophenylisocyanide (CPI) was utilized to form self-assembled monolayers (SAMs) on these metal surfaces.  SERS measurements were conducted using a home-built Raman microscope with a 632.8-nm He-Ne laser light source after Au nanoparticles (Au-NPs) were physisorbed on top of the SAMs.  Electrochemically roughened metal surfaces were also utilized for conventional SERS measurements.

Figure 1 shows AFM images of electrochemically roughened polycrystalline Pt, mirror finished polycrystalline Pt, and single crystalline Pt(111) facet.  One can see that the height of the surface features is around several 10 nm for the roughened Pt, a few nm for the smooth Pt, and monoatomic height for Pt(111).  Among these surfaces, SERS effect is available only on the roughened Pt in the conventional method.  Figure 2 shows conventional SERS spectrum measured on the roughened Pt and gap-mode SERS spectrum on smooth Pt.  These spectra were very similar except for the signal intensity, indicating that the nanometric surface features do not affect molecular adsorption geometry.  In addition, the chemical contribution of the adsorbed Au-NPs to the molecules is also negligible in the present case.

On the other hand, the atomic surface feature significantly affected the molecular adsorption.  As shown in Fig. 3, gap-mode SERS spectrum on Pt(111) was very different from that on the smooth polycrystalline Pt, suggesting three-hold hollow configuration.  Moreover, when the Pt lattice was expanded by the monolayer formation on Au(111), the preferential configuration was changed to atop.  We will also present SERS observations on other crystal orientations, the controbution of step-terrace structures, and electrochemical behavior of the adsorbates on these surfaces. 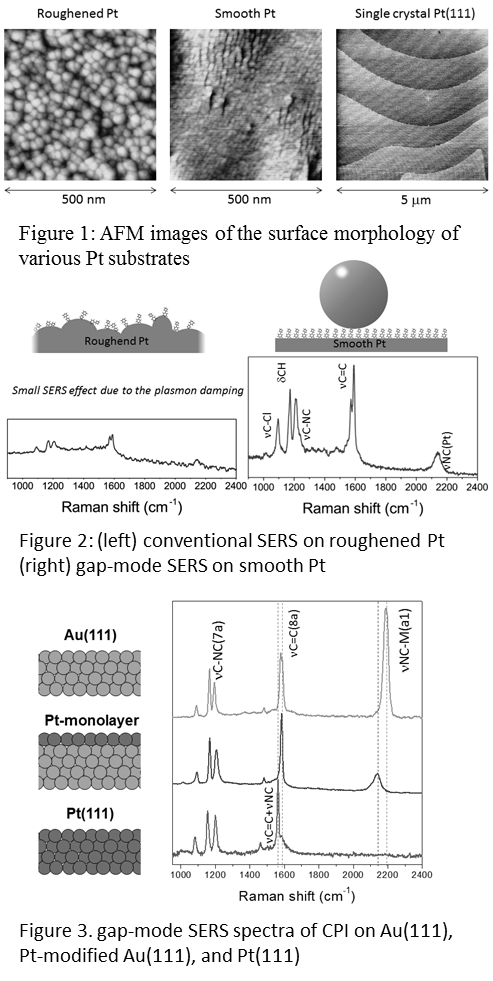