“Electrochemical photoelectron spectroscopy” has been developed1 and utilized for practical applications such as electrocatalysts for fuel cells.2 In this system, samples can be transferred from an electrochemical chamber in an ambient atmosphere to an analysis chamber kept in vacuum immediately after the electrochemical treatments without being exposed to air, so that any contamination of the surface from exposure to open air can be avoided. However, structure and oxidation state of the electrode surface may be changed during the transfer from the solution, where the electrode is under electrochemically controlled conditions, to vacuum, where potential control is not possible. Here, we constructed an in situ electrochemical XPS apparatus for the measurements at solid/liquid interface under electrochemical condition using hard X-rays and a micro-volume cell equipped with an ultrathin Si membrane.3

The conceptual design of the present in situ electrochemical XPS arrangement is illustrated in Figure 1. A micro-volume cell filled with a liquid is sealed by an ultra-thin Si membrane,4 which serves as a separator between vacuum and liquid, a window for X-rays and photoelectrons, and a working electrode for electrochemical reactions. The cell is placed in an analysis chamber for XPS and synchrotron radiation hard X-ray is irradiated to the vacuum side of the membrane. X-rays penetrate to the solution side through the membrane and photoelectrons emitted from Si exposed to the solution, i.e., at solid/liquid interface, can pass through the Si membrane, and can then be collected and analyzed by a hemispherical photoelectron analyzer. Its operation was demonstrated for potential-induced Si oxide growth in water.3 Effect of potential and time on the thickness of Si and Si oxide layers was quantitatively determined at sub-nanometer resolution.3 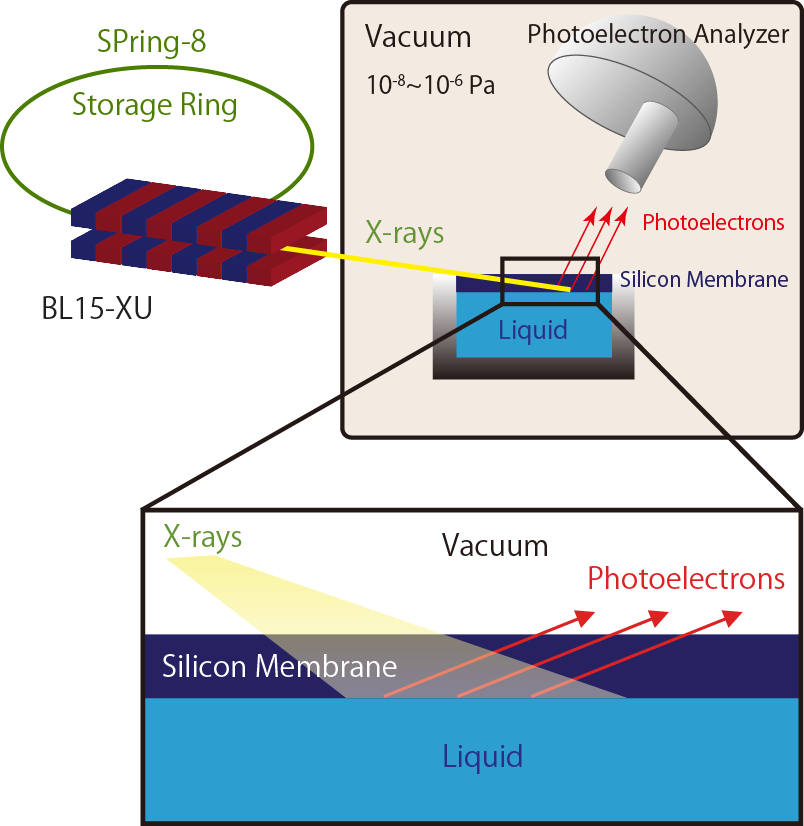