1054
Strategies to Improve the Performance of Ionic Liquid-Based Electrolytes

Floridian Ballroom J, Lobby Level (Hilton Orlando Bonnet Creek)
A. Balducci (Institute of Physical Chemistry & MEET Battery Research Center, University of Münster), R. S. Kühnel, T. Vogl (MEET Battery Research Center & Institute of Physical Chemistry, University of Muenster), and S. Menne (Westfälische Wilhelms-Universität Münster, MEET Battery Research Centre, Institute of Physical Chemistry)
Ionic liquid-based electrolytes are an emerging class of electrolytes for application in electrochemical energy storage devices. Ionic liquids display negligible vapor pressure, which leads to very low flammability. Therefore, the use of these electrolytes results particularly beneficial to improve the safety of electrochemical storage devices.  However, the conductivity of ionic liquid-based electrolytes is usually lower than that of conventional molecular solvent based electrolytes. Furthermore, the melting point of many ionic liquids is considerably higher than the desired lower temperature limit of use of, e.g., -30 °C.  Hence, the use at and below room temperature has been limited to low currents and ionic liquid-based electrolytes found application only in niche markets.[1]

Several strategies have been developed to tackle the low temperature performance issue of ionic liquid-based electrolytes. One approach is to mix several ionic liquids in order to improve the lower temperature of use and the conductivity at low temperatures by suppressing crystallization.[2]

Another option is to blend molecular solvents with ionic liquids. This approach results in much improved conductivity at the expense of increased flammability. However, a good compromise between flammability and performance can be found by selecting high flash point solvents. Mixing ionic liquids with polar solvents like propylene carbonate can lead to new issues. Aluminum metal is used as current collector on the cathode side of lithium-ion batteries and for both electrodes of supercapacitors. The presence of polar solvents in some ionic liquids can lead to anodic dissolution of Al at high potentials. This problem can be solved by a proper choice of solvent, ionic liquid anion or by the use of electrolyte additives.[3-5]

In this work we report a comparison about the advantages and the limits related to the use of the abovementioned strategy, with particular focus on the application of ionic liquids-based electrolytes in high power electrochemical storage devices. 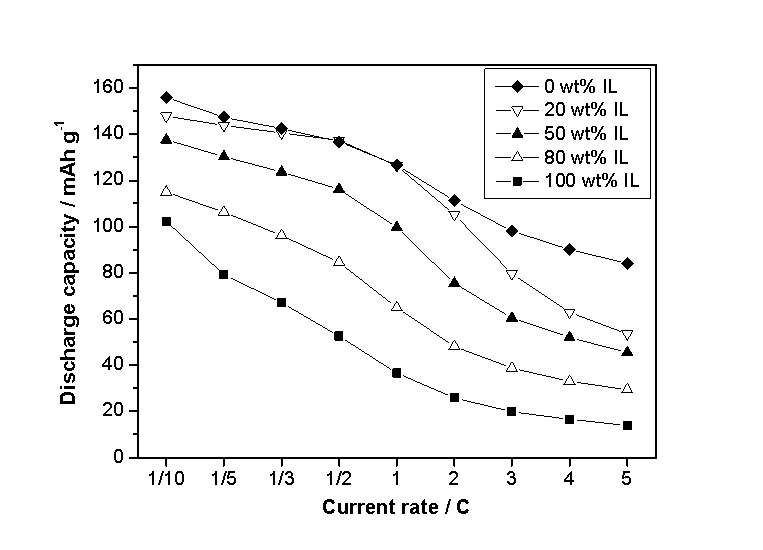