The membranes studied had EWs of 700, 825, and 1000, and each was prepared with both 10% and 20% water content (wt. %). Measurements were conducted at several temperatures. For T1 measurements, we used deuteron NMR in membranes equilibrated with D2O because of the high sensitivity of nuclear quadrupole relaxation to rotational motions (2). In order to measure diffusion (using proton NMR on samples equilibrated with H2O) in samples contained within a high pressure Cu/Be cell, it was necessary to use a spin-echo pulse sequence in the static gradient in the fringe field of a 7.3 T superconducting magnet.  Figure 1 displays isothermal variable pressure T1 results obtained for the 700 EW membrane with 20 wt. % D2O. It can be seen that T1 values increase with temperature and decrease with pressure.

The results for different membranes also suggest that values for T1 increase with higher membrane EW and with higher D2O content.  It is found that there is an increase in activation volume, Δv, with lower water content and lower temperatures, which was calculated using

Table 1 displays the activation volume of each membrane at various temperatures with 20 wt. % D2O.

Measurements of water self-diffusion as a function of pressure for each sample at different water content are underway.  Diffusion activation volumes will thus be obtained and compared with those for deuteron spin-lattice relaxation. Such comparison will shed light on the relationship between water translational and rotational motion inside the ionomer, and hopefully lead to insight into the proton transport mechanism.

This work was supported by the Office of Naval Research. 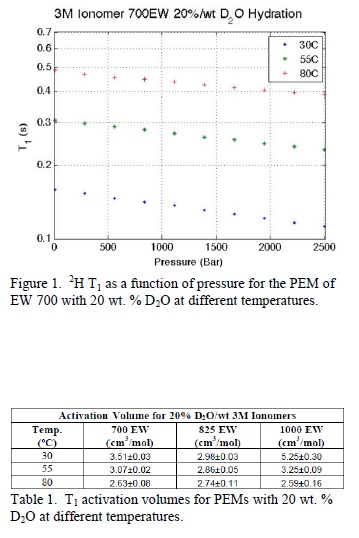