Floridian Ballroom G, Lobby Level (Hilton Orlando Bonnet Creek)
S. Babanova, R. J. Lopez (University of New Mexico, Center for Emerging Energy Technologies), Y. Ulyanova, S. Singhal (CFD Research Corporation), and P. Atanassov (University of New Mexico, Center for Emerging Energy Technologies)
Very promising area of enzymatic fuel cell (EFC) research is in regards to a family of enzymes known as multi-copper oxidases (MCOs), which are capable of performing oxygen reduction reaction (ORR). Recently, MCOs have been shown to compare favorably to other state of the art ORR catalysts due to their activity at moderate temperatures and neutral pH at which they operate1. However, despite continuing research and on-going advancements in biocatalysis, relatively low catalyst stability (e.g. decreasing enzyme activity) and low current density, compared with traditional fuel cells, are impeding widespread application of EFCs. Specifically, enzyme biocatalyst activity and subsequent cell potential and current density decrease over time due to the inherently short lifetime of the enzyme and/or low interfacial electron transfer rate between the electrode and the enzyme. Improving enzyme stability and optimizing the interfacial electron transfer at the electrode is a key area of EFC research.

The interfacial electron-transfer of MCOs is dependent on the spacing between the enzyme (the T1-Cu center) and the electrode surface2. To decrease the gap between the T1-Cu and the electrode, the enzyme should be “oriented” with the T1-Cu facing the underlying electrode surface. In this study a hypothesis was developed for orienting the T1-Cu site of Bilirubin oxidase (BOx) towards the electrode surface. Substrates of BOx, such as bilirubin, can be artificially attached to the electrode and subsequently used as “orienting agents” in the development of enzymatic oxygen reducing cathodes (Fig. 1)3. Two approaches were investigated in order to further improve current generation through favorable orientation of BOx on the electrode: i) “scale up” the substrate molecule through utilization of polymers or ii) “scale down” the substrate structure by the utilization of functional analogues.

Multi-wall carbon nanotubes (MWNTs) were modified subsequently by physical adsorption of tethering 1-pyrenebutanoic acid succinimidyl ester (PBSE) and orienting agent (bilirubin). The interactions of bilirubin and PBSE with the MWNT scaffold are provided by π – π stacking. At the same time the tethering agent is attached to the enzyme by enzyme`s amino groups. The interaction of bilirubin and the enzyme is ensured by the key-lock principle. Thus the nanotube matrix modified by the application of tethering and orienting agents provides enhanced electrode stability and improved electron transfer efficiency showing increased bio-cathode performance (Fig. 2). The BiRu-PBSE modified cathode showed increase in current density, compared to the PBSE, bilirubin, and unmodified BOx cathodes of 0.4, 3.2, and a 9.5 times, respectively.

As a macromolecular analogue of bilirubin a short-chained chemically polymerized polypyrrole was also tested. Unfortunately, the polypyrrole-modified cathode did not induce favorable enzyme orientation, most likely due to: i) the hydrophobicity of polypyrrole; ii) the lack of any carboxyl/negatively charged groups in the polypyrrole molecule; iii) the inhibition of the attached polypyrrole to the electronic communication between BOx and the electrode.

The “scale down” approach involved the use of two bilirubin functional analogues, pyrrole-2-carboxaldehyde and 2,5-dimethyl-1-phenyl-1H-pyrrole-3-carbaldehyde (DPy-Carb), for enzyme orientation along with PBSE as the tethering agent. The DPy-Carb-PBSE-BOx modified cathode had a significantly higher generated current density compared to both the PBSE-BOx and BiRu-PBSE-BOx scaffolds (Fig. 3).

The orientation efficiency of the enzyme after the modification procedure with DPy-Carb and PBSE was determined to be 90%. Therefore, int can be concluded that the enhanced performance of the modified cathodes is most likely due to improved interfacial electron transport as a result of favorable T1-Cu site orientation towards the electrode surface.

Favorable orientation of bilirubin oxidase on a MWNT matrix and subsequent increase in electrocatalytic activity was achieved through cathode modification with a cross-linker and the natural substrate bilirubin or its artificial analogues as orienting agents. The described herein approach can be successfully applied for other reducing enzymes from the family of MCOs used at the cathode in the development of enzymatic biofuel cells. 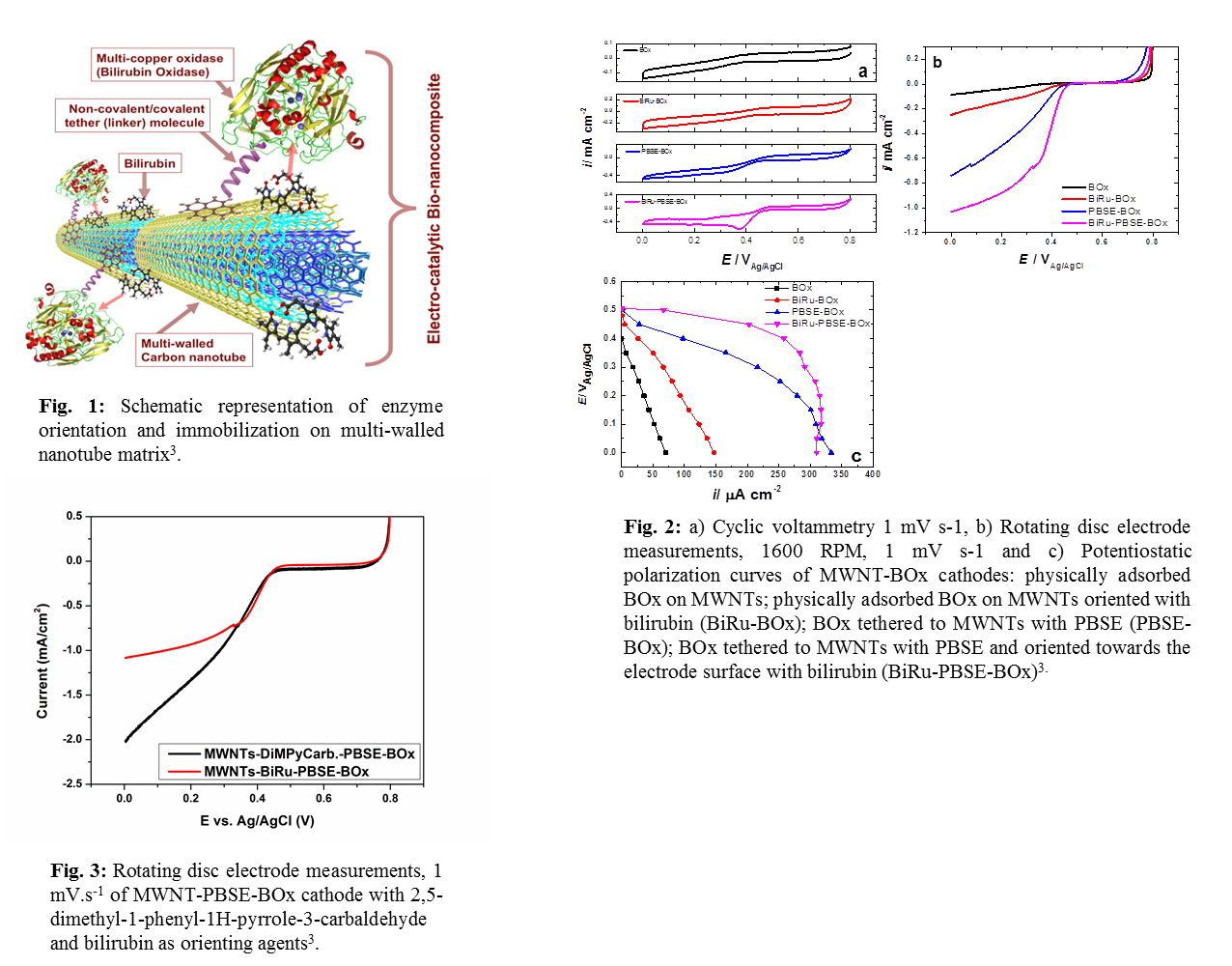