Nassau, Ground Level (Hilton Orlando Bonnet Creek)
M. Barawi, S. Yoda, J. R. Ares, I. J. Ferrer, and C. Sánchez (MIRE-Group. Laboratorio de Física de Materiales de Interés Energético. Dpto. de Física de Materiales. Facultad de Ciencias. UAM , 28049, Madrid, Spain)
Interest in hydrogen solar production from water splitting is motivated by the need to find a green, renewable and environmentally safe fuel. Hydrogen is considered as a viable option sustainable development beyond fossil fuels, especially when it is produced from water by using only renewable energy sources. The identification of low cost materials for the photogeneration of hydrogen is recently a growing field of research. In the last years, pyrite (FeS2) has received increasing attention as a material for photoelectrochemical applications1,2 and hydrogen photogeneration. Due to its low cost and not toxicity, high optical absorption coefficient, and an adequate electronic properties (Egap=1.1±0.1eV)3, FeS2 shows some advantages compared with other semiconductor materials to be used as a photoelectrode in a PEC. Previous works3,4 about the Ti doping of pyrite thin films have been reported and their properties investigated. In this work the photogeneration of hydrogen in a photoelectrochemical cell with n-type Ti doped FeS2 thin film as photoanode will be demonstrated.

Ti-FeS2 thin films have been grown by sulphuration of Fe layers (100 nm) thermally evaporated on discs in a vacuum sealed ampoule at 300 ºC.  Film morphology and crystallinity were investigated by Scanning electron microscopy (SEM) and X-ray diffraction (XRD), respectively.  Cubic FeS2 was identified as the unique phase at 300ºC (Fig1).

Electro- and photoelectrochemical measurements have been carried out using a conventional three-electrode glass cell with a quartz window (PEC) to illuminate the photoanode, i.e. the Ti-FeS2 samples used as working electrode. As counter electrode a platinum sheet was used and the reference one was a Ag/AgCl reference electrode. 0.5M Na2SO3 aqueous solution was used as electrolyte, which serves both, to increase the conductivity and as sacrificial agent. An halogen lamp (200 W) was utilized as white light source. Photocurrents show positive values, as expected  from the doping with titanium, because as far as we know, pure pyrite thin films always present p-type conductivity3, but Ti doped pyrite show n-type behavior4,5.

A mass spectrometer connected to the PEC is used to measure the evolved H2 from the photoelectrochemical water splitting. Results show that Ti-FeS2 exhibit a high flow of photogenerated hydrogen from bias potential such low as 0.5V (vs. Ag/AgCl). In fact, strong bubbling hydrogen was experimentally observed in our photoelectrochemical cell and quantified with the mass spectrometer (Fig. 2).

In conclusion, the hydrogen photogeneration by using Ti-FeS2in a PEC under bias potential has been demonstrated. Quantitative results will be exposed in the oral communication.

Financial support from MINECO (MAT2011-22780) is acknowledged. Authors thank to F. Moreno for his technical assistance. 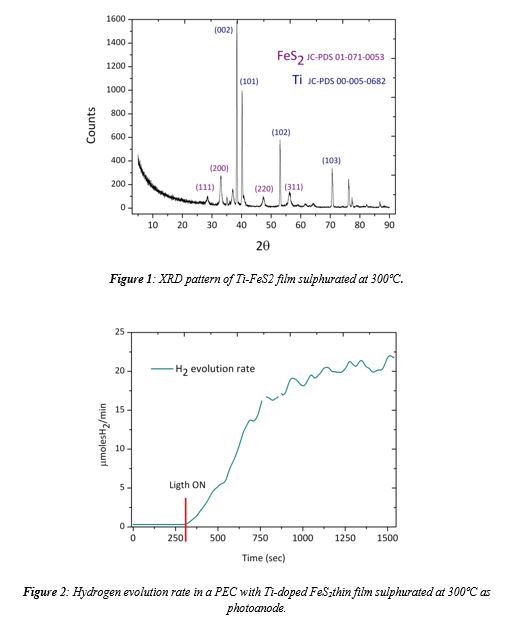