Lithium ion cells generally experience significant capacity reduction following a very deep discharge as the internal components dissolve.  As the cell is discharged below the normally imposed cut off voltage, dissolution occurs at the solid electrolyte interface (SEI) and of the copper negative electrode substrate.  As a result batteries are never designed to be completely discharged.

However, Quallion’s patented Zero-Volt technology enables a lithium ion battery to be completely discharged to an inert state, stored in this condition for an extended period, and then recharged without any permanent damage to the battery or reduction in capacity or performance.

Implementing the Zero-Volt technology does not have a negative impact on cell performance; Zero –Volt achieves comparable results for capacity and cycle life with conventional lithium ion designs.  The current implementation of Zero-Volt does impose a limitation on charge and discharge rates, but current work is stretching this performance limitation to continuous rates of 5C.

Quallion has implemented this technology in thousands of lithium ion cells for medical implant and satellite applications.  In medical devices, deep battery discharges occur due to patient non-compliance with charging protocols, and they lead to surgery to replace damaged batteries.  In space, when a satellite loses the proper attitude orientation towards the sun, the solar panels fail to recharge the battery, and a deep discharge can occur rendering the spacecraft less effective.

Calendar fade and self-discharge are unavoidable processes in a lithium ion cell that occur as the cell’s anode and cathode materials degrade over time. These processes are exacerbated by elevated temperatures, such as the condition inside the human body, and by a high state of charge, as found in a fully charged cell.

“Calendar fade” describes the permanent reduction in a cell’s storage capacity over time.  “Self discharge” describes the reversible loss of stored energy over time, which can be recovered on a subsequent charge cycle.

Test results are based on testing that began in 2003 with 15 fully charged lithium ion cells placed in storage at a controlled temperature of 37OC. Quallion performed testing on 6 of the cells after 4 years and tested another 2 cells after 10 years in storage. The remaining 7 cells will stay in controlled storage for testing in future years.

Additionally, Quallion’s lithium ion chemistry has demonstrated the ability to retain >80% of its original capacity following 2,000 charge-discharge cycles.  The chart below shows the performance of a cell cycled at 100% depth of discharge at an elevated temperature of
37 oC.

These long life data support the potential for a claim of a 20+ year battery life in an implantable medical device.  Such a long life would reduce the need for surgeries to replace batteries, and reduce the costs and suffering associated with hospitalization, recovery, and complications related to surgery. 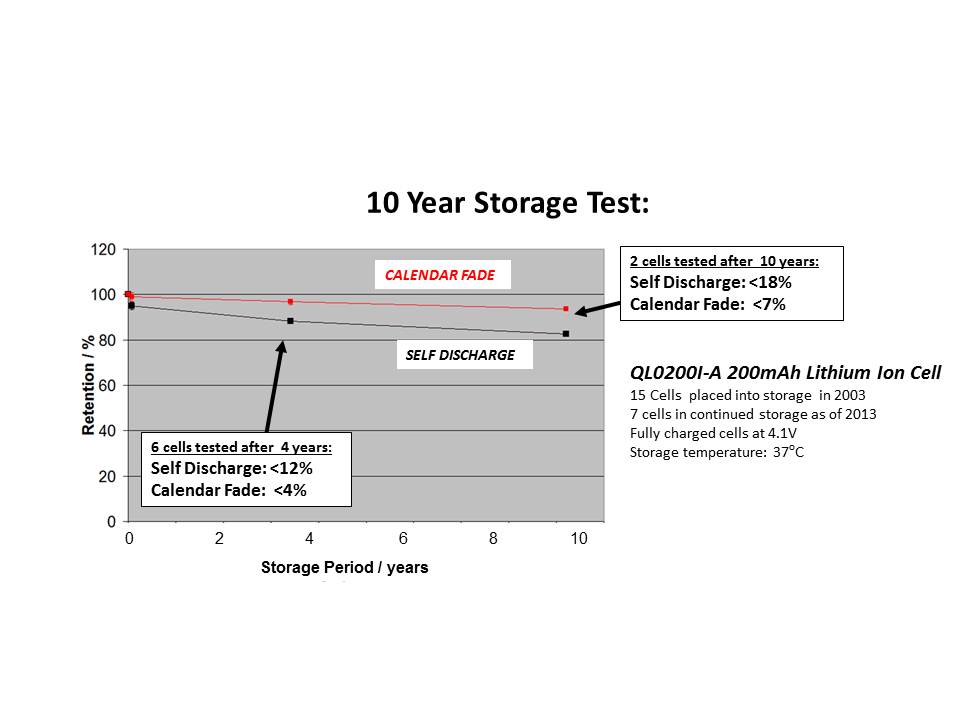