Grand Foyer, Lobby Level (Hilton Orlando Bonnet Creek)
J. K. Ko, A. Halajko, N. Pereira, J. R. Kim, and G. G. Amatucci (Rutgers University, Energy Storage Research Group, North Brunswick, New Jersey)
Research into fluoride based conversion materials has risen as a possible alternative to typical intercalation materials (eg, LiCoO2, LiFePO4) [1, 2]. Despite having higher capacity, one challenge both practically and in the scientific interpretation is the presence of a large voltage hysteresis in the lithiation-delithiation voltage profile [4]. Galvanostatic intermittence titration technique (GITT) has been used previously to identify the voltage hysteresis of these materials [5]. However, cycling in galvanostatic mode induces polarization that may affect the identification of a hysteresis that is activated by voltage overpotential. In addition, during relaxation, the voltage may not reach an equilibrium that is representative of the reaction itself. To eliminate polarization, potentiostatic intermittence titration technique (PITT) is used here-in to precisely control reactions through variation in voltage potential. Our group modified this technique in order to quantify the true hysteresis.

In order to separate the hysteresis from initial “nucleation – like” activation potential present during the first lithiation and to identify the minimum voltage required to maintain conversion, we employed reversal PITT. For this technique, we commence with the same conditions as regular PITT, i.e. lowering the voltage in small 10mV voltage steps until a predefined capacity is reached.  At that point (V1), we reverse the 10mV voltage step progression and monitor the current until the cell is unable to discharge 3mAh/g within 18 hours in a single step. Generally the current at this point is ~C/3000 and is labeled as “V3” in Fig. 1. Afterwards, regular PITT in the original direction is resumed. The voltage found at “V3” is determined to be the true reaction activating potential. Hysteresis is found by taking the difference of “V3” found in the lithiation and delithation direction at similar lithium contents (Lix). In our study, cells were lithiated 10mV steps with a 0.4mA/g (<C/1000) current cut-off until the following capacities are reached: 100, 198, 200, 290, 450, and 480 mAh/g.

FeF2 was found to have a hysteresis of 1.28V as shown in Fig. 2. On lithiation, reversal PITT was initiated at x=0.70 in LixFeF2 (200mAh/g) in the middle of the conversion reaction at 1.85V. FeF2 was able to maintain this conversion until 2.05V. This large potential difference is consistent to the “nucleation – like” overpotential from galvanostatic cycling. [6]. The theoretical voltage for this conversion reaction FeF2 + 2Li → 2LiF + Fe is 2.66V. On delithiation, reversal PITT was initiated at 3.38V at a LixFeF2value similar to lithiation,  and was only able to maintain delithiation for <50mV . The results indicate a voltage hysteresis on the delithiation reaction with little nucleation reaction induced polarization.

Finally, to quantify the electronic component of the transport of converted FeF2, conductivity measurements were performed on a chemically lithiated FeF2 on an interdigitated electrode (IDE). Films of different thicknesses (50, 100, and 200nm) were deposited on a 250nm IDE so that the film sits in between the fingers of the IDE. They were allowed to soak in a 2.5M solution of n-butyllithium in hexane until the majority of the film has converted. DC polarization was performed at 20mV and 200mV and the decay in current was measured. As a comparison, electrochemical impedance spectroscopy (EIS) was also performed. Conductivity was determined from the contact surface area and the percentage of converted material which was determined by x-ray diffraction (XRD). These results will be discussed in the context of charge transport relative to other conversion materials.

This work is financially supported by the Northeastern Center for Chemical Energy Storage, an Energy Frontier Research Center, funded by the U.S. Department of Energy, Office of Basic Energy Sciences, under award contract DE-SC0001294. 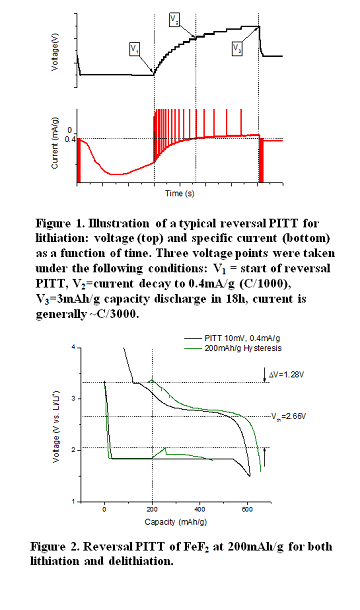